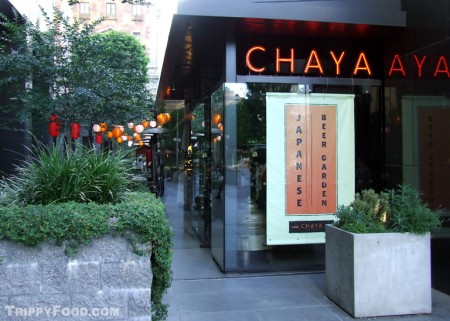 Summer is here, and in Southern California that means long hours of daylight, the perfect conditions for al fresco dining (and drinking). For the second year in a row, the Tsunoda family has taken advantage of the warm summer evenings by reviving their annual Japanese Beer Garden at the Chaya Downtown location. As the warm sunlight switches over to paper lanterns, patrons on the outdoor patio can select from a variety of Japanese beer, sake and whisky as well as small, shareable dishes that help absorb the high octane spirits. Although they bill the summer special event as a Beer Garden I decided to forego the brewskis for a distilled sipping beverage with a kick. The menu listed 2 whiskeys (Hibiki 18 year blended and a Yamazaki single malt), but not being a whiskey sommelier or whiskeymeister (or whatever a whiskey expert is called) I opted for the Hibiki as it was the first one listed. The drink was smooth, smoky and a little sweet, and oddly enough after a sip of the glass of Yamazaki one of our party ordered, I think I preferred the middle class brew. 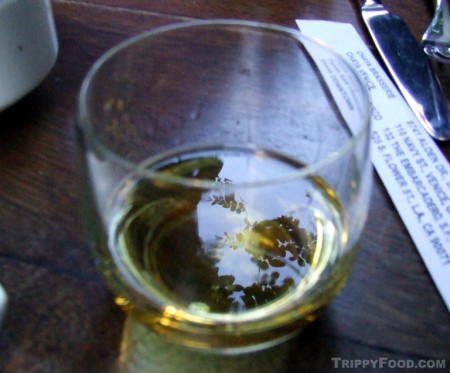 Chef de Cuisine Kazuya Matsuoka and Executive Chef Shigefumi Tachibe were on hand to bring out the dishes and shed a little light on exactly what we were eating. The first item suffered from a case of mistaken identity – it was a Japanese take on elote with the substitution of Japanese mayonnaise and feta cheese and a liberal sprinkling of cilantro. The white corn was incredibly sweet and the condiments artistically squirted and sprinkled on the cob gave it some spice and a creamy finish.  Equally as confusing and tasty was their rendition of poppers – spicy tuna-stuffed shishito peppers dunked in tempura batter and fried. The peppers were light and still had some crunch left in them, but I couldn’t help thinking that they reminded me of fried green mice (which, as you probably know by now, is not a negative). 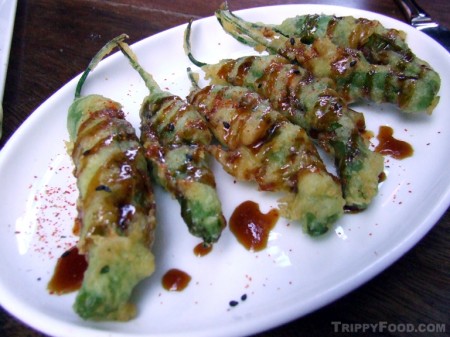 The fried oysters were delicious; I often become suspicious of highly perishable foods hiding in a sheath of fried batter, but there was none of the low tide funk sometimes present with fried seafood. The other party guests must have given in to reliving a bad oyster memory as I seemed to inherit the lion’s share. Chaya’s crispy-crusted kimchi flatbread was more like a pizza than a kimchi pancake, but unfortunately there was a Parmesan snowstorm on top that actually muted the flavor of the kimchi (a condition I never would have believed possible). 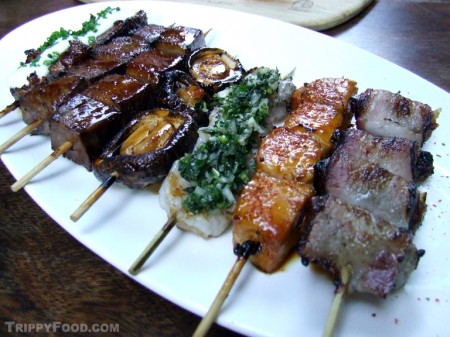 A variety of yakitori and kushiyaki skewers

The Yakitori and Kushiyaki skewers were immensely popular and with good reason – each bore morsels of mouthwatering goodness including bacon-wrapped Medjool dates; moist chunks of chicken; lightly-grilled shrimp with a fresh green dressing; soy marinated shitake caps; tender short ribs; and, last but definitely not least, perfect little cubes of beef tongue. Although each skewer had its own personality, the tongue was a standout – the sweet meat die were braised for 2 hours before finishing on the grill, resulting in meat that melts in your mouth (and who doesn’t like that?). 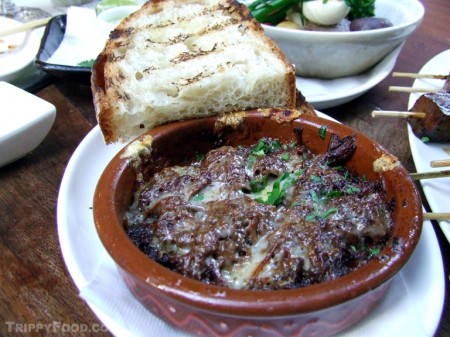 As with the aforementioned fried oysters, the Hokkaido scallop miso gratin (hold the puns, please) could have gone horribly wrong, but the kitchen staff has obviously done their homework, dishing out a scallop dish where the shellfish are not only tender and tasty, but accented by the yuzu ponzu sauce without being overpowered. The meat dishes were cooked to perfection; a cheesy Kobe beef casserole tasted so good we opted not to top the accompanying grilled Panini bread with it and an outstanding dish listed as “Coffee BBQ pork” sat in a shallow puddle of a sweet sauce with specks of coffee in it and a spicy red sauce. 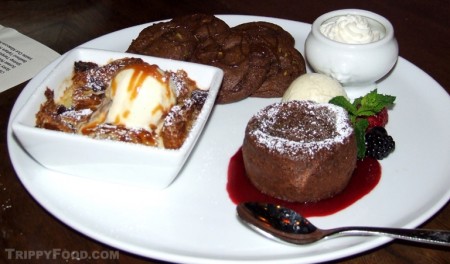 A variety of desserts

Some diners bypass small-dish sharing of banchan or tapas thinking that there’s not much substance, but I was stuffed enough to be reluctant to try the chocolate assault brought out for dessert featuring fresh baked chocolate pistachio cookies, a bread pudding made with croissants and something called “foaming chocolate cake” that looked like a Hershey Mount St. Helens. I enjoyed the texture of the bread pudding and preferred it to the sweet lava pastry, although I have to say that the pistachios went well with the chocolate in the cookie.
The days grow shorter, as does the opportunity to experience Chaya Downtown’s Japanese Beer Garden that only runs through September. Don’t worry if you forget to try the Japanese beer – Oktoberfest is right around the corner, so start getting your kimono and lederhosen ready.