The Art Of Grilla Warfare 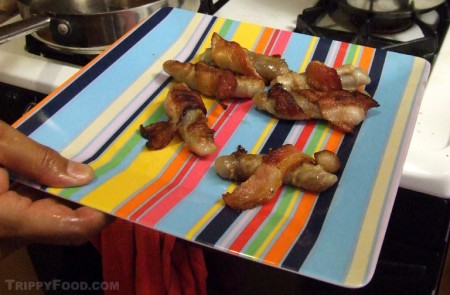 To be honest, I thought I had coined the term, but as it turns out the bizarreBQ is becoming as synonymous with summer outdoor dining as a picnic in Central Park (if the main course happens to be a member of the of the order of mammals known as rodentia). Author, foodie, friend and sometimes TV celebrity Eddie Lin and I had been discussing having a bizarreBQ for some time, and the opportunity to do so recently became reality (and quite possibly reality TV). The term denotes using a smoking, roasting or grilling process to cook food of an unusual nature al fresco. A Google search gets hits from people who simply grill pickles or spaghetti and call it bizarre, but a truly off-the-wall grilling adventure requires stocking up at your local neighborhood ethnic market. Eddie provided his backyard for the festivities; he was elected grillmaster, while yours truly was sous chef for a day. We worked out the menu details in advance, selecting BBQ turkey necks and oxtails, grilled frog legs and octopus skewers and the pièce de résistance to be named later in the article. The event was being filmed for footage to be used in a television pilot, and I was more than happy to play the hired help and prepare some of the food ahead of time. I had made a marinade for baby octopus based on a recipe Eddie had sent and had the armed mollusks bathing in the soy, sake and ginger-based elixir overnight. I also decided to bring a fresh fruit salad made from jackfruit, lychee, dragon fruit and golden kiwi to give a fresh yet sweet touch to the event. 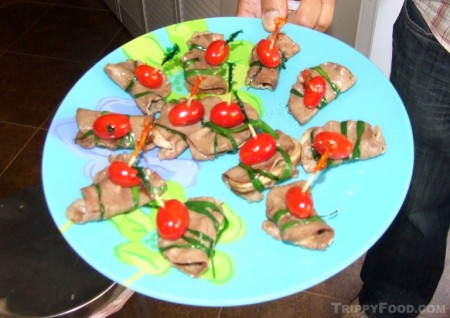 I donned an apron upon arrival and settled into my first day on the job in the sous kitchen. Eddie had planned out an hors d’œuvre of beef tongue that seemed easy to make at first, but once the assembly line got going I was like Lucille Ball in the candy factory. The tongue medallions were flash fried to just over rare, then wrapped lovingly around a sautéed crimini mushroom, stabbed with a toothpick-skewered heirloom tomato and bound with a whole chive. Ah, yes, there was the light sprinkle of sea salt and black pepper, which just now (as then) I forgot about (to the mock ire of the master chef playing a subtle Gordon Ramsay). The guests bit their tongues and noshed on some grilled fruit and vegetables (including some outstanding beets roasted right on the coals, roasted whole cherries and blackened peaches) that guest and host of other bizarre dinners, Scott Ahlberg made; meanwhile, back in the kitchen, I skewered the octopus with some baby potatoes, zucchini, cherry tomatoes and whole jalapenos. There was enough of the marinade left over to flavor the frog legs, which I had never had grilled before but turned out tender and delicious. 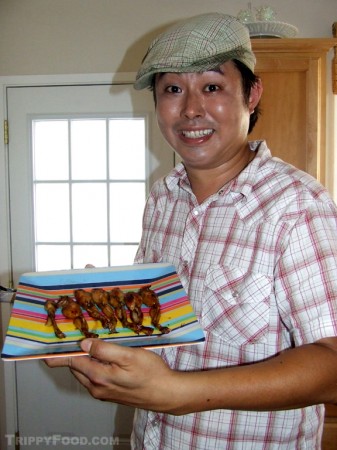 Eddie shows off the sake and soy marinated frog legs

Eddie manned the Weber, grilling Korean ribs and chicken; in the meantime, I painted parboiled turkey neck segments with barbeque sauce to be finished in the oven. Preparing the turkey necks for multiple guests was therapeutic, as I sent a Jason Vorhees kitchen knife crunching through the neck bones with a lovely series of satisfying, audible cracks. Working in the kitchen it was hard to tell how the guests were reacting to the food – I brought along the remainder of the hormigas culonas my sister-in-law returned with from Colombia, and we placed them in a bowl along with some chapulines from Guelaguetza to tide over the guests between courses. The oxtails were done in the oven before the turkey necks, but prepared in the same style; the sweet and tender meat fell off the bones and gave me the strength to soldier on working the stove. Eddie popped in occasionally to make sure I got a taste of the food before it disappeared. When the kitchen work was done, he relinquished the grill so that I could have the octopus grilling honors. The limp mollusks looked as if they were going to slide through the grill to the fiery coals below, but they have a neat little trick of letting you know when they’re done – the arms curl back towards the body making the octopus look floral. The marinade had a high sugar content, caramelizing on the octopus and imparting a nice, dark brown color and the perfect amount of sweetness. 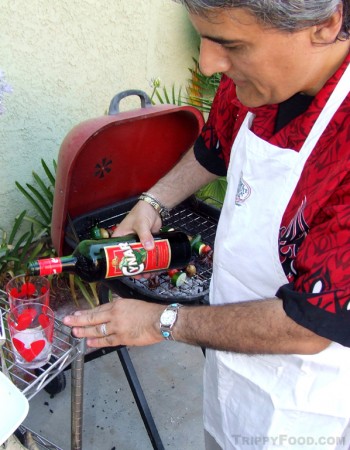 At the end of the day, it is Cynar time

The high point of the meal (if only for the entertainment value) was the final course – bacon-wrapped bull penis. You heard me right folks; not only does the bull lose, he often loses big time. Eddie had parboiled the moo tool earlier, taking care not to overcook it (contrary to popular belief, in the kitchen a hard penis is a detriment, at least from a culinary standpoint). He wrapped the Bobbitized segments each with a strip of bacon and then pan-fried them in the fat from the bacon. The look of horror on the face of the guests was classic as the bull penis was served, and although there was some morbid curiosity, no one wanted to be the first to sample it. I don’t remember ever turning down an edible, and so I dove in and grabbed the bull by the horn; it was more about texture than taste. There was a very slight chewy component (subdued by the perfect preparation), and a somewhat spongy center – there was only a slight beef taste, but to be honest most of the flavor came from the bacon. I think it served better as a conversation piece than a meal, but since there seemed to be a surplus I had a few more pieces. With all the cooking complete, I felt that as a sous chef I should sit on the stoop and have a smoke and a drink, but not being a smoker I opted for the latter. I had chilled a bottle of Cynar (an Italian bitter made from artichokes) and it seemed like the perfect time to have one on the rocks. Some of the guests likened it to the best NyQuil they’ve ever had (which was complementary); it had a slight taste of narcotic cough syrup with a bitter finish from the cynarin in the artichoke. Having another event to attend, I didn’t stay for the fruit salad, but bid adieu having learned a little about what would work better later in the summer when staging a bizarreBQ on a grander scale.

Cooking over coals outside on a summer day is an American tradition, but try to add a little fun by grilling on the wild side. I would advise dropping the pets off at a neighbor’s house, however, lest your guests mistake them for a menu item.

One Response to The Art Of Grilla Warfare