Candy Is Dandy But Licorice Quicker 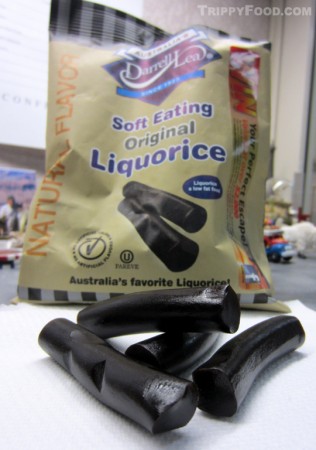 Not since Marmite has a substance either generated instantaneous revulsion or evoked a deep breath and a smile; to some it has the effect of Kryptonite, while others are instantly transported back to when they were children, walking out of the corner store with the familiar rattle of a box of Good & Plenty in their hand. To those when asked if they like licorice who answer, “I like red licorice” I can only assume the Monkees are your favorite British Invasion band. As there is no cheese in head cheese, coffee is not a bean, and peanuts are not nuts, there is no licorice in red licorice. True licorice is an extract from the root of a member of the legume family (again with the beans) usually made into candy form with molasses resulting in the dark color. Licorice root is naturally sweet but also with a slight medicinal burn; although it is often mistaken for anise/fennel, the plants are unrelated. Some licorice is also flavored with anise, which gives it a familiar aroma as well and resulting in confusion with many anise-flavored liquors such as ouzo, Sambuca, absinthe, pastis and aguardiente thought of as “tasting like licorice”

On a personal level, I have a love for licorice that has evolved into an addiction; I must cast a pathetic dark silhouette cruising up and down the seedier side of town looking for that all-night Stop and Shop where I might be able to score a $2 bag of Scottie dogs. When my eldest offspring was but a wee food adventurer we were taking in an exhibit at Boston’s Museum of Science that delved into the sense of smell; several unmarked containers had lids that could be opened to allow you to guess what the smell released was. Juli could not correctly identify the smell of a musk deer (afterwards dubbing it “deer-ass”), but after opening the lid with the aroma of black licorice, both of us headed for the museum gift shop to see if we could score a fix.

I’ve loved licorice candy as far back as I can remember; Twizzlers are now synonymous with the aforementioned pretender to the throne, “red licorice”, but black licorice was the original confectionery company’s flavor of choice since the mid-1800s. A competing candy manufacturer (American Licorice Company) has manufactured “that red stuff” under the name Red Vines since its inception in the 1950s, thankfully giving a less deceptive name to the candy. Since the dawn of the 20th century, the New England Confectionery Company’s Necco Wafers featured licorice (the black disk) as one of the original flavors, and it continues to be included in the candy manufactured today (which incidentally makes a great projectile in a plastic tracer gun).  Good & Plenty has been chock full of licorice goodness since 1893, but part of the guilty pleasure of eating them was pretending they were pills. Good & Plenty had the extra added bonus of having a hard candy shell, either white or pink (with the pink ones allegedly getting their color from crushed insects). 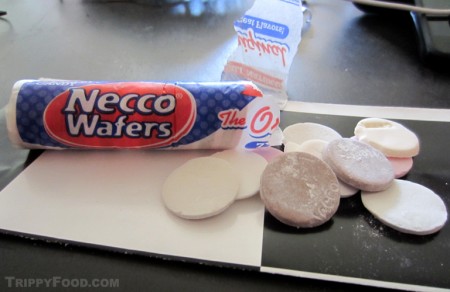 Licorice candies are also available in bags or loose form; Australian licorice is sweeter and softer resulting in happier dental technicians everywhere. Panda brand licorice comes in small boxes and while a little chewier than Australian licorice is packed with more flavor. Most candy stores that have loose bins of candy will have Scotty dogs, a firmer and teeth polluting form of the candy – although the licorice flavor is pretty intense, you’ll need about a box and a half of floss after consuming a handful of them. For those who like their licorice somewhat muted, all-sorts are a licorice candy that originated in Britain with additional flavors and textures including nonpareils, coconut and fruit-flavored gelatin creating a nice entry-level foray into the world of licorice. A word of advice – stay away from Trader Joe’s all-sorts – they come in a plastic bag which usually reduces the candy to a gelatinous sticky mess. For a walk on the wild side (Finnish-style), there’s salted licorice. The Finns take the familiar Swedish fish shape and make a licorice that utilizes salt in the manufacturing process; this isn’t licorice candy with salt crystals sprinkled on to it, the salt permeates the confection all the way through. I am a self-confessed licorice junkie, but I can’t get past a single piece of these saline treats – eating one makes me wish it was actually made of some tiny black fish. 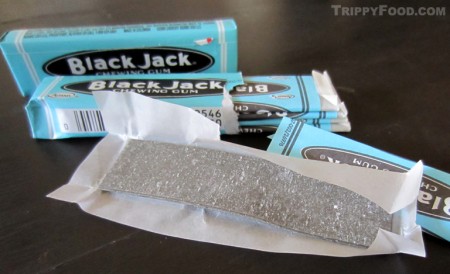 When you’re leading an army of several thousand to the Alamo to quell the uprising (or attending Occupy San Antonio), why not have a stick of Black Jack gum in honor of the exiled Mexican general that inspired it. In 1884, New York businessman Thomas Adams created the first flavored chewing gum (Black Jack) after encountering General Antonio de Santa Anna chewing on chicle he brought with him to Staten Island. The gum was out of production for years, but nostalgia has brought it back through Cadbury, the company that acquired Adams – if you’re so inclined, you can also get clove gum, another of the early flavors. At Rocket Fizz (a candy and soda store in the western U.S.) you can pick up your Black Jack gum and a variety of licorice candies as well as a bottle of their house brand of black licorice soda that packs a flavor punch with the unmistakable licorice taste and aroma. 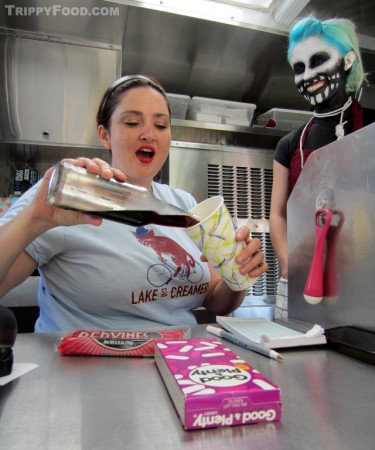 Los Angeles gourmet food truck Lake Street Creamery (CLOSED) is more than an ice cream truck – it’s like an ice cream parlor on wheels, right down to the gold leaf script lettering and red awning where you order your frozen confection. Lake Street Creamery has a variety of unique flavors, including one called Pancake Breakfast that tastes like… well, like a pancake breakfast, but what brought me to the truck was to try their homage to Black Jack gum – the licorice-flavored Black Jack ice cream.  In addition to scoops, Lake Street Creamery will happily make floats for you, and their Weird Creep will combine a scoop of Black Jack with grape soda. I was in the market for a float, but wanted something that gave that extra push over the licorice cliff, that took the flavor to eleven. Proprietor Beth Colla was kind enough to make me a float using a bottle of the Rocket Fizz black licorice soda and a scoop of the Black Jack, garnished with Good & Plenty and functionally accompanied by a pair of black licorice straws. The result was an all-out assault that made my head explode in a cataclysm of licorice flavor; the cold, creamy treat screamed licorice while not being so overwhelming to only allow a taste. It was a magnificent celebration of licorice, a licorice-lover’s dream come true, the ice cream permeating the soda and being amplified by the flavor imparted from slurping it up from the straw, with the licorice pellets remaining from the denuded Good & Plenty adding chewy component to the ice cream left at the bottom. A shot of aguardiente would make this the perfect hot summer adult drink for the licorice aficionado. 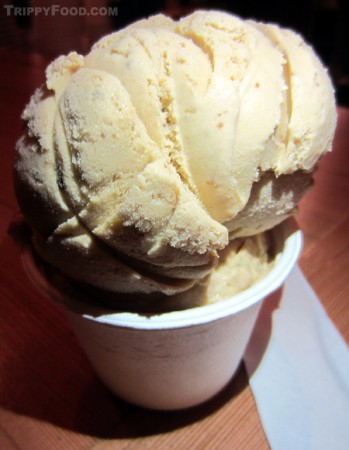 Sisters Lisa Herlinger-Esco and Becky Burnett started out selling ice cream sandwiches at Portland Farmer’s Market in 2004, working at it six years before opening their first Ruby Jewel ice cream shop in Portland, Oregon. Eschewing the standard Open/Closed sign most restaurants use, Ruby Jewel has a neon “scooping/not scooping” notification poised prominently over the doorway. There are about 7 standard flavors they scoop on a daily basis, but Ruby Jewel delves into the unusual on occasion to offers flavors such as sweet potato pie and cranberry ginger. One of these occasional flavors gives pause, even for licorice aficionados – salted black licorice. The first odd quality of the confection is its dark beige color (the expectation being that it should be black); this is natural, as Ruby Jewel doesn’t add any artificial coloring to their ice cream. Because of the cream and sugar, the sour edge of typical salted licorice is subdued – the licorice bite doesn’t settle in until after the first few spoons. As popular as this seasonal treat is, approach with caution – this dessert is in league with garlic and soy sauce ice cream in that you have to understand what you’re getting yourself into. Even for licoricephiles, I highly recommend a tester spoon first. 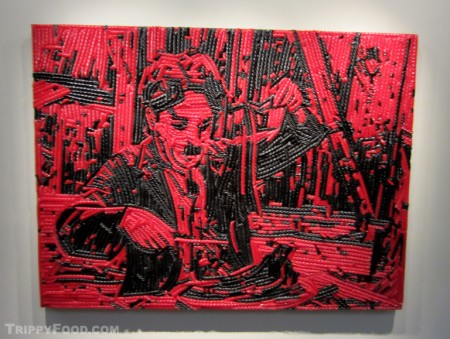 If you love licorice enough to hang it on your wall, Jason Mecier (the Rembrandt of Red Vines) can do a portrait of you in Red Vines and licorice straws. The candy is glued to plywood and then laquered, but the art is better appreciated taking a few steps back. Mecier recently did a show entitled “Licorice Flix” at the iam8bit gallery in Echo Park in which he rendered television and movie stills with a candy, licorice or red and black reference in Red Vines and black licorice. The fun part is figuring out the tie-in, and although I was tempted to start at  corner of Willy Wonka and work my way across, the glue and lacquer render the art inedible. Even iam8bit’s logo was cleverly recreated in Red Vines.

Licorice is an acquired taste, and some are never able to acquire it, but once it grabs you there’s no letting go. I hope I can explain to the Feds that all those plants under the UV lights in the shed are actually licorice…

GALLERY: See images of the ton of licorice Val has consumed in his quest for licorice nirvana

4 Responses to Candy Is Dandy But Licorice Quicker