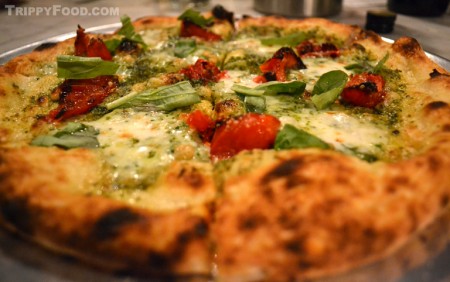 Does Los Angeles really need a new pizza joint? Well, it couldn’t hurt. There are a plethora of pizzerias throwing their dough in the ring but coming up short when it comes to churning out quality pies, with fierce competition in a city that has a long way to catch up with New York and Chicago. Urbano Pizza Bar is kicking it old school with pizzas made in wood fired ovens that have a traditional crispy charred and bubbly crust but meld a variety of unusual ingredients together on top. The location is a bit odd – on its downtown Los Angeles corner the space looks like it would be more comfortable as a CVS or mobile phone store than a pizzeria, but that all changes once inside. The decor is a throwback to days gone by with rough-hewn wood paneled walls, tin ceilings, a wooden floor and counters, tables and fixtures reclaimed from old downtown structures. One long marble-topped table runs almost the length of the room; attached wooden swivel stools swing out from beneath the table like old high school cafeteria seating while tomato cans hold silverware and napkins. The surprising aspect of Urbano is space – although you may find yourself eating communal-style at the ling table, there’s a ton of elbow room. There doesn’t appear to be anchovies available as a topping on the menu, nor will you feel like one packed into a tin. 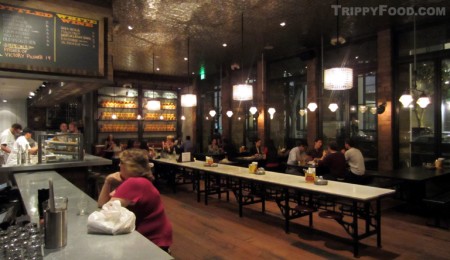 Everything old is new again, including communal cafeteria seating

Most of the menu items utilize the brick ovens, with most of the starters and wood-fired items comprised of roasted vegetables. The menu was developed by Top Chef winner Chef Ilan Hall who also commands the kitchen at nearby The Gorbals; Chef Hall was on hand on my visit to personally bring out some of the dishes being served. The la Querica prosciutto Americano was mild, flavorful but without the smokiness of Iberian or Italian ham; the thinly sliced ham came unadulterated on a metal tray and since it was the first item brought to the table I mistakenly expected the other menu items to be mild or bland in nature. A stack of artisan pizza bread was crusty and airy, charred with a hint of smoke; the chunks of bread were lightly coated in an almost translucent lathering of fresh, coarse tomato sauce making it the perfect dish for something light at the bar to absorb your alcohol. 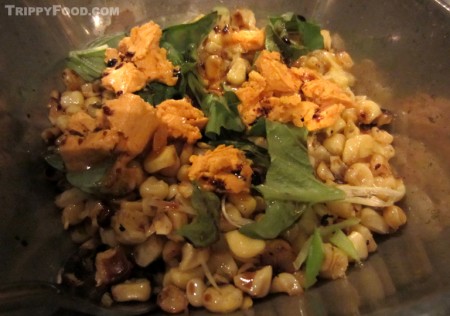 A bowl of roasted corn was dressed with a balsamic aioli, greened up with crisp, fresh basil and topped with a bizarre orange balsamic butter that dissolved over the corn. The kernels were firm and fresh and the flavors from the other ingredients accented the corn without killing the flavor. The vegetable dishes were amazing – roasting preserved most of the snap in the eggplant caponata with baby squash and created a nice texture on the outside of the fingerling potatoes that almost made them taste grilled. Urbano’s meatballs are served on what is essentially a toasted pizza dough English muffin – the flavor of the rare meat is allowed to come through with a conservative application of sauce topped with cheese shavings and fresh basil. Although the Chef Hall’s presentation was nice, I was secretly lusting after a meatball sub stuffed with these savory orbs. 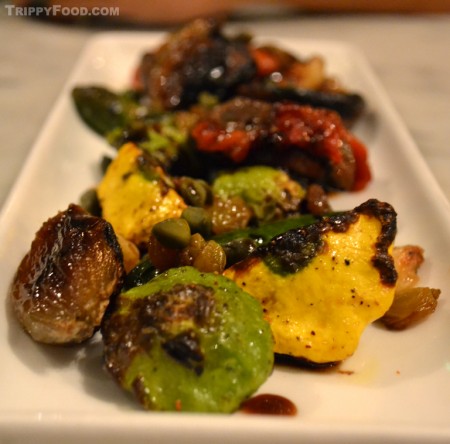 A caponata of eggplant and baby squash

The main event at an establishment called Urbano Pizza Bar is obviously the pizza, and I recall having a low expectation level when I arrived that was vaporized in the wood fire when the pies were brought to the table. The scimmietta was breathtaking – the tell-tale sign that something was different was the orange topping where one traditionally finds the tomato sauce. In its place was a sweet pumpkin purée and dancing about the surface was crispy bacon, unmelted chunks of goat cheese and shredded basil. I have enjoyed pumpkin and bacon (prosciutto) pizza elsewhere, but Urbano’s turns the whole thing sideways with the pumpkin being the wet work as opposed to a chopped vegetable topping. The flavor of the pumpkin permeated each slice, and the texture of the pie was perfect – neither hard and crunchy nor limp and soggy. 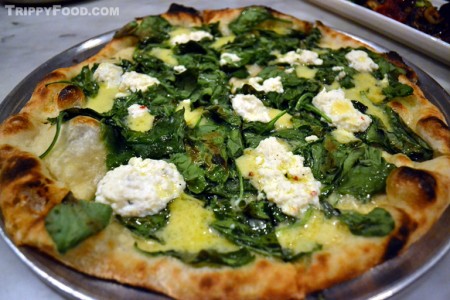 The Testa Verde with ricotta and Irish cheddar cheeses and spinach

The Selvatica had a wonderful taste from the basil pesto merging with the gooey, melted cheese and the flavor of the roasted sun-dried tomatoes and crunchiness of the toasted pine nuts. There were fresh chopped basil leaves added at the end on top, but they really added only color since there was enough basil flavor imparted from the pesto. I thought Testa Verde was an appropriate name for their ultra-green pizza, although it almost demanded an Irish name – lumps of firm ricotta cheese rose in tiny mounds out of pools of buttery Irish cheddar and an army of just-past-wilted baby spinach to create a very Gaelic-looking pie. Other pizzas such as the fennel sausage-laden Salsiccia and the wild mushroom Fungi pie had more of a traditional look about them, and I can’t be certain but they seemed to have more of a delightful char to them than the other pies. 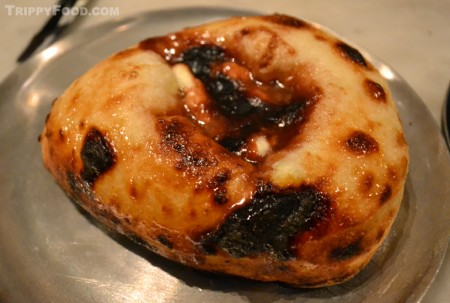 For dessert, Chef Hall brought out an experiment for us to try – a pizza dough tart with a gaping ricotta and fruit wound in the middle. A well-placed knife cut issued forth an ooze of sweet, sticky fluid, and although the taste was nice I think I would have preferred a sturdier filling; still it was reminiscent of a zeppole taking a walk on the wild side. My attitude was flipped like Neapolitan pizza chef tosses dough; the quality and taste of the pizza was a welcome surprise and it was a wonderful experience to forget I was in downtown Los Angeles for a while. Los Angeles may not rank up with the Big Apple and Windy City when it comes to pizza, but a visit to Urbano Pizza Bar will make you fugetaboutit.