Who Let The Dogs Out? 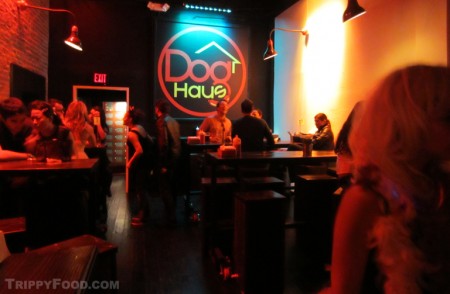 The downstairs room at Dog Haus

It isn’t easy being an upstart tube steak joint within in the Los Angeles County environs with heavy competition from senior citizens such as Pink’s, Hot Dog on a Stick, et al., and it’s even more of a challenge with more gourmet Frankenweenie establishments (including food trucks) popping up on a weekly basis.  It’s dog-eat-dog out there, but Pasadena pit bull Dog Haus recently marked the first anniversary of their North Hill Street restaurant by whelping a pup that looks poised to be the biggest, baddest dog on the street. Dog Haus just refitted the former Point 08 space on Green Street as Dog Haus Biergarten offering more space, a fully stocked bar, live music on weekends and the hot dog, burger and sausage menu items that put them on the map. 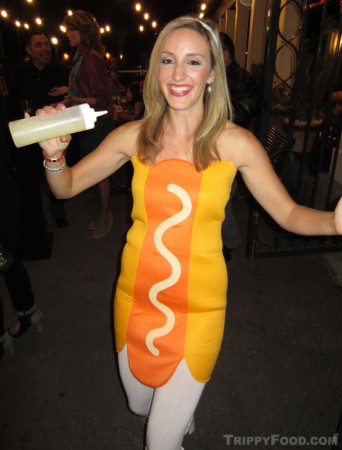 I'll leave the caption on this one up to you

On Halloween weekend, Dog Haus went all out with a masquerade party to herald the opening of the Green Street location. Since the restaurant will be piping in music from the 80s during the week, the grand opening party featured live music by preeminent 80s cover band The M80s. lead vocalist “Billy Bazzle” sported a Union Jack T-Shirt in homage to Def Leppard with a matching accent (which gradually disappeared as the evening progressed). Aside from those in attendance that chose not to don a costume, there seemed to be several 80s factions in the house – hair metal rockers, Madonnas, rappers and Olivia Newton-John workout tributes (punks were noticeably absent); the rest of the crowd was a grab bag, including a group in togas that must have assumed that “dress like back in ’80” literally meant dress like back in 80.

Libations flowed like zombie blood with the bartenders mixing signature drinks and custom cocktails as well as pouring craft beers on tap; of course you could always opt for the PBR (Pabst Blue Ribbon) in a brown paper bag to wash down your wiener. For now, the food items are essentially identical to those on the original location’s menu, but since big dog and co-owner Hagop Giragossian likes to experiment in the kitchen, I’d look for new and unique items as time progresses. For those who haven’t had the pleasure of sampling the Dog Haus’ fare at North Hill Street or at the California Philharmonic Festival on the Green concerts at the Los Angeles County Arboretum, there are some standards you can expect, such as Hawaiian sweet rolls for the hot dog and burger buns and sturdy mini-baguettes for the sausages (although they seem quite amenable to substitutions); hot dogs can be requested as skinless or with a natural casing with snap (the kind that makes great rippers); naturally there’s a veggie dog to satisfy the nature lover as well. Sausage items include a spicy Andouille, bratwurst, hot Italian or chicken for those who have something against mammal consumption; Dog Haus has worked with Chef Walter Manzke to create their sausages, although they are moving to make them in-house and as Ross Perot will tell you, it’s not pretty to watch but it sure tastes good when you’re done. 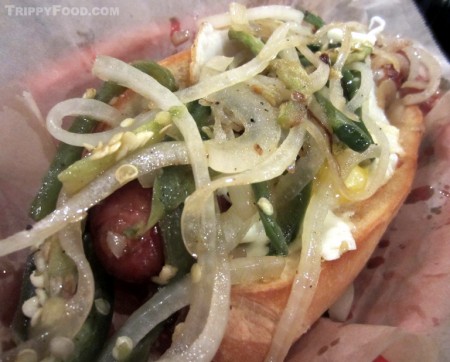 The sausage king himself, Abe Froman

Although you can build your own hot dog or burger creation there are a mind-numbing variety of toppings to choose from (both free and upgrades), so you might want to select a menu item that takes the guess work out of the equation for you. I had previously tried the Holy Aioli burger (with grilled onion, melted American cheese, smoked bacon and Dog Haus’ signature garlic aioli) and the Sooo Cali dog (topped with crisp greens, chopped tomato and onion, avocado and basil aioli) so I opted for a sausage. Strictly on the basis of its name, I couldn’t resist the allure of the Abe Froman, a spicy three-pepper kielbasa with the added protein kick of white American cheese and a fried egg and smothered in grilled jalapeño strips and onions. The Sausage King of Chicago would be proud of this sandwich; the egg enhanced the flavor of the meat without overpowering it and the jalapeño gave it a fiery kick with more gusto than Mrs. O’Leary’s cow. 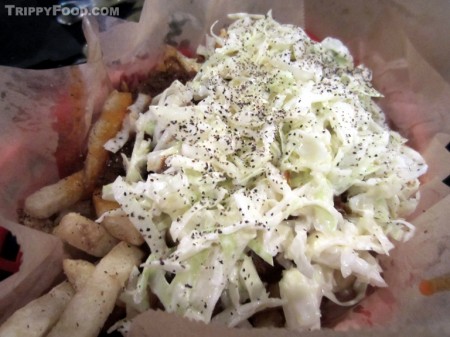 All aboard the Love Boat

Beware of the sides; if you’re expecting a cute little paper cone filled with your pomme frite selection you need to take a few steps back. The “baskets” are literally that – if you’re ordering one of the tater baskets with “add-ons”, I recommend sharing as the portions could serve as a main course for an NFL team. There’s nothing like the homespun comfort of the golden brown, perfectly prepared tater tots, especially when immersed in  chili, cheese and onions – incredibly they maintained their crispness while absorbing the spiciness of the topping. Deep End Diner Eddie Lin opted for The Love Boat (a mound of fries inundated with chili and a white creamy coleslaw) to go with his Double Dog Dare, a twin wiener prepared similar to the Abe Froman sans fried egg and swaddled in grilled Hawaiian bread. The fare at Dog Haus is hearty, substantial and satisfying, and it’s not for lightweights – Adam Richman would be perfectly at home here, most likely taking on the insane protein A-bomb that is the Big Ern McCracken. 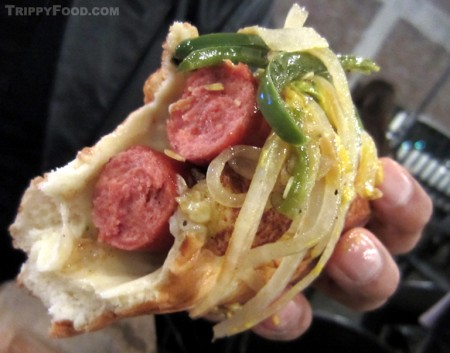 In the case of the Dog Haus Biergarten, more of the same is a warm and welcome pleasure. After the hangover from the grand opening party has faded like the burn from the Abe Froman, Dog Haus will undoubtedly be the go-to location in Old Town for hot dogs, sausage and burgers that are certain to be the talk of L.A. County where the bark is every bit as big as the bite.

5 Responses to Who Let The Dogs Out?