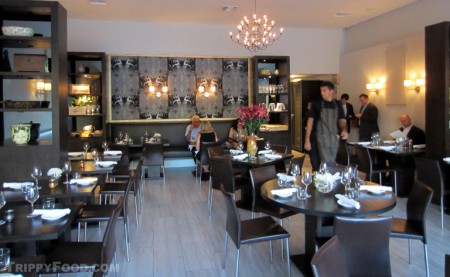 Chef Michael Young has transformed the former Bollywood Cafe in Century City into a modern, formal but friendly classic Italian restaurant featuring the cuisine he perfected cutting his teeth at Il Grano, Valentino, Drago, Piccolo, and Domenico. Ombra Ristorante recently offered a dinner pairing traditional Sicilian and Italian dishes with Vietti wines, in some cases with the wines used in the preparation of the meal. The Vietti label has been part of Italian history for almost a century and their bottles, although vinted in the 21st Century hasten back to the old days; Vietti commissions international artists to create their labels with most creating art that give the bottles a nostalgic feel. 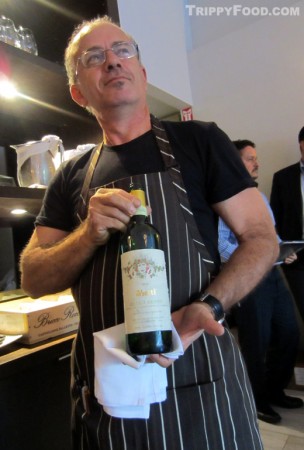 One of our hosts presents the 2010 Vietti Roero Arneis

The meal started with arancini, the Sicilian version of the croquette. The light, golden brown teardrops reminded me of a mellower coxinha with the bulk of the heart using risotto. This was accompanied by a dish of caponata with the eggplant cooked down to where the skin had some teeth to it but the flesh was soft and tender.

The first sturdy dish brought out was the vitello tonnato, cold thin sheets of rare veal covered with a generous dollop of a mayonnaise-like sauce made with pureed tuna and decorated with red onion and capers. The taste of the tuna in condiment didn’t overpower the taste of the veal, although the red onions made their presence known. The veal was paired with a white 2010 Vietti Arneis which was almost clear; I don’t consider myself even close to a connoisseur, but I though the wine was dry enough to not confuse the taste of the dish that already had a number of complex flavors to it.

Handmade Agnolotti al Plin ravioli followed, and although these pasta squares traditionally contain meat, Ombra’s rendition was simply stuffed with ricotta cheese. Most of the flavor came from the Parmesan-infused butter and sage the ravioli was dressed with, defining the taste as upscale cheese pasta. In fact, there was so much cheese flavor that the “Tre Vigne” Barbera D’Asti the dish was paired with served as a wash to prepare the palate for the next dish. 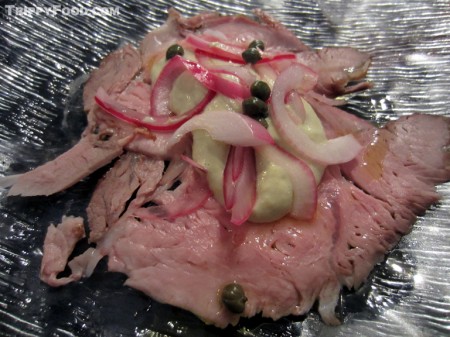 A sheet of rare veal with a tuna sauce (vitello tonnato)

A somewhat soupy risotto al Barolo e radicchio was an odd little dish; the grains were al dente and the rice blob had a maroon tinge to it from the combination of the radicchio and the red wine. Naturally the dish was paired with a Vietti wine, in this case the Perbacco Nebbiolo – I didn’t think to ask if it was the wine used to prepare the dish. The risotto was followed by a manly mound of spezzatino, a stew made from chunks of cubed beef. Ombra sources their beef from Paso Prime Charolaise and Angus hybrids raised on grass on ranches in Paso Robles, Santa Maria and Santa Ynez, and the meat has a strong, distinct beef taste. To make the spezzatino, the meat is braised in red wine (presumably the Castiglione Barolo it was paired with) which created a heady reddish-brown gravy that flavored the bed of mashed potato the stew sat on. The meat was slightly chewy but not to the point where eating it became work. 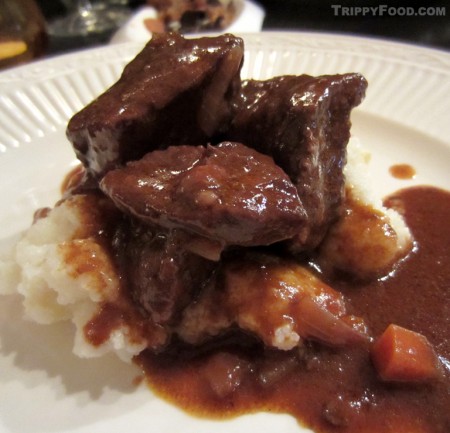 The meal was followed with a sweet panna cotta with the consistency of pudding and heavily flavored with vanilla, also paired with a wine (the Cascinetta Moscato D’Asti). I don’t usually consume mass quantities of wine with a meal, and normally I stick with one bottle, but I enjoyed having sips of the wines that were paired with each of the dishes. The 5-course dinner and wine pairing is a tasty, educational experience for the Italian wine and food novice and a way to sample some wonderful regional dishes with carefully selected accompanying wines for the connoisseur. I came, I saw, I drank…