Sunday In The Park With Gulliver 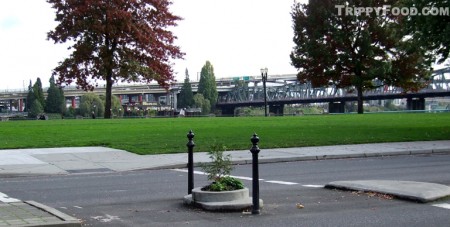 See the greenbelt in the background? That ain't it.

If Occupy Portland had settled on Mill Ends City Park as their base of operations they would have been hard pressed to get Verne Troyer camped out there – the park meanders over a sprawling two foot wide circle in the median area of Portland’s SW Naito Parkway, not far from Portland Saturday Market (compare this to the nearby Forest Park, weighing in at a respectable 5,100 acres). The officially designated city park originated as an off-handed joke by Oregon Journal columnist Dick Fagan on St. Patrick’s Day in 1948; the stone-curbed circle was designed to house a lamppost, but when the hole began sprouting weeds, Fagan planted flowers and claimed that the spot was home to the only leprechaun colony outside of Ireland. Dubbing the park “Mill Ends” after his column in the Journal (which was located across the street from the park), Fagan continued to maintain the park until his death in 1969. The City of Portland legitimized Mill Ends as a city park in 1976. 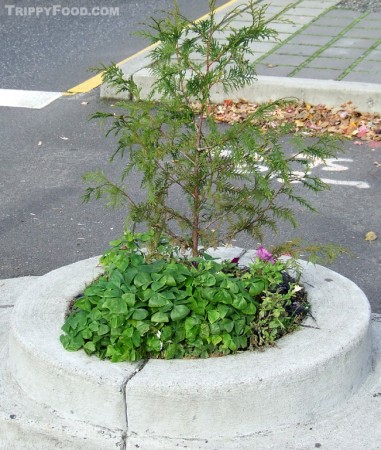 Over the years, tiny park amenities have been added and removed as well as the park’s ever-changing dense vegetation; children and visitors regularly leave toys, trinkets and art work at the park (which is apparently cleaned out on a regular basis in an effort to make Mill Ends less difficult to find). The park is the location of an annual St. Patrick’s Day festival, although don’t look for a performance by Honey I Shrunk The Celtic Band any time soon. Tourists seeking out the legendary diminutive recreation area often walk right past it, mistaking its location for somewhere in the green Governor Tom McCall Waterfront Park that runs between Naito Parkway and the Willamette River.

No need to get an early start, pack a lunch or get day passes; the park is open 24 hours a day, 365 days a year, and although the city has a camping ban in city parks, no ban exists on Mill Ends since sleeping in the park would be impossible (and the city is reluctant to incur a curse by the resident leprechaun population). The park was closed temporarily for about a year in 2006 while construction took place on Naito Parkway, at which time it was relocated to just outside the World Trade Center on the adjacent corner. Despite being recognized by Guinness Book of World Records in 1971 as the world’s smallest park, the distinction appears to be lost on Portlanders – on my visit to the park, cars on both sides of the street whizzed past without slowing down to figure out what it was I was documenting (after all, the general rule for visiting America’s open areas is “take nothing but pictures, leave nothing but footprint”, the latter of which I thought was best bypassed completely as a single footprint would have destroyed the park). 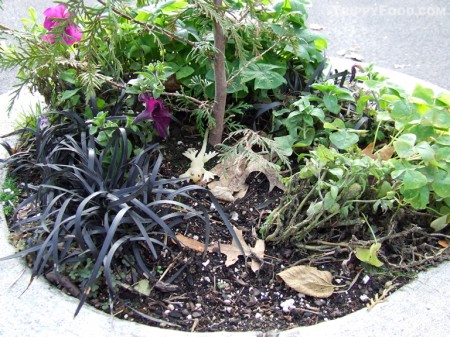 Either someone left a toy lizard or it's now Jurassic Park

Portland, Oregon is a quirky little city that has a vast array of things to see, do and eat, but a trip to Stumptown without a visit to the world’s smallest park would be missing the spirit of what the signs all over town urge – Keep Portland Weird. There’s no excuse not to check out Mill Ends City Park; it’s a small world, after all.

2 Responses to Sunday In The Park With Gulliver