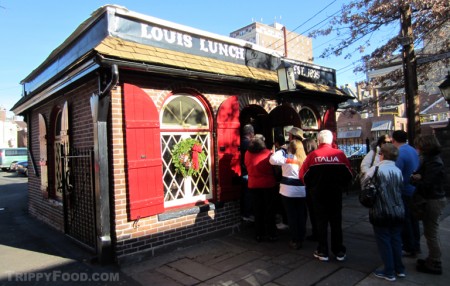 Same building for almost 100 years relocated to this spot

Burger aficionados are constantly looking for the ultimate gourmet burger or the best fast food beef patty available – from the diminutive, oniony square bites from White Castle or Krystal, to the face-off for the meat puck between Southern California’s In-N-Out and Virginia’s Five Guys, up through the do-it-yourself The Counter. Restaurants have escalated the lowly ground beef disc to haute cuisine, blending exotic animals and topping the burger with a dizzying array of vegetable, animal and mineral substances on baked goods from flatbread to Hawaiian sweet rolls. In order to find the ultimate burger, simply prepared in the same manner as it was at its conception, one need only look to the birthplace of the burger in New Haven, Connecticut – Louis’ Lunch. 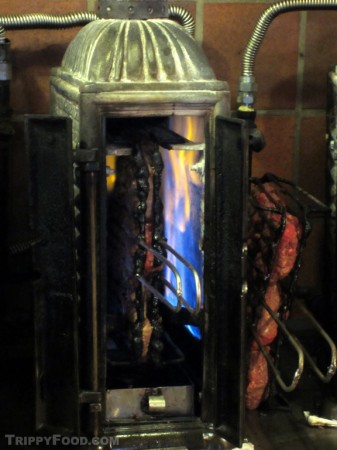 Vertical broiling of the burgers to medium

The building (a single-story brick cube smaller than some condominium dining rooms set back off the sidewalk on Crown Street) is easy to miss. The structure housed a tannery when it was purchased by founder Louis Lassen around 1917 to replace his “meat wagon” serving steak sandwiches; when urban development threatened the site in 1975, the building was moved brick-by-brick to its current location. The tell-tale sign that you’ve found it is the line that snakes out the door with a wait at times of over an hour. There is limited seating inside, including a large round table, a small square table, and antique wooden furniture including individual booths that would look at home in an old cathedral, although there is some counter space for those who wish to stand while eating the burger. 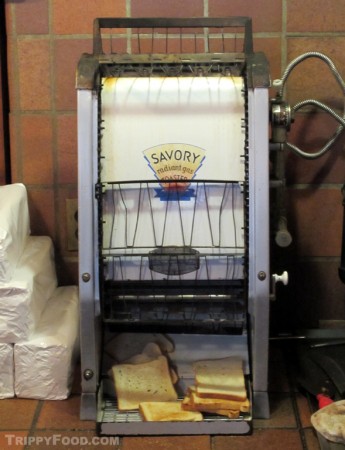 1929 Savory Radiant Gas Toaster, source for what holds the burger

Simplicity is the key – the menu only contains four items – the burger itself, sides of potato salad or bags of chips (there isn’t a French fry to be found, so don’t ask) and freshly baked pies for desert. Most of the variety comes from the available pie wedges or the ample selection of soft drinks – the burger is prepared the same way as it was when Louis Lassen allegedly threw one together for a hurried patron back in 1900, a birth date that is not in dispute or even closely challenged. As a sign on one of the far walls reminds diners, this is not Burger King, and you cannot get it your way – all burgers are cooked medium and requests for different cooking times will take longer since the patties are cooked on racks together. A lean blend of different meats so secret even WikiLeaks doesn’t have access to the recipe is hand-formed to patties in plain sight; these are sandwiched in a wire racked that is inserted vertically into one of three antique cast iron gas stoves that look like the triplet sons of W. W. Denslow’s tin man; how the burger is able to emerge from the blue flames moist and juicy is beyond me. 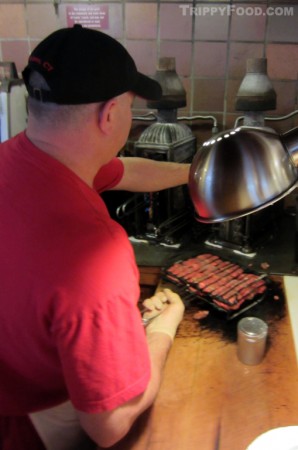 Preparing a batch of burgers

The rack is opened and each burger is lightly seasoned and placed on toast that comes off the 1929 Savory Radiant Gas Toaster, a contraption that looks like a torture chamber for bread slices on a chain conveyor belt. Don’t even think about asking for a wheat bun or Kaiser roll – all the white bread comes out of unlabeled sliced loaves lovingly wrapped in nondescript white plastic. There are three options for your burger besides the light salt and pepper dusting applied to the cooked patty – a putty knife’s worth of soft cheddar, thin slices of yellow onion or sliced tomato – that’s it. A sign above the cooking area proudly displays a catsup bottle nested inside a red Ghostbuster circle and diagonal bar indicating that you’re on your own when it comes to condiments – you won’t find a catsup packet in the entire place unless it was surreptitiously smuggled in. The chef has his assembly line down to a science – the optional cheese is spackled across the bottom slice of toast and capped with the burger, whose heat melts the cheese to a Cheez Whiz consistency. When requested, halved tomatoes are sliced face down, as are the onions (sometimes in cross sections so thin they disintegrate atop the burger and hang over it like thin white spider legs) and the sandwich is capped with the top slice of toast. The sandwich is cut in half and either wrapped in paper to go or placed on a small paper plate for dining in. 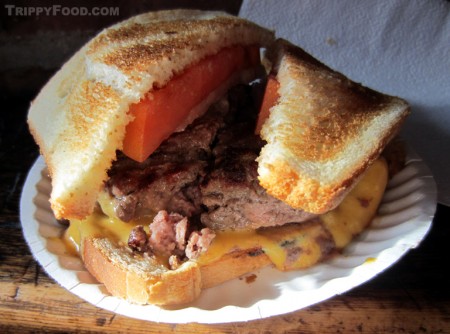 The burger with everything available on it

As limiting as the burger options appear to be, this is a blessing in disguise; the sandwich comes out hot, with the juicy meat crumbling between the slices of toast, a dribble of cheesy lava spilling out from beneath. The thinly-sliced onion gives some flavor to the meat without overpowering it, and the tomato is a good substitute if you miss the abomination that is bottled catsup; be sure to grab a small stack of napkins as this bad boy is messier than Oscar Madison. You may want to opt for yours naked, with nothing but the burger between the two slices of toast – trust me, the burger is outstanding, with each meaty bite exploding in hot broth, better than any you’ll stand in line for anywhere. 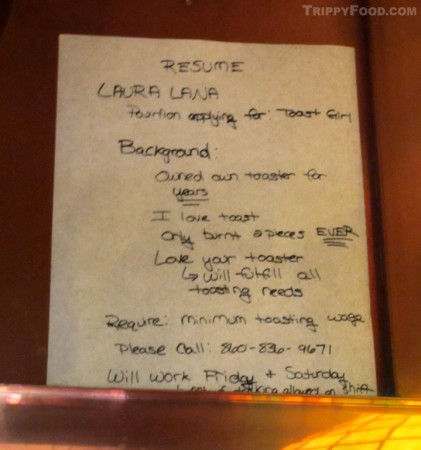 Hand-written resume of someone applying for “toast girl”

Louis’ Lunch has the distinction of being the inventor of the hamburger as a sandwich as well as being the oldest burger joint in the U.S. (still under ownership and operation by the Lassen family). Its New Haven location makes it a mandatory stop when traveling from New England through the Atlantic states or you can wait until you join Skull and Bones and get sent out for a bag of burgers.