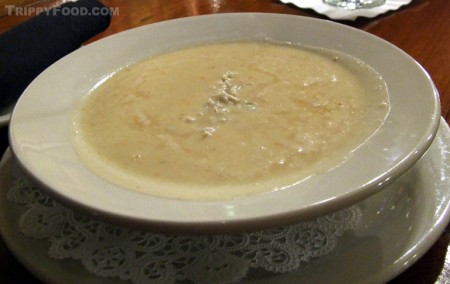 Charleston, South Carolina and its environs is a cultural microcosm, home to the historic culinary phenomenon known as lowcountry cuisine. This genre includes many dishes that are influenced by African and Caribbean cooking, often using ingredients otherwise considered inedible or scraps. Dishes such as shrimp and grits have found their way on to high-end menus across the country, but one in particular that appears to have stayed somewhat regional is she-crab soup. Just the connotation of the dish’s name indicates that the prime ingredient is female crabs – in this particular case, the male just won’t do. 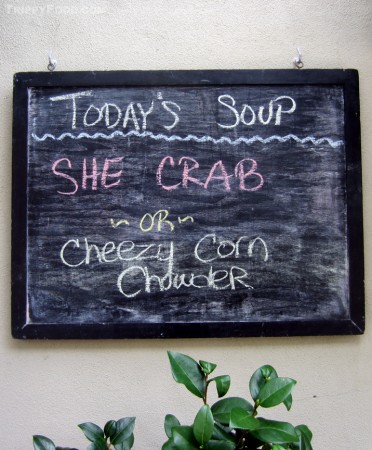 Naturally, the crab of choice for this rich, creamy delicacy is the Atlantic/Chesapeake/Maryland blue crab (Callinectes sapidus), a species well known from its appearance in crab cakes, as the bizarre soft-shelled crab that gets eaten fried and sandwiched (spidery legs and all), and from the spicy boiled preparation that gets heaped on brown butcher paper and consumed in dives and restaurants in the Baltimore area. Once educated, one can easily identify the sex of the crab; the key reason the womenfolk are used is because the ones that are selected are generally “in a family way”. In addition to mommy crab playing a starring role in the bowl, her unborn children get to participate as well – the roe (eggs) of the crab are what contribute to the soup’s unique flavor. 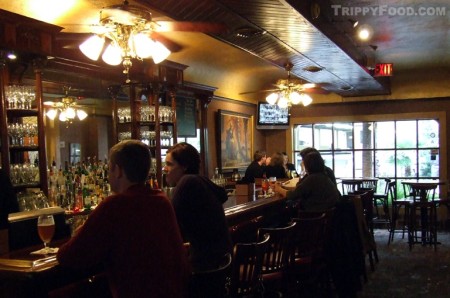 Charleston’s favorite spot for partaking of this soup is 82 Queen, who since 1982 has been ladling out cups and bowls of the chowdery brew to rave reviews. The name 82 Queen is derived not from their date of opening but from their historic address; the three buildings that comprise the restaurant can trace their roots back to the late 1600s, having endured restorations due to hurricanes, fires and even an earthquake. I don’t use the term “favorite” lightly – 82 Queen’s she-crab soup has been voted as Charleston’s Best no fewer than 7 times by reader polls by the Charleston City Paper, a badge of honor that 82 Queen displays proudly. You would think that there would be a great deal of secrecy involved in maintaining the coveted title, but 82 Queen is so secure in being voted the best that they actually post the recipe for the award-winning soup on their web site (an excerpt from the book of recipes they sell on their web site and at the restaurant). Of course the publicity also helps since diners at the restaurant can purchase a kit with the ingredients (sans crab) to create their own soup. 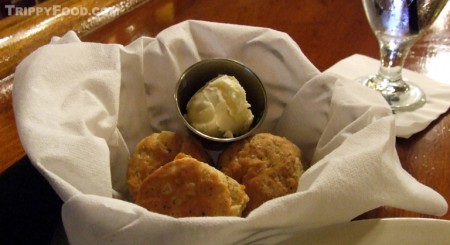 If you’re going just for the soup, I recommend bellying up to the wooden bar where your beertender is more than happy to discuss the taste adventure you are about to embark on. A cup of the bubbly elixir will set you back about six bucks; why not kick in a buck more and get a bowl? The soup arrives with an optional cruet of sherry – go easy on the self-dispensation as the sherry adds, but can also take away flavor; a little goes a long way. She’s also accompanied by crumbly biscuits infused with spices and cheese; you’ll want to retain at least one of these tasty morsels for sopping up the dregs of soup in your bowl. 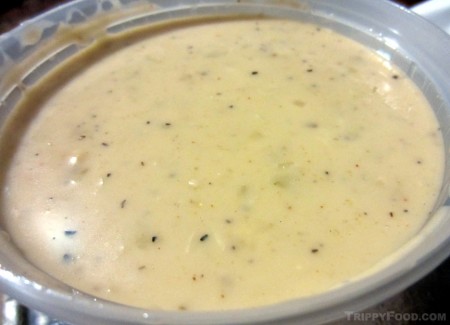 And what of the soup itself? Not having had it in any of 82 Queens competing restaurants, I can’t comment on whether it’s the best, but I can attest to it being pretty frickin’ delicious. Thick and creamy, each spoonful coats the tongue with an evenly-spiced blanket of warmth. As it lingers, the flavors emerge – the familiar sweet taste of the blue crab along with the slightly salty, oceanic essence of the roe. I will always remain faithful to my childhood sweetheart (New England clam chowder), but this hot mama can expect a visit from me whenever I’m in Charleston.