The Ukraine Girls Really Knock Me Out 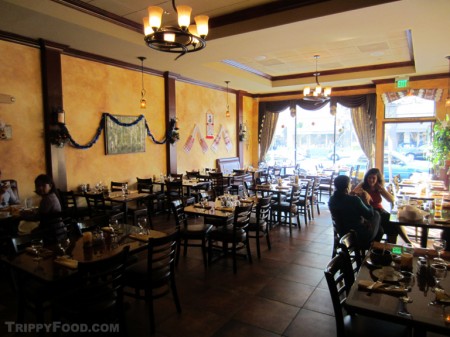 Historically Roxelana was a woman of Ukrainian ancestry who rose from status as a harem slave to Sultan Suleiman I (one of the most powerful sultans of the Ottoman Empire) to becoming his wife and the sultana. By the time of her death (eight years before that of the sultan), she had become the most influential woman in the history of the Ottoman Empire, if not the world. To introduce the Southern Californian palate to the cuisine of the region takes strength and motivation, so it is befitting that Executive Chef and owner Igor Zagorodnyy and his son-in-law Alex Balinsky have chosen to christen their young restaurant after the great sultana. Ukrainian native Zagorodnyy wisely chose Old Town Pasadena for the location of the restaurant since the district is a melting pot of different cultures including Tibetan, Thai, Vietnamese, Argentinian, Spanish and Brazilian in an area easily navigable by foot. 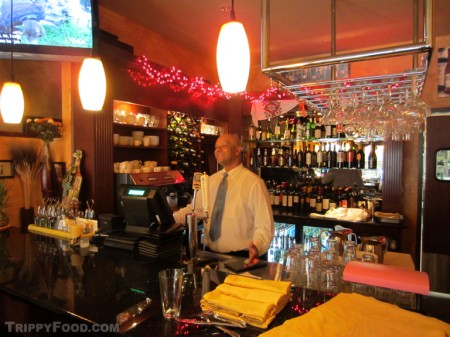 Our waiter Caesar’s smile appears to be permanent

The space is airy and full of light; the brown mottled walls complement the dark wooden columns and furniture as well as tile floor and there’s plenty of elbow room throughout – the decor easily suggests a high-end Spanish or Latin American eatery.  The library-style bar at the end of the room is well stocked with imported Ukrainian beers and the wide-open space lets the staff use it as a command center. On my visit there appeared to be one member of the service staff on duty but the light mid-afternoon crowd afforded Caesar to attend to the needs of all the patrons, including being available to answer my constant annoying barrage of questions. 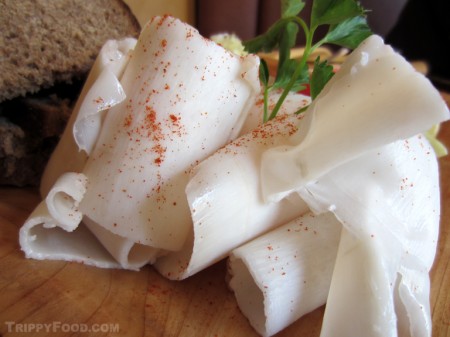 The menu leans heavily on Zagorodnyy’s regional favorites, but doesn’t limit itself to only the cuisine of Kiev, his home (naturally you’ll find chicken Kiev of on the menu). Since Roxolana is touted as a Ukrainian restaurant, we tried to adhere to as close to traditional dishes as possible. For starters we opted for the salo, a dish that should probably come with a cardiologist’s warning label. Salo is unrendered pork fat (similar to lardo) that can be brined or cured with a variety of spices (predominately paprika). The curled shavings of unctuous hog fat arrived at the table with pickles (tomatoes, garlic and sauerkraut), fresh red onion and dark rye bread, unceremoniously presented as our “lard”. A light-handed flick of the wrist with a butter knife was all took to adhere the pure white paprika-dusted slices onto the rye. As expected, the salo melted like a fine, loose brie and the taste was literally like pig butter. Crowning the salo with various pickles took too much away from the taste, so they were for the most part eaten separately. 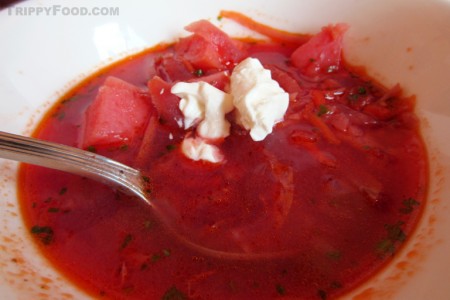 Roxolana’s borsch was not what I had expected; rather than the cold variety, the soup was served hot with enough of a tomato base to offset the earthy taste of the root vegetables and to make the color redder than usual. Big cubes of firm potato easily gave way to the teeth and although they had absorbed the crimson broth they maintained their taste. Per tradition, the soup was served with sour cream on the side and a couple of firm, crusty pampushkas that sopped up the dregs left at the bottom of the bowl. 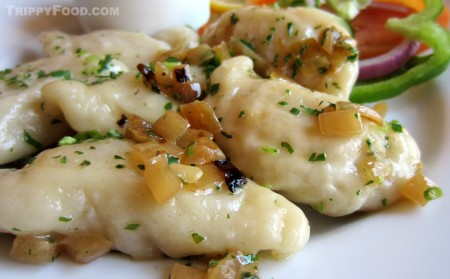 The vareniki dumplings were hot and moist and the thick dough was cooked al dente. The menu offers a variety of fillings, but we deferred to Caesar for a traditional filling which turned out to be potato and mushroom. The fungi was diced so small as to be almost unrecognizable, although it certainly offered flavor to the dumpling, as did the sautéed onion sprinkled on top. The filling was straight out of the mashed potato handbook, although a little moister, giving the dumpling the flavor of gnocchi. 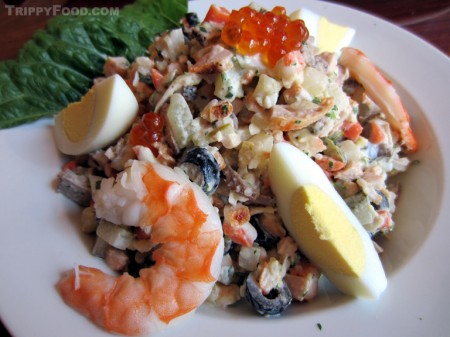 The busy but tasty Olivier 1904 salad

The salad options leaned more towards the international; the Cesar salad would have been better suited to our waiter Caesar’s Sonoran heritage, and the thought of ordering a Greek salad never crossed our minds. The most suitable option was the Olivier 1904, named for its inventor, Chef Lucien Olivier of Moscow’s Hermitage restaurant. The term Olivier salad (also commonly called Russian salad) was given the “1904” surname because it is a loose tribute to a recipe published in 1904. Roxolana’s version keeps true to what is essentially a pedigreed egg or potato salad; chopped potato, hard-boiled egg, beef and chicken roll around in a mayonnaise base, accented by diced black olives and pickles with shredded carrot. The dish is crowned with a dollop of salmon caviar (which also hides inside the salad) and accessorized with cooked shrimp. As high-society as this salad purports to be, it would be perfectly at home served at a picnic or cookout; the flavors didn’t step on each other’s toes (unless you got a bite laden with pickles and olives) and the mayonnaise wasn’t present enough to be off-putting. 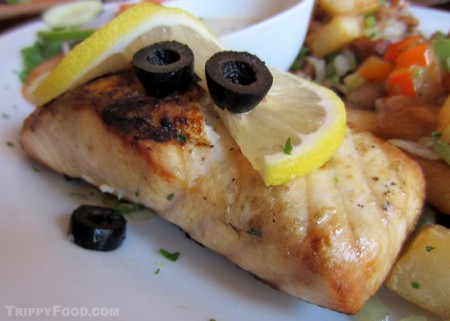 The main event was the grilled sturgeon. To dine in a Ukrainian restaurant without indulging the Black Sea denizen responsible for the high-dollar caviar we’ve come to love would be unthinkable. The thick slab of fish flesh had a delightful char on it that had more flavor than the flaky, white meat within. Although similar in flavor to a mild whitefish, the size made it slightly dry; a drizzle of the accompanying sauce of garlic, chardonnay and tiny white caviar was all it took to restore the moisture end enhance the flavor. Because the sturgeon is imported from the Ukraine, it is not always available on the menu and is undoubtedly the highest priced item on the menu (at around $30).

There are no complaints about the service at Roxolana; the staff answered our myriad of questions and did so with a smile. The food was an Eastern European adventure, full of flavor and history and the atmosphere and location make this a must-visit culinary destination; I’ll be Russian down to Roxolana again very soon.