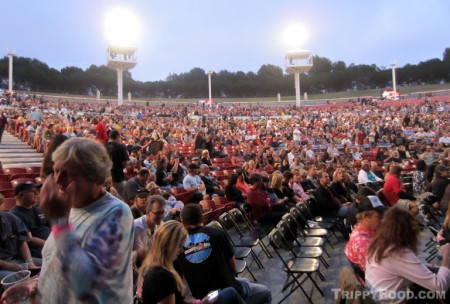 Pacific Amphitheatre fills up for the BÖC/Kansas show

Some artists’ names will echo through the ages, not as a result of their longevity, body of work or talent, but because they were referenced in some other medium where the mention became a cultural phenomenon; nowhere is this more apparent than the infamous “more cowbell” VH-1 Blue Öyster Cult: Behind the Music skit on Saturday Night live and Ted Logan’s (Keanu Reeves) “Dust in the Wind” stab at philosophy in Bill and Ted’s Excellent Adventure. Fortunately for both BÖC and Kansas, their legacy is built on the aforementioned characteristics as well, evidenced by resurgence in popularity including a new, younger audience. The likelihood of all but a few 70s metal gods and prog bands filling Wembley is slim at best, but both bands regularly frequent the last bastion of classic rock venues – the county fair. 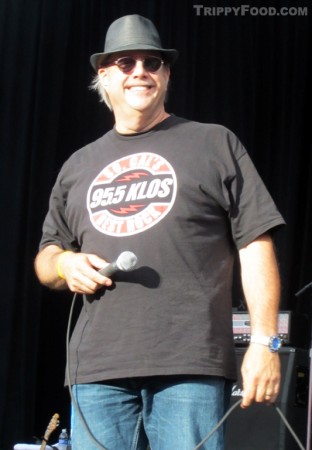 BÖC and Kansas recently performed on a double bill at this year’s Orange County Fair at the Pacific Amphitheater, an ideal venue to catch those bands you thought sailed off to the point of no return; the bowl is designed specific for live music (as opposed to those teetering scaffolded stages that have a nasty habit of collapsing in high wind). Then there’s the added benefit of admission to the OC Fair with the purchase of your ticket, which quite frankly will not set you back anywhere near catching Pink Floyd in the nosebleed seats.

On a personal note, I am not embarrassed to admit that I had seen BÖC shortly after their 1976 release, Agents of Fortune, but was looking forward to hearing how almost 35 years had changed their sound. This was around the same time Kansas had released their third album, Leftoverture which contained their first Top 40 hit, “Carry On Wayward Son” and I was making up for lost time, never having seen the band previously. Local rock historian and “Off the Record” host “Uncle” Joe Benson from KLOS came out to rally the troops (with an approximate 50 year range in age) several times before BÖC hit the stage. The air was filled with excitement and the faint aroma of cannabis as the sound of Christopher Walken’s voice was piped through the speakers, exclaiming, “I got a fever, and the only prescription is more cowbell!”, probably the only other reference to the SNL skit the entire night and BÖC blasted into the grungy tribute to the RCMP, “The Red and The Black” sounding like an edgy Ted Nugent in his glory days. The set leapt forward into the MTV-era “Burning For You” and into the almost-pizzicato death march, “Black Blade” before the band relaxed and stretched out with an extended version of their underrated freshman single, “Then Came the Last Days in May”. The song showcased band founder Donald “Buck Dharma” Roeser’s weepy blues guitar skills and the fact that the song was based on a story about friends of Roeser’s who were ambushed in a drug deal gone wrong was not lost on the audience (most of whom were likely encountering a contact high). 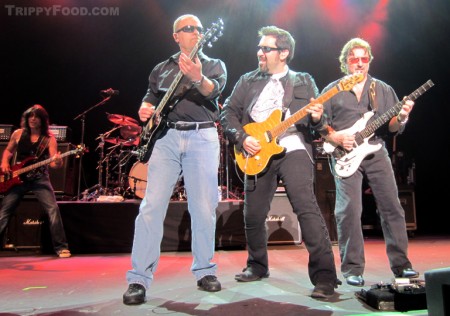 When the band launched into “Cities on Flame with Rock and Roll” (a song that gained popularity after appearing on BÖC’s live album, On Your Feet Or On Your Knees) it seemed to plod on lifelessly; other longtime member and guitarist Eric Bloom’s Brooklynesque lead vocals weren’t much of an improvement over departed member Allen Lanier’s and the band sunk into the depths of self-indulgence with their 1977 sing-along, “Godzilla”. Guest bassist and metal legend Rudy Sarzo took center stage in the middle of the song when the audience had to endure Bloom introducing each band Sarzo had played in while Sarzo copped the bass riffs from such songs as “Crazy Train”, “Cum on Feel the Noize”, “Here I Go Again”, et al and then careened into the biggest bass noodling fest since Derek Small’s “Jazz Odyssey” – the only bearable parts were low-end versions of “Cliffs of Dover” and “Birdland”. Unfortunately the audience was also treated to the obligatory drum solo (which admittedly newest member Jules Radino handled skillfully) before returning to “Godzilla”. 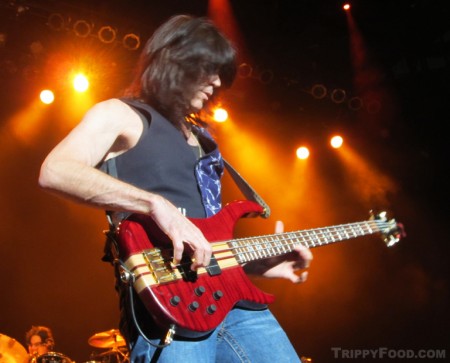 Metal bassist Rudy Sarzo held down the bottom for BÖC

BÖC was able to salvage their dignity with a tight and powerful rendition of their now-legendary highest charting single, “(Don’t Fear) The Reaper”; the only SNL references were Randino’s highly amplified cowbell and an air cowbell performance by Eric Bloom. Third guitarist and keyboard player Richie Castellano wasn’t showcased during the set, but he was invaluable in filling out the sound of the band. Maybe it was my own pre-concert partying back in 1976 that made it difficult to tell if the band had grown musically, but there was no doubt that BÖC came across as powerful and skillful musicians, forgiving the over-indulgent “Godzilla”. 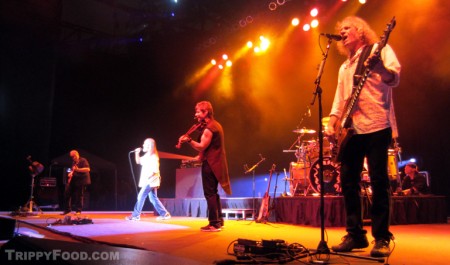 The atmosphere was different when Kansas took the stage – their cerebral prog-tinged set was more attuned to rapt listening than screaming with fists thrust high in the air. I was relieved to see original members keyboardist/lead vocalist Steve Walsh, guitarist Rich Williams and drummer Phil Ehard along with erstwhile front man, bassist and long-time member Billy Greer augmented by recent addition Dave Ragsdale on violin and second guitar as the band built the crescendo that in title and form was “Magnum Opus” from 1976’s Leftoverture. The complex syncopation and erratic structure was a throwback to the heydays of the progressive rock genre and Kansas executed the symphonic piece flawlessly. The Kerry Livgren composition, “Belexes” (from their debut album) sounded more akin to something that might have a B-side to a Joe Lynn Turner-era Rainbow single, but it allowed the band (and the audience) to rock out, if only briefly. 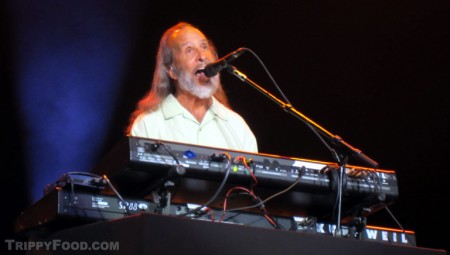 Kansas returned to their second charting prog-pop single, “Point of No Return” with its familiar strings and keyboard punctuation driving the blistering and near impossible vocal high notes. Walsh’s voice showed the waver of age, but he was still able to belt out the glass-breaking notes in the song’s bridge with seemingly little effort. From behind the keyboards, the gray long-haired and bearded Walsh he looked like he was going to require assistance getting around but he proved to be surprisingly spry and agile when occasionally descending the riser to sing front-and-center like a hopped-up Gandalf. 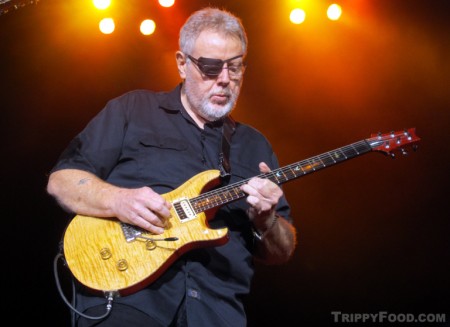 The band eased the pace a bit with “Hold On”, the stand-out track from the 1980 album Audio-Visions which saw the last of the original lineup. The song is probably the closest Kansas has to a rock anthem and one of their more accessible tunes, and it appeared that the audience concurred. While still on familiar ground, Williams switched to acoustic guitar for what has become the band’s signature tune and highest charting single, the immortal ballad, “Dust in the Wind”. The problem with live ballads, especially ones as ingrained in rock culture as “Dust in the Wind” is that the audience has a tendency to sing along; fortunately they didn’t overpower Walsh’s delivery and he didn’t succumb to the lazy practice of pointing the microphone into the audience to let them sing a chorus or two. 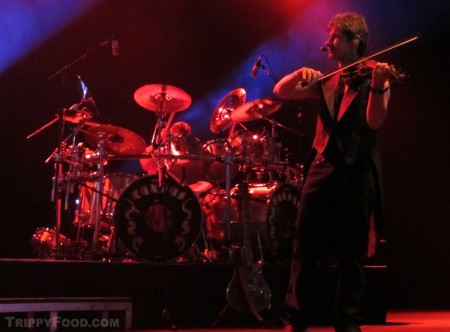 Greer talked to the audience a bit afterwards, clearly demonstrating that he was the band’s front man, if only as their acting mouth piece; it was strange that as lead vocalist and founding member that those duties were not the responsibility of Walsh. The band came out of the break with two dramatic pieces from Leftoverture that featured Walsh’s soaring operatic vocals (“The Wall” and a brilliant “Miracles Out Of Nowhere”, the latter with nicely blended 3-man harmonies) before going backwards into “Icarus – Borne on Wings of Steel” of 1975’s Masque. “Portrait (He Knew)” was originally said to be written as a tribute to Albert Einstein, although in a later Livgren re-write it becomes obvious that it refers to Jesus – if the audience was put off by this, it wasn’t apparent from the Greer-instigated hand claps that paced the song, an odd augmentation for such an ambitious composition. 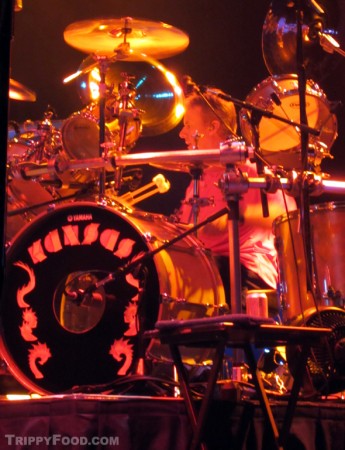 Walsh easily copped, if not bested the vocal style of John Elefante (who had been the lead vocalist on 1983’s Drastic Measures) on the mainstream rock single “Fight Fire with Fire”, most likely the most straight-ahead number of the night, which was dedicated to the military. When the band belted out the first strains of “Carry On Wayward Son”, it was all over but the shouting, except it was a tall, gaunt bearded and graying man who brought the house down, not a fat lady. Naturally, the crowd went crazy during the letter-perfect rendition of the prog rock favorite, and Walsh still delivered on the piercing vocals.

With bands like Hall and Oates and The Doobie Brothers hitting the county fair circuit it’s a great opportunity to get up close and personal with legends of classic rock, especially in the confines of the Pacific Amphitheater. The sound is great from any seat, although personally I could have used a little more cowbell.

NOTE: This cost for this event was provided by the venue. The content provided in this article was not influenced whatsoever by the organizer of the event.