We Dine Well Here In Clamalot 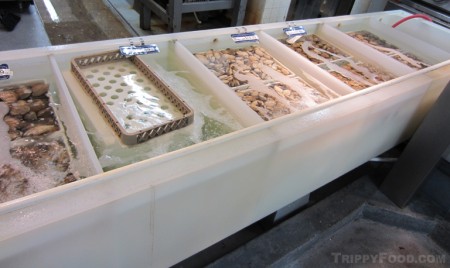 The clam tanks at Quality Seafood

There are a wide variety of clams found around the globe and on dinner plates worldwide; these include razor clams, Manila clams, giant clams, the bizarre and phallic geoduck and Pismo clams to name but a few. Nowhere on this planet are clams elevated to s higher cultural status than in New England, where the soft-shelled clam (Mya arenaria) and the hard clam, or quahog (Mercenaria mercenaria) are the basis for several dishes that virtually every New Englander has tried or knows by name. Clamming or clam digging is big business along the northwestern Atlantic shores, and where clams are not hand-dug, they are cultivated for mass markets. It’s not uncommon to find beachcombers out with wooden-pegged rakes at low tide sifting through the sand and muck for these sweet bivalves. 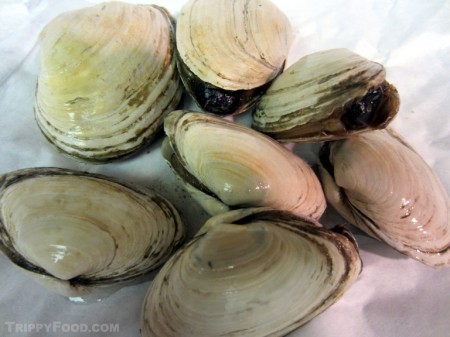 A bunch of soft-shelled clams for steaming

One of New England’s prized favorites is the soft-shelled clam. This is the mollusk you’ll get at your  neighborhood fish market when you ask for steamers, although it is also the clam most commonly used for fried clams. Locally the soft-shelled clam is also referred to as the piss clam because of its habit of sending up a stream of water when the sand it is buried in is stepped upon, which gives away its hiding place and puts it on the evening menu. The clam burrows backside-first (the end the “neck” doesn’t stick out of) into the sand and then extends its siphon to the water. Before preparing soft-shelled clams that have been recently extracted from their sandy homes it is best to keep them in saltwater for a few days so that they expel the sand inside them, although if you don’t have a tank with a filtration system that keeps the water moving, the clams may die, making them inedible (always discard clams that don’t react when you touch the end of the neck, a practice that works well on certain people as well). A reputable seafood market will keep them alive in tanks so that you won’t need to go through this process, and although they won’t fry them for you, some will steam them for you on the premises. 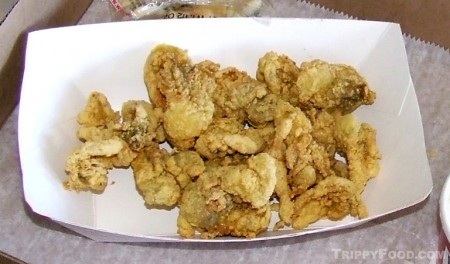 Of the different preparation methods, the richest and most decadent has to be fried. At clam shacks up and down the coast, these golden morsels of sweet delight are heaped up in paper cartons, generally to be eaten outdoors while taking in the salt air (although you if you don’t care to fight of the coastal garbage men known as seagulls, you may want to find a place away from Bodega Bay where you can dine safely). Legendary purveyors of these cholesterol-laden treats include The Clam Shack in Kennebunkport, Maine;  The Clam Box at Wollaston Beach in Quincy, Massachusetts (not to be confused with Ipswich’s famous Clam Box, which is actually shaped like a carton of fried clams); and Kelly’s Roast Beef in Revere, Massachusetts (that’s right, Kelly’s Roast Beef) et al, but if you want to enjoy fried clams at the location where they were allegedly invented, a road trip to Essex, Massachusetts for a stop at Woodman’s of Essex is in order. 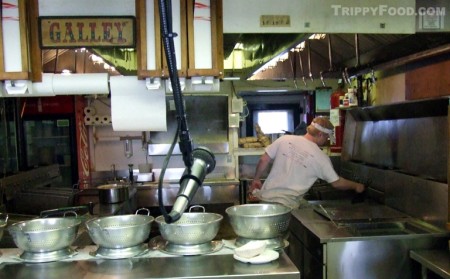 The odds are pretty good that Lawrence Woodman wasn’t the first to fry up clams when he served them to Independence Day parade-goers from his stand in 1916; old menus from some Boston restaurants listed fried clams and other shellfish. What is certain is as far back as anyone can remember, Woodman’s have been the fried clams to beat, made the same way “Chubby” Woodman did almost 100 years ago and often imitated, seldom copied. Today’s Woodman’s is a big, gray wooden structure with typical nautical decor and hand-painted signs and menus. The benches and tables look as old as Chubby and there’s no table service, but keep in mind that you’re not here for the ambience – you’re here for the legendary fried clams, prepared a short walk from where Woodman dug up the clams himself. The clams are dipped, and then dragged through a flour mixture and dunked into the Frialator where they develop a slightly-crunchy crust that seals in the moisture of the clam – the counter where the clams are fried is open so that you can watch them cook while you drool all over yourself. As with any clam shack worth their salt, the whole clam is used, including the “belly” (literally, the clams guts) – as disgusting as this sounds, leaving the bellies intact adds a degree of flavor that is immeasurable – soft, squishy and slightly pasty, a veritable sea foie gras. 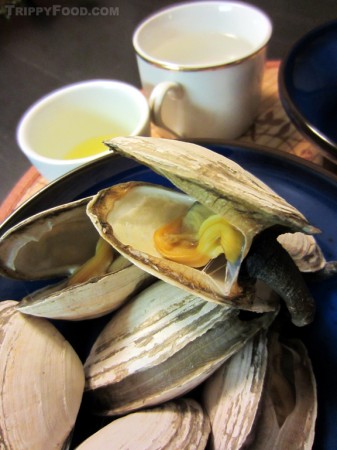 If you don’t want the flavor masked by battering and frying, there are few dishes as raw, satisfying and slightly erotic as steamers. Steaming the soft-shelled clams is ridiculously simple, although some people make the mistake of boiling them (which continues to cook the clams while they are submerged, often resulting in a chewier mollusk). At home, a simple steaming basket that separates the clams from the water is all it takes – once the water boils, put in the clams and cover, and as soon as the shells open, they’re done. The process is the same at a clam bake (an incredible New England summer ritual that generally takes place right on the beach), except that the clams are steamed between layers of seaweed that also contains lobster and other shellfish. Once done, the meat is pulled easily from the shell; a pinch at the base of the neck frees the inedible skin covering the “neck”, which is then peeled off like a used prophylactic (how’s that for a visual?). To get any residual sand off the clams, they should be dipped in the broth created from steaming the clams for flavor, and then (if desired) dunked in melted butter. The taste is incomparable – sweet and slightly earthy, with a contrast in textures from the chewy neck and the soft belly. 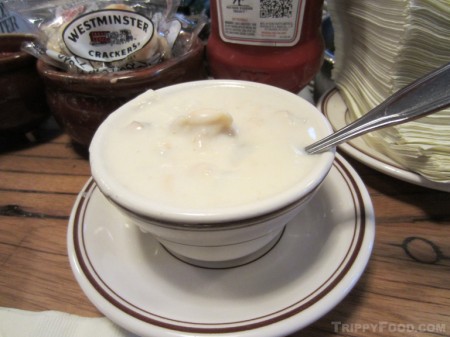 If clam bellies creep you out, there’s always clam strips; these are generally made from the meatier hard clam. The clam navigates the sea floor using its large “foot”, similar to single-shelled mollusks such as snails, resulting in a more muscular animal. Clam strips are cut from the foot of these animals and then battered and fried.  This method was perfected by Thomas Soffron who sold them to then up-and-coming roadside chain, Howard Johnson’s who made them famous throughout America. 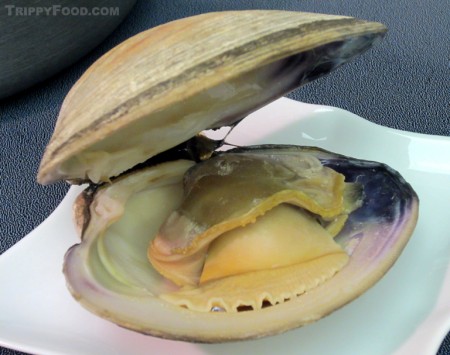 Both or either the hard clams and/or soft-shelled clams are used for clam chowder; New England clam chowder (the familiar thick, white soup) is the most popular although there are other types including Manhattan clam chowder (with a red, tomato-based broth) and Rhode Island clam chowder, which, with its clear broth is more like a clam soup. Almost all of these contain chopped clams, potatoes and onion, and even though the New England variety is made with milk or cream, it is frequently thickened with flour or corn starch. Personally, I prefer the taste without the thickener (which adds flavor as well as viscosity), but many New Englanders see this as the standard. 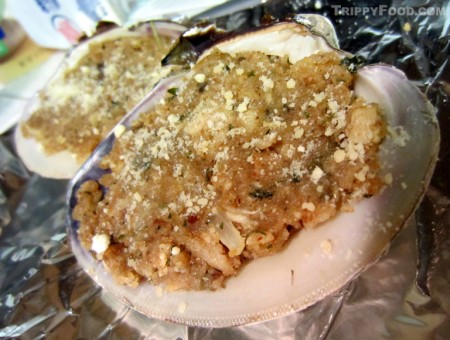 The best way to enjoy the quahog is in baked stuffed clams (which some people claim is referred to by New Englanders as “stuffies”, which although possibly true is likely used about as little as “Beantown” is for Boston). Stuffed clams are considerably more work than steamers; the nearly impenetrable shell is best opened for use in the dish by immersing the clam in boiling water until the shell opens, and then immediately removed. With the quahog, if it is open and doesn’t clam up when picked up then it’s dead and should be discarded. When the meat is extracted, the shell should be retained since the clam is going to be reintroduced to its former home prior to being baked. There are different recipes for preparing the firm, rich and substantial dish, with most including a moist mixture of chopped clam meat, breadcrumbs, butter and spices; it is very similar in preparation to making stuffed mushrooms.

Enjoying clams as New Englanders do is relatively simple, yet most restaurants around the country can’t get it right. Although it’s not done that way in the northeast, clam chowder in a sourdough bread bowl as served in many San Francisco establishments is a nice way to enjoy the bread, and some of the chowders aren’t bad, but sadly a large number of restaurants substitute different types of clams or add ingredients no New Englander would introduce to these dishes. If you can’t find an authentic version in your neighborhood bistro, consider a visit to a full service seafood market (such as Quality Seafood in Redondo Beach, California) and making these Northeastern favorites at home. I guarantee that with these warm regional dishes inside you, you’ll be happy as a… lark.

GALLERY: See images of clams Val has had the pleasure to make or eat

2 Responses to We Dine Well Here In Clamalot