God Save The Spleen 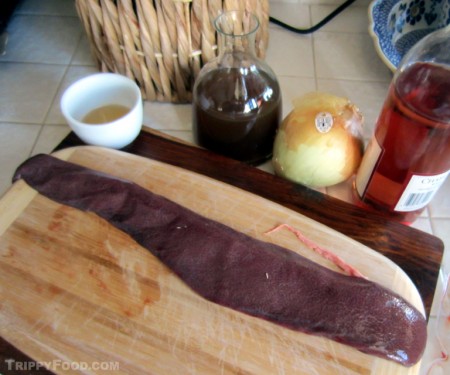 In health as well as in gastronomic circles, the spleen is underappreciated and underutilized, often overlooked because no one is really sure what it does. The dark red organ gets its color from being the body’s blood recycling center; in addition to removing old red blood cells, it also acts as a reservoir for fresh blood. The spleen is one of the hardest working organs in show business (although it spends most of its time backstage while the heart, lungs and brains get all the press); in addition to being blood central, the spleen also ramps up the body’s immune system.

From a culinary standpoint, it doesn’t find its way on many menus, even in hardcore gastropubs where the nose-to-tail philosophy is executed with a vengeance. The closest cute nickname that attempts to make the organ sound more appetizing is “melt”; this probably hasn’t caught on since ordering little Billy a melt sandwich will require several years of expensive therapy when what he thought was a grilled cheese comes to the table with a generous mound of sliced spleen lovingly enveloped between crusty slices of artisan bread. This shouldn’t be a shock for someone ordering sweetbreads, fully expecting that the waiter will not be bringing out the pan dulce. For most offal aficionados, beef spleen is the most frequently used. Nutritionally, as you would expect from the body’s blood bank, the spleen is high in iron, packed with protein and low in fat, although like its cousin the liver it is high in cholesterol. Sadly, the spleen finds its way into more pet food than onto the dinner table. 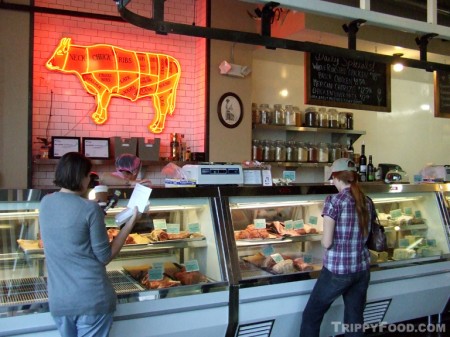 Following L.A.’s favorite butchers (Lindy and Grundy) on Twitter provides the Twitterverse with the day’s animal flesh roll call; one recent tweet advertised that they had spleen available, and not being one to pass up an animal part I’ve yet to try, I decided to procure said organ for another of my “if you can’t find it in a restaurant, make it” experiments. I discovered that the spleen was porcine in nature rather than the almost-popular beef variety, which made it that much more attractive. I love visiting Lindy and Grundy, with the gleaming meat cases filled with every part of what walks, hops or flies around the barnyard; the meat trolley system snaking through the store like an abattoir amusement park ride; the neon art on white tile behind the counter that illuminates an old sign showing the cuts of beef drawn on a steer; I think what I love the best is when Erika “Grundy” Nakamura looks up from the butcher block, cleaver in hand and says, “I was thinking about you last week, Val – I had a goat penis in, but it was too small to be practical.” 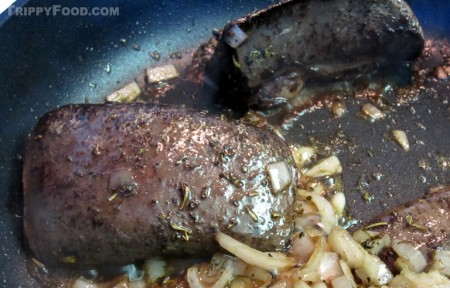 Spleen simmering in the pan

I left Lindy and Grundy with a single spleen (as I would only be cooking it for myself) and some of their house-made scrapple; my newfound quandary was how I was going to prepare the spleen. Amelia “Lindy” Posada suggested looking up British chef Fergus Henderson’s recipe for spleen, and in doing research I found his recipe along with suggestions for other ethnic dishes featuring spleen (vastedda, a Sicilian sandwich layered with beef spleen cooked in lard and garnished with ricotta cheese; an Italian crostini featuring chopped spleen; milzsuppe (a sturdy German beef spleen soup); and, gefilte milts, a rather ambitious stuffed spleen item). Taking a cue from the self-taught Chef Henderson, I decided to go it alone. I cut the spleen into three segments; laid out it looked like a primitive flat red eel or a two foot long tongue and I knew it would never fit in the pan. As soon as the meat hit the hot bacon fat in the skillet, it did an unusual thing – the meat contracted like a garden slug sprinkled with salt. In addition to shrinking in length it also plumped up, something I’d never encountered before. Once I’d seared the spleen I browned some onion in the pan and added some beef stock and a cheap pour of some Two-Buck Chuck, lowering the heat and allowing it to simmer. As a side dish I cut some Yukon gold and blue Peruvian fingerling potatoes into little disks; these I fried, resulting in what looked like a pile of checkers or two-toned coins.

I plated the organ meat with the onion sauce that cooked town drizzled about the top, and cut into a piece of the spleen (which looked like it would have easily given way to a fork’s edge). The texture was almost identical to cooked turkey liver (I hope that’s not too obscure a reference point), and the taste was unique. Since this was pig spleen and I have yet to try beef spleen, I can’t vouch for the common complaint that the meat is high on the funk scale with a muddy taste and strong smell – the pork spleen was mild, with a rich taste that was difficult to pinpoint at the initial forkful. Eventually the aftertaste kicked in which was plainly bloody in nature, although it didn’t have the heavy metallic taste usually accompanying blood dishes. Also surprising was the appearance; I believe the blood content of the spleen contributed to the dark, almost black color. The dish did not have an offensive smell; what aroma it did have was largely a result of the onion, Italian seasoning and wine.

Although I have a higher tolerance for offal and economy cuts of meat, I actually found the pork spleen to be flavorful and unique in texture; it’s an item that I’d try again, most likely at home as I’ve yet to see it on any menu. If you’ve been holding out on me and are aware of the dish appearing on accessible gastropub menus, you got some spleenin’ to do.

VIDEO: Watch the preparation and consumption of the pork spleen

5 Responses to God Save The Spleen