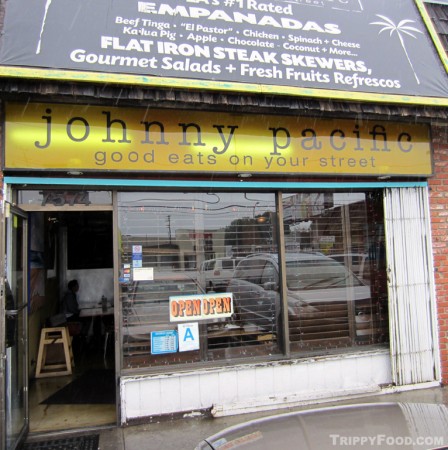 John Walquist was born into the food service industry and grew to love surfing; almost a decade ago he merged those two methodologies into a modest and casual establishment whose gruff exterior in a miniature strip mall belies the fusion cuisine within. The decor is island surf, with photos of tropical waves flanking a plasma screen playing video of hotdoggers dropping into the pipeline; an old wooden surfboard stands at attention near the counter. The chalkboard wall serves as the menu, displaying a variety of tropically-inspired dishes available with tributes to cuisines around the Pacific Rim, dishes featuring mango and coconut, satay skewers and fruit-infused salads. The real draw to Johnny Pacific, however, is their self-proclaimed, number one-rated empanadas. With at least fourteen meat and vegetarian empanadas to choose from and a handful of desert empanadas, making a selection requires some thought.

These aren’t your diminutive South American-style empanadas we’re talking about – these hand-made pastries are almost the size of your hand and are liberally stuffed with a variety of fillings, some rather surprising. The crust is thick without strong-arming the dish, and for the most part they’re crispy and not the slightest bit soggy. The sealed edges feature thick pleating that make a plate of these savory pies look like a herd of stegosaurs, which is appropriate since the empanadas are so substantial you’d need to bring the appetite of a velociraptor (I recommend getting at least four and sharing). 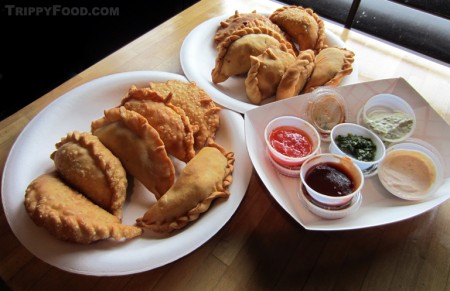 Most, if not all of Johnny Pacific's empanadas

Although the sans-animal flesh options are listed as “vegetable” empanadas, most of these also contain cheese (including one that only contains cheese); there didn’t seem to be a variety in taste in regards to the cheese – it all tasted like a mild Monterey Jack. In the vegetable category, there were some standouts and some that didn’t quite hit the mark; the spinach and cheese was crammed with fresh spinach that still had some texture to it and a fresh flavor that was not overshadowed by the melted cheese. The mushroom empanada was earthy and smoky with big, fat chunks of fungus lending an almost meaty taste, while the corn empanada boasted roasted corn kernels that smelled and tasted like they just came out of the smoker at the county fair (although the accompanying chopped poblano peppers and caramelized onions merely presented themselves in a minor supporting role). I was a little disappointed with the grilled veggie empanada – it really only appeared to feature asparagus and red bell pepper, and even though the proliferation of chopped garlic and onion helped, the pastry as a whole seemed a little lackluster. 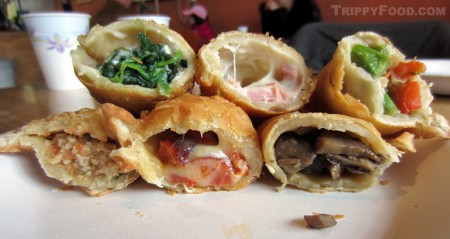 A cross-section of some of Johnny Pacific's empanadas

In the meat category, the options are diverse – there are two chicken empanadas on the menu: a savory ground chicken and a pollo al pastor. The former had the texture of ground beef and was perfectly spiced, approximating the best South American empanada in taste, yet even though the latter featured cubes of flame grilled yard bird the taste was lost among the other ingredients. The ham and cheese was another that seemed to be vanquished by the cheese, which outnumbered the pig in the empanada by about two to one. Although ample cups of dipping sauces (basil aioli, chimichurri, chipotle, barbecue, and sweet and sour Thai) were provided, the flavors of the empanadas stood well alone, although the ham and cheese needed some barbeque sauce to ramp up the flavor a bit. 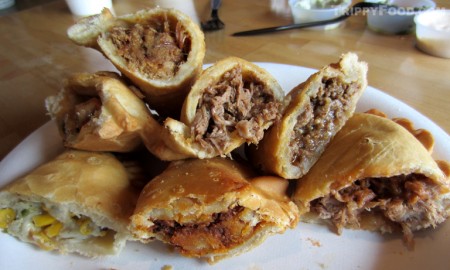 Another cross-section of empanadas

The ground beef empanada had a rich, savory tongue that hinted at cumin (although we were told that it is flavored with powdered vegetable soup mix) and had a subtle nod to a modest application of tomato.  Unfortunately the pulled pork empanada fell a little flat; the bottom of the pie was somewhat soggy, probably due to the inclusion of barbeque sauce inside. Although it was moist, it was also a bit mushy and somewhat bland, failing marginally in the spice department. The Cajun representative carried itself well, with big chunks of zesty Andouille sausage taking the lead in a pie bolstered with pepper, onion and the omnipresent Jack cheese. 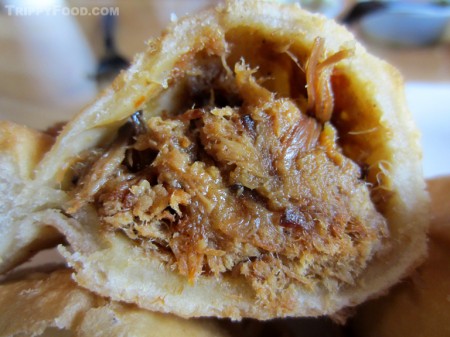 I reserved the remaining three for last since they provided the taste experience I want to remember Johnny Pacific for. The braised Kailua pork was exemplary; the sweet, smoky flavor evoked the taste of pig flesh pulled right off the animal as it sat on hot rocks in the sand and the spicy follow-through was memorable. Although similar in appearance to the pulled pork it had a little more resistance to the teeth and was plump, moist and bursting with flavor. The chorizo and potato empanada had a 50/50 blend of the main ingredients; although I feared the potato would steal the show, the chorizo provided a strong contrast and had a wonderful kick without any of the grittiness that sometimes accompanies substandard sausage. By far, the best of show was the beef tinga, and outstanding chipotle-infused meat dish that smelled intoxicatingly dessert sweet (most likely from the inclusion of a hint of brown sugar). The beef nuggets had a muscle fiber texture but weren’t chewy or gristle-bound; this will definitely be my first selection of choice on my return visit. 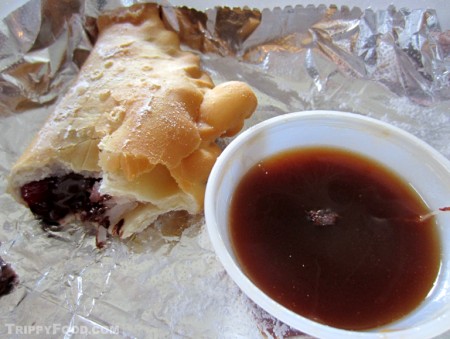 Although Johnny Pacific seems to be a Jack of all Pacific Ocean trades in search of an identity, you will undoubtedly enjoy discovering what that identity is as you sample a variety of their hearty and filling empanadas. More power to you if you manage to save enough room for their sweet dessert empanadas; moderation is in order if you don’t want to end up like I did in a wipe out, rag dolled after hitting an empanada wall.