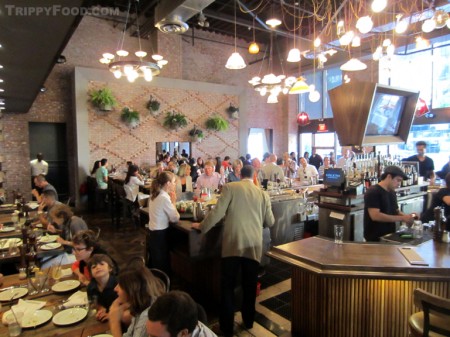 Brick and wood give Soleto a modern recycled look

Soleto is an urban enigma, an Italian bistro risen from the ashes of the former Zucca Ristorante in a building that from the exterior looks like an office front in downtown Los Angeles. The room is cavernous and modern, shiny, sleek and gleaming, yet finished with brick and reclaimed wooden floors; the Southern Italian-influenced dishes offered during Happy Hour are more akin to stuzzichini than large plates with artistically arranged foodstuffs. Soleto’s atmosphere is conducive to knocking back a few glasses of grappa or house-made limoncello with friends in a boisterous setting, and yet there’s something naggingly subtle about the feeling that you’re in an upscale trattoria. If you’re conjuring the image of an aproned waiter shoveling mass quantities of pasta onto the table from a wheelbarrow, well, paisan, you’ve come to the wrong place. 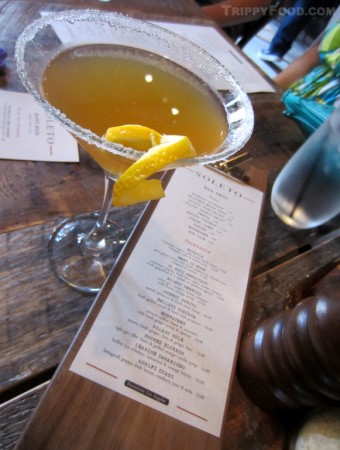 You could easily miss Soleto walking down the wide sidewalk past the lobby of the office tower the restaurant calls home; on the opposite corner of the building is a deceptively expansive patio for al fresco dining. The outdoor space is anchored by several story-high columns capped with modern art that mimics the colored art deco tile façade of the nearby Eastern Colombia Building; while the restaurant hints at a jumble of styles thrown together in an architectural mélange, there’s something comforting about it, having been raised in an Italian household where none of the plates and silverware matched.

Executive Chef Sascha Lyon’s background owes more to classic French than the cuisine of lo stivale, but he and the staff represent while adding a few twists. Some of the dishes take playful liberties with tradition – a calamari antipasto is sautéed in olive oil to fork-edge tenderness, augmented with a mild fire from chiles, marinated tomato and garlic; you’re likely to lose sight of the fact that you’re eating squid. Soleto’s beef meatball marinara pokes its char-encrusted, blackened flesh from beneath a cloak of marinara, its nearly crispy shell giving way to a hot, pink center. Even the egg and anchovy-free Caesar salad belies its Baja Californian roots, flashing a pedigree that’s more Julius Caesar than Caesar Cardini. 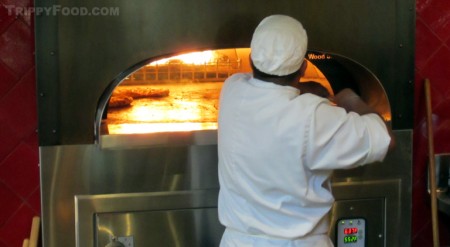 Although Soleto has not jumped on the same bandwagon as other fledgling Italian bistros that have installed massive stone pizza ovens, their gas and wood hybrid blast furnace blackens their pies to a crispiness that neither dries out the center nor leaves it doughy. Their potato and bacon pizza is astounding; topped with a fried egg, its yolk pierced to flood the top with its golden bounty, the pizza almost screams to be eaten for breakfast. The Skinny Pie is Margarita’s svelte yet flavorful cousin – topped with roasted tomatoes, firm blobs of ricotta and pesto, it is a tasty alternative tribute to the Italian tri-color. Even though the spicy smoked speck pizza comes packed with capsaicin, it turns in a more flavorful burn than some of the more established pizzerias that offer pies promising to deliver a hearty bout of Hades’ revenge. 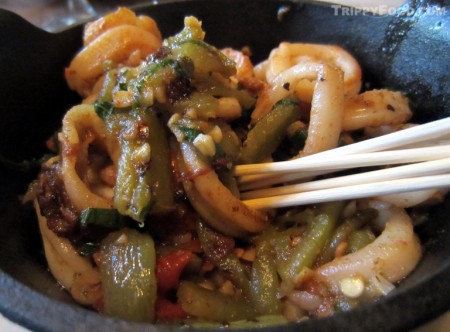 The pastas were a welcome departure from the typical Southern Californian Italian fare; none were drenched in sauce – the rigatoni ragu with sweet, house-made sausage was in a light, clinging Bolognese that inexplicably contained no tomato; the savory and rich pumpkin ravioli was treated lightly to a butter sage sauce and the pasta had some nice teeth to it, a refreshing change to the typical dish that features a texture closely resembling an overcooked Cream of Wheat mush. The tart angel hair a la Checca with firm goat cheese featured tomatoes in a three way that didn’t include puree – the pasta dishes were as beautiful as they were flavorful. 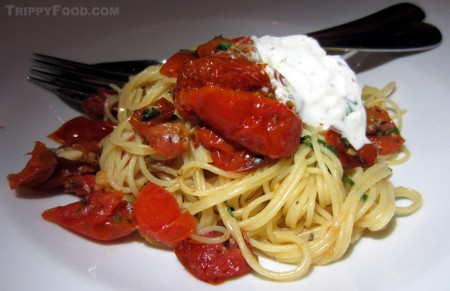 Unfortunately, as good as they were, the main courses took a back seat to the lighter and more creative small dishes. A light and flaky branzino Milanese was fresh and had a nice crumbly crust, but unfortunately the skirt steak that was said to have been balsamic marinated for 24 hours tasted brined with perhaps a tad too much salinity – its saving grace was that the meat maintained a curious muscle fiber that brought out the carnivore in me. 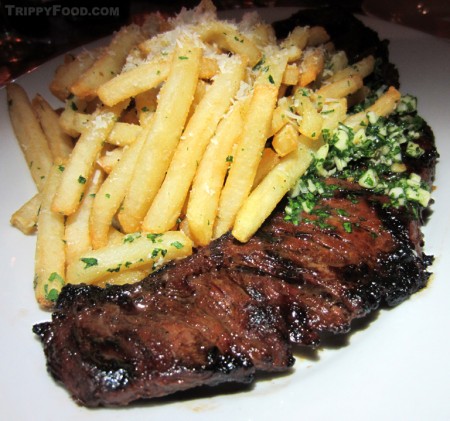 Soleto’s proximity to Staples Center and L.A. Live, as well as their extended hours (these go to eleven) make it a destination for post-event dining and drinking, as well as a great place to hang after the workday when other establishments are rolling down the grates. Sometimes when you’re expecting Joe Pesci or Sophia Loren, it’s refreshing change to get Louis Prima.