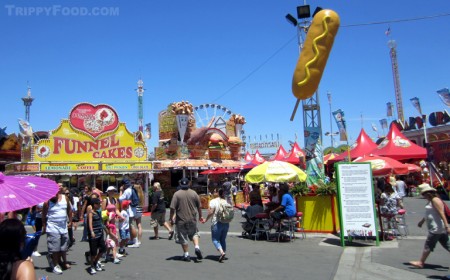 Big food is everywhere at the OC County Fair

The Orange County Fair has firmly entrenched itself into Southern California culture as the bellwether of the often lunatic cuisine represented at the other area county fairs. In recent years they have stepped up their game, shifting the focus of the fair from the fairway where testosterone-fueled athletes hurl $20 worth of softballs at milk can to win a $5 stuffed Despicable Me minion to a destination spotlighting sustainable agriculture and providing a venue for celebrity chef demonstrations and where gourmet food trucks circle their wagons. Each year, all eyes turn to the ubiquitous Chicken Charlie’s to see what food item previously thought unfriable finds its way into the hot oil to the amazement and occasional disgust of foodies and fairgoers alike. There is a treasure trove of unusual and surprisingly high quality comestibles hidden in plain sight, rubbing elbows with vendors hawking fair staples such as corn dogs, turkey legs and cotton candy; one must simply take the time to stop and smell the Mazola. 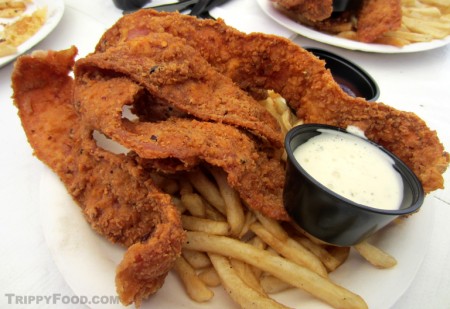 Navigating the corridors of carts and stands can be a daunting, expensive and cholesterolic experience done alone, but a group of plastic fork-wielding omnivores can get a liberal sampling of the delicacies the OC Fair has to offer without having to catch a ride home in an ambulance. I recently joined a group of food journalists on a walking tour of some of the fair’s 2012 culinary highlights, which included some new items in addition to some overlooked gems that have been on the menu in previous seasons. 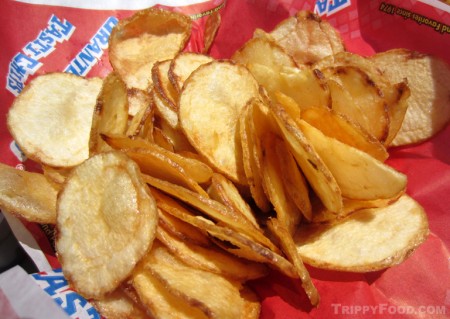 Bacon A-Fair is one of those monstrous carts that look like Dante’s Inferno Room with the lady of the evening replaced on their sideshow billboard with a nurse prepping a defibrillator. One might pass off the carnival-like appearance of the menu as garish and assume consuming items such as the “Meat-on-Meat Dog” or “Caveman Turkey Leg” may be hazardous to your health, but having Chef Mike Peterson present us with three of the second level treats was a taste bud-opening experience. The first item was a savory and succulent dish dubbed the “Porkabello” – a family of what is assumed to be baby Portobello siblings are generously stuffed with gouda cheese and then lanced, smothered in a blanket of bacon and grilled over an open flame; the skewer is then sprinkled with shredded aged gouda prior to serving. Naturally the first wave of flavor is delivered through the bacon, but each bite of the shrooms exposes the forbidden love between the tender fungi and the cheese. The second menu item was sheer genius; the dish is billed as “Beer-Battered Bacon” but “chicken-fried bacon” would be a more apt description. Thick slab-cut strips of uncooked bacon are dipped in a mixture of eggs and beer and then dredged through a spicy dry batter prior to immersion in the bubbling hell of the Frialator. The process is almost identical to making fried chicken, with the bacon cooking to a firm texture without getting all crispy and junk. Although the taste was reminiscent of the best country fry available, the porcine quality defined the dish. For desert, we were treated to chocolate covered bacon served chilled; rather than a perfect geometric rectangle, the melted Nestlé’s chocolate clung to the seductive curves of the fried bacon resulting in a lumpy, homemade appearance. There was some apprehension when Peterson suggested we sparingly sprinkle salt on the confection, but as cookout aficionados who have applied sodium chloride to watermelon will tell you, it actually amplifies the taste without making it too briny. 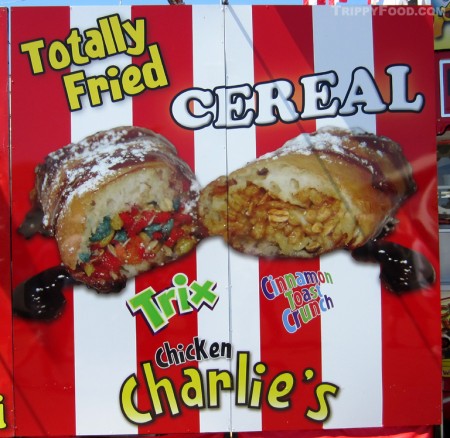 A brief stop at the oft-overlooked Legendary Gelato was worth the sample spoon encounter. All the gelatos admirably represented their ingredients; the coffee gelato was creamy and strong, the pistachio nutty and flavorful. By far the most popular flavor was their peach champagne, laden with tiny chunks of sweet, tender stone fruit and a hint of bubbly effervescence. The gelato was a temporary diversion while we waited for thin freshly-sliced white rose potatoes to emerge from their oil bath at Tasti Chips. Aside from the seasoned veterans in the group, there was a slight air of skepticism regarding a stand that served only potato chips but as the old adage goes, “the proof of the pudding is in the eating”. Apparently, the key to the perfect chip is using freshly unearthed potatoes no older than four days out of the ground. The chips fried to differing standards – some were thoroughly golden and crispy, while others had a soft inside area that concentrated the flavor of the potato; all were delicious. 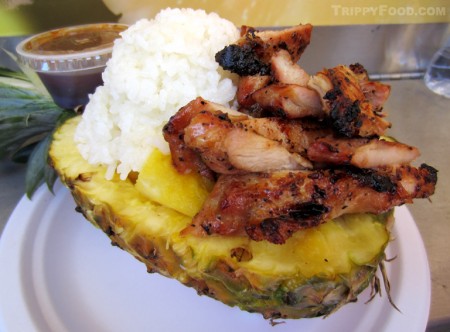 The Maui Chicken from Pineapple Express

Chicken Charlie’s fried item de jour was advertised as deep fried cereal (which employed Trix and Cinnamon Toast Crunch as the innards of choice), but as magically delicious as I’m sure they were, I was more intrigued by CC’s latest venture, a Pineapple Express cart inspired by a trip to Hawaii. While some of the items carried on the tradition of deep frying the bejezus out of the ingredients, they did a wonderful turn at couple of dishes that brought strains of pedal steel and ukulele to the palate. Their Naked Shrimp and Maui Chicken were similar in their preparation and presentation; a cored and halved pineapple acted as the serving dish for each, accompanied by white rice and chunks of the pineapple’s ultra-sweet and juicy golden flesh. Not being a big fan of chicken, I absolutely loved the long-marinated and grilled poultry, especially when combined with forkfuls of rice and fruit; although delicious, the spicy grilled shrimp took a back seat to the yardbird. Naturally, in the Chicken Charlie’s alternate universe Hawaii, the omnipresent SPAM makes an appearance in deep-fried format. Although the SPAM fingers resembled tiny corndogs, the coating is actually a tempura batter laced with lemon and garlic. The pig in a blanket is the ideal entry level choice for those wishing to foray into the seedy underworld of the canned spiced pork shoulder from Austin, Minnesota. The deep fried pineapple rings get high marks for the freshness of the fruit, but unfortunately the abundant moisture resulted in a batter that did not cling well and was a little soggy. 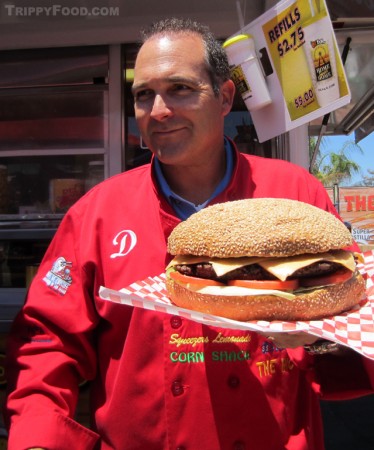 Dominic Palmieri shows of his burger featuring a 4 lb. patty

Biggie’s Meat Market doesn’t keep any dirty little secrets – the stand is visible from a considerable distance, marked by the Flintstonian representations of the food proudly displayed on the roof. One of the gluttonous food choices offered is the Bellybuster Burger, a behemoth with the approximate proportions of a small flying saucer; the beef patty alone weighs in at a hefty four pounds, prompting the question, “Where does he get such mammoth buns?” The Texas Tenderloin sandwich is a sharable affair featuring a football field-sized slab of pork beaten senseless, breaded and seasoned and then deep fried. It was reminiscent of a veal cutlet and accentuated by the application of a selection of pumped condiments and sauces. Owner Dominic Palmyra’s draw seems to be the meat club registered as a deadly weapon with the Costa Mesa police department under the name “The Big Rib” (“La Super Costilla” for our Spanish-speaking friends). I would not enter the two-pound meat hammer in a competition with any roadside Texas BBQ, but the meat was delicate and fresh. 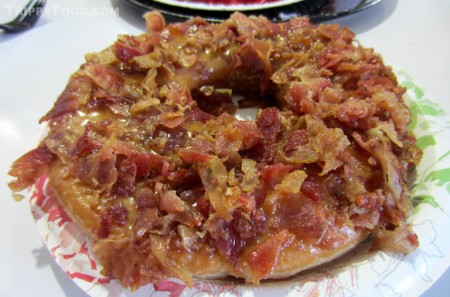 Defying logic, we opted to try a couple of the desert offerings at the fare while preparing for the onslaught of a food coma at the tribute to Ensenada’s historic watering hole, Hussong’s Cantina. The open air seating area looked more like Walter Knott’s re-engineering of the infamous Mexican saloon but we were simply taking table space to satisfy our sweet tooth. Michael Davis of Toucan Funnel Cakes presented us with this year’s model, a new red velvet funnel cake; there seemed to be an understated representation of cocoa in the confection, with the nod to the exceptionally popular bakery item seemingly in color only with only a hint of difference from the traditional funnel cake. Davis agreed that a drizzle of chocolate sauce might amp up the flavor a bit. Since we were sharing, the usual bypassed Texas Donuts became a viable option, having selected their take on the classic maple bacon doughnut in homage to Omaha’s now-defunct Swirls Bakery. While sweet, the maple glaze was more along the lines of a light maple syrup with the sticky goo holding the crumbled bits of bacon on the top of the doughnut. Even though their take is a fair contender for the crown, this is a dessert best eaten using the buddy system.

Although I’m sure I neglected a few unique nuggets of tasty fair food, our small sampling adventure left us to where we swore off eating anything else for at least the next fortnight. It may be hitting below the belt, but all’s fair in love and war.

NOTE: This cost for the fair admission and food was provided by the Orange County Fair. The content provided in this article was not influenced whatsoever by the organizer of the event.