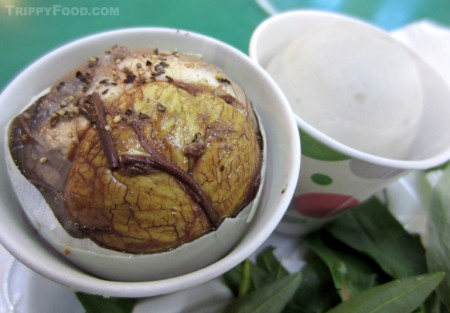 The first indication that this is not your typical egg

20th century cinema has given us creatures that evoke revulsion and fear, reducing audiences to howling, horrified school girls; who can forget watching the chest-burster plowing its way through John Hurt’s writhing body in Alien, or the disembodied head of Vance Norris (Charles Hallahan) sprouting spider legs in an attempt to escape incineration in John Carpenter’s The Thing? As horrific as these images are, the quivering little voice inside your head comforts you with the knowledge that this is simply cinematic technology at play, the product of skilled puppeteers, make-up artists and CGI techs. Nothing that Hollywood has presented to scare the bejeezus out of us can prepare the uninitiated diner for their first experience with the Southeast Asian street food known as balut in the Philippines, pong tia koon in Cambodia and Hột Vịt Lộn in Vietnam. At first glance, the dish seems relatively innocuous – the familiar faded white oval shell belies the evil that lurks deep inside, and if you’re not prepared for what you will inevitably tear asunder with each bite you could find yourself painting the carpet with Donald Duck’s progeny.

It would be a simplification to pass off balut as a “cooked, fertilized duck egg”. The operative term here is “fertilized”; although much of the hen fruit we consume has been fertilized by the rooster, the eggs are refrigerated quickly preventing the fetus from developing. With balut, candidate eggs are candled to find the ones blocking the light (an indication that there is a developing chick inside). As Mrs. Gump accurately opined, “Life is like a balut – you never know what you’re gonna get” – the eggs are incubated to varying degrees by location – the Filipinos enjoy theirs at a reasonable 14-day gestational period while the hardcore Vietnamese eat them up to 21 days after being laid. At the later stage in the egg’s development, all the features of the duck fetus are clearly visible (bill, feet and even tiny feathers); the yolk is interlaced with a network of tiny red veins, itself a discomforting sight. Clearly there is an opportunity here for the Easter Bunny to mete out justice to misbehaving rugrats by leaving something special in the Easter basket, ensuring that the air will be filled with cries not of joy, but of horror (Eddie Lin did just that in an Easter posting on his Deep End Dining web site). Like a box of Cracker Jack, there’s a prize inside every one, but I doubt little Timmy will be trading with his friends. 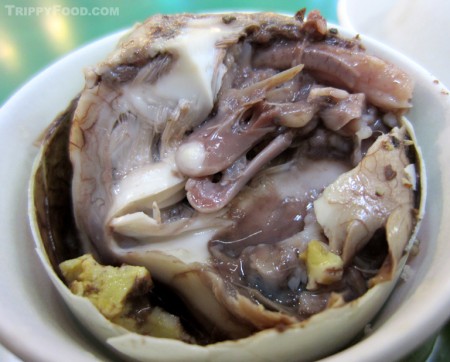 The beak is all that's left after the first bite

Although some Asian dishes substitute balut for raw egg, the general process for enjoying these protein-packed snacks is to eat them right out of the shell. The Municipality of Pateros in the heart of Manila is the epicenter of balut production; the name itself means “duck raisers” in the native Tagalog language and there are more street vendors selling these avian infants than anywhere else on earth. The shell is worked to remove a small cap from the top; the first step is to drink the “soup” (the thin fluid inside the egg) right out of the shell. A conservative application of salt, pepper, chili paste and/or vinegar is added and then the shell gradually removed bit by bit to allow generous bites. As an omnivorous consumer with no reservations about eating any of this planet’s life forms, I could easily bankrupt Fear Factor; however, I must admit here that my freshman attempt at eating balut involved ten to fifteen minutes of self-convincing before I took my first bite. Although I can now polish off one or two balut faster than Cronos downed his offspring, I was recently taken aback when after taking my first bite I noticed that Huey, Dewey or Louie’s beak was sitting on the top of the remainder of the egg with the rest of his head missing (presumably in my mouth). Once you become accustomed to eating balut, it’s make Way for Ducklings – it imparts a strong flavor that is a conglomerate of duck, rich egg yolk and offal with the flavor of whole duck soup. Although the taste isn’t off-putting, you may wish to forego eating what is left of the albumen, as it is usually reduced to a hard chunk (appropriately referred to as “the rock”) that offers the same dining experience as trying to masticate a Michelin steel-belted radial. 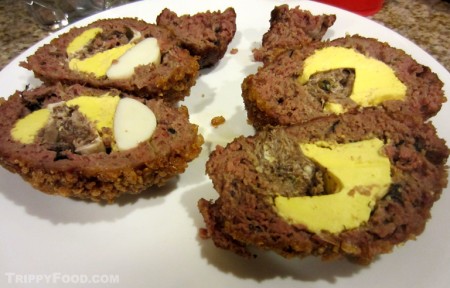 Although I favor traditional preparations and serving methods for most ethnic cuisine, I have taken balut to the next level, making an insidious version of the British treat, Scotch eggs (which could probably more accurately be called “deviled eggs”). Scotch eggs are simply hard boiled eggs, typically enveloped in ground pork sausage meat, painted with an egg wash, rolled in bread crumbs and then fried. The finished product is cleanly bisected to reveal concentric circles with a bright yellow yolk nucleus, surrounded by the white cooked albumen and rimmed on the outside with the brown sausage and fried coating. In the case of my hellish tribute, the balut served as the core, enveloped in ground duck sausage. I used raw unfertilized duck egg for the wash and rolled the ducky football in crushed crisp rice in an effort to translate the dish into Asian. After deep-frying to golden brown, the orbs were baked in the oven for about 15 minutes and then halved. 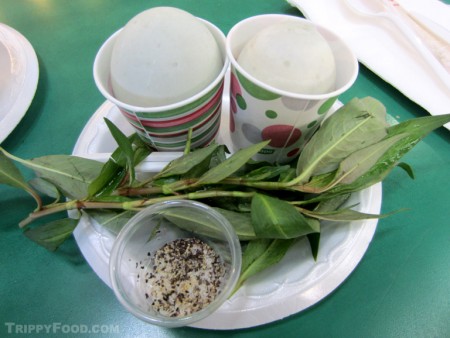 I wasn’t sure how the Scotch balut would turn out, but I knew as I sliced each through the center I would be creating and artistic work destined to be the talk of the dinner party and a subject for investigation by the authorities. As I only made a few, I ended up slicing them into much smaller sections after the party guests went back for seconds – at one point someone asked for a morsel “with more baby duck in it”. I never could have predicted the popularity of the dish, but was pleased that those in attendance were willing to try it and judge it primarily based on taste.

Balut isn’t a dish for the timid food adventurer, but once you’ve savored its rich bounty, the infanticide aspect isn’t quite so daunting. It’s a relatively cheap and easy snack, regarded by many as an aphrodisiac, although the odds of you getting lucky after consuming balut on date diminish as the likelihood is you’ll be left standing with egg on your face.

Special thanks to ExoticMeatMarkets.com for the duck sausage

2 Responses to Meet The Fetals