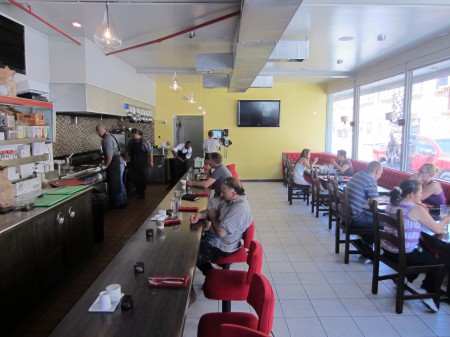 The newly-refurbished 54 Twenty in Hollywood

It’s a sweltering mid-morning in Hollywood; a man in a plaid short-sleeved shirt and a pair of jeans with frayed knees walks into a small diner that looks as though it has been pristinely preserved since the 1960s. As he makes himself comfortable in one of the red plush swivel chairs along the long faux-wood Formica counter top, he picks up a freshly printed paper menu and makes his selection from what at first glance appears to be a traditional diner menu. He requests the French toast and a cup of coffee, places his menu on the counter and quickly receives a sucker punch square against his jaw, his head awash in a myriad of stars – he has just been indoctrinated in a new traditionalism, the next wave of diner culture as imagined by Chef Kyle Schutte. 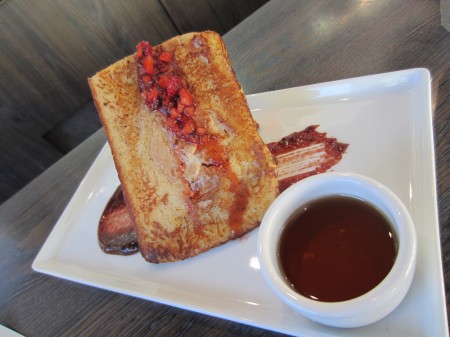 Chef Schutte has been plying his interpretation of molecular gastronomy since arriving in the Los Angeles area by way of Charlotte and Atlanta in 2010. While in residence in Marina del Rey’s Vū Restaurant, he was named by Angeleno Magazine as one of L.A.’s top young chefs to watch in 2011, although he admits that his experimental style was misunderstood in an area where the locals were complacent with chains such as Cheesecake Factory and Killer Shrimp – the texture and intense flavor of his sous vide eggs and other non-traditional takes on familiar items left them slightly confused. As Executive Chef at 54 twenty, Schutte applies those techniques to diner fare, turning that genre of cuisine on its ear. His heavy use of sous vide is borne partially out of the quality and flavor it imparts to the food and out of space considerations; since the every inch of space is open and exposed, storage considerations and appliances are at a minimum (several small freezers and refrigerators were installed around the cooking area with 54 Twenty depleting its inventory almost daily). Bread is the only staple that is not made in-house – everything else is handmade, right down to the ketchup. There is a small oven on the premises, but because resources don’t allow it to be turned down for some time, Chef Schutte  resorted to “sous viding” garlic for two hours in olive oil to compensate; when the result was tested he vowed never going back to roasting traditionally again. 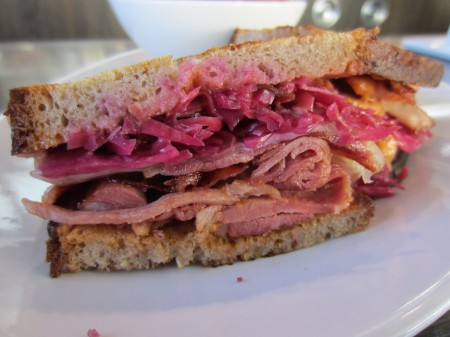 The corned duck Ruben is an onslaught of flavor

The restaurant is attached to the Dixie Hollywood hotel, formerly a Days Inn; it spent the first half century or so of its life as Angel’s Diner. By the time owner Deepa Patel hired young gun Schutte as Executive Chef, the space was looking a bit long in the tooth, a shadow of its former self. Schutte gutted the room, tearing out booths and replacing them with a long, plush banquette wall bench and tables and demolishing the lowered ceiling to its original height to open the room up. For Schutte, working in the open environment is conducive to the personal style of customer service he had been known for even at Vū where it was not uncommon to see him working the room, talking to the patrons about the food and even bussing tables. 54 Twenty has been dubbed a “guestaurant”, and although the first inclination would be to assume the moniker referred to it being part of the hotel, Schutte explains that the industry term essentially describes a dining experience that is part dinner party, part intimate restaurant. For the time being the menu offers all-day brunch dining (through 9 PM); by request of patrons who arrive at the evening looking for dinner items, a tasting menu is planned for late in the fall that will feature 5 to 9 courses. 54 Twenty has not yet been granted a liquor license, but encourages diners to bring their own bottle. 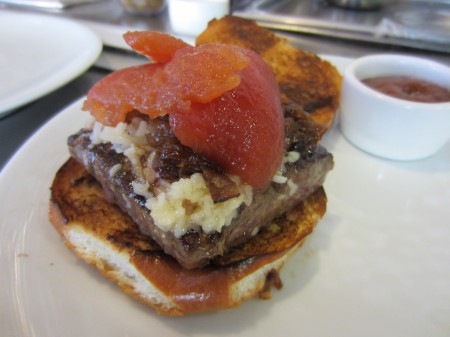 The coffee beats the pants off the garden variety cuppa joe available at your neighborhood greasy spoon; their caffeinated staple is from local roasters Handsome Coffee Roasters. If you’re leaning towards the “br” side of brunch, Chef Schutte takes the familiar and re-engineers it into a unique breakfast experience; the steak and eggs features Paso Prime top sirloin cap coulotte sous vide in chimichurri with triple-cooked fries tossed in ketchup spice and sous vide-baked eggs; the off-menu bacon and eggs includes a 6-oz slab of Niman Ranch ham sous vide in maple syrup. The French toast is recognizable in name only – the massive wedge of bread is stuffed with cinnamon cream cheese and is positioned over a scrape of strawberry and thyme jam; a small container of syrup is placed on the side with an intoxicating blend of maple syrup infused with vanilla bean and star anise. To describe the dish gives the impression of a dentist’s nightmare, but the sweetness is cut by the flavors of the other ingredients; texture-wise, the softened cream cheese plays off the spongy quality of the bread and is complemented by the condiments. 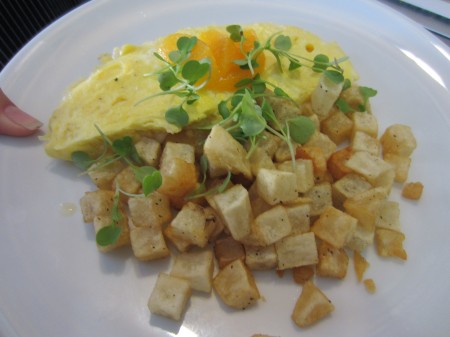 The outstanding dish that raises a defiant finger to local delis, diners and drive-ins is the incomparable duck Reuben. Chef Schutte starts with free range duck from Mary’s (Pittman Family Farms) which is brined and then sous vide in the brine, after which the outside flesh is then seared. The top layer of the sandwich is populated with a pickled red cabbage that packs an explosion of equal parts sweet and sour – after finishing the sandwich it seems unfathomable to consume it without the slaw. A layer of gruyere cheese is added and the rye is then grilled and served with house-made potato chips. 54 Twenty has a slicer that shaves the potatoes razor-thin, but when the hardware becomes uncooperative they are sliced by hand; salt is added sparingly towards the end of the cooking process and the wispy chips are tossed with pastrami spice, resulting in a light-as-air potato wafer that dissolves on the tongue.

Unique touches accentuate traditional fare; the BLT is dubbed the “B³LT” as it features bacon three ways, including the bread being grilled in bacon fat; the short rib burger is capped with ketchup tomatoes (quartered Romas which are skinned before pickling with ketchup flavors) that keep the bun from turning into a soggy mess. 54 Twenty is changing the way we think of a slice of Americana that is going by the wayside, revitalizing and taking the cuisine to the next plateau; think of it as Guy Fieri with a pedigree.