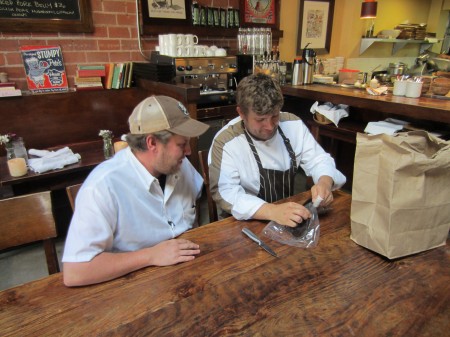 As readers of Trippy Food already know, friend and fellow foodie Eddie Lin and I have collaborated on many events, including podcasts, videos posted to KCRW’s Good Food blog and videos that have appeared in previous Trippy Food articles. For those who don’t know Eddie, he is the author of Lonely Planet’s Extreme Cuisine, and has published articles in the New York Times and the Guardian as well as maintaining his own blog, Deep End Dining. Eddie has appeared on episodes of The Travel Channel’s Bizarre Foods (with Andrew Zimmern),  CSI:NY, and Huell Howser’s California Gold, has been a judge on Top Chef Masters, and has been a regular contributor to KCRW’s Good Food and The Madeline Brand Show on KPCC. We have shared many exotic culinary adventures sampling everything from armadillo soup to braised nutria, and are now escalating this love of unusual cuisine to video via our new YouTube Channel, Kamikaze Kitchen. 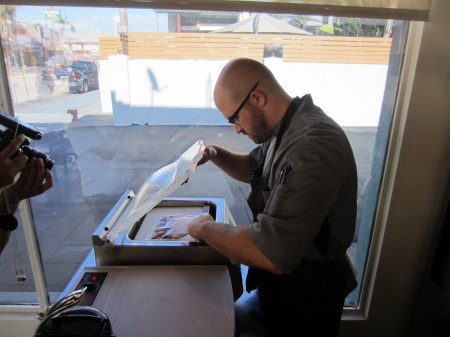 The idea for the show was born as collaboration between Eddie and me back in 2011; we wanted to create an entertaining program that introduced new audiences to exotic dishes while working with some of the top and up-and-coming chefs on their own turf, essentially bringing the show to them. Whereas many of the chefs have previously participated in contests that pitted them against one another, Kamikaze Kitchen challenges the chef against his or her own skill and imagination. Eddie and I barge into the chefs’ kitchens like a bison in a china shop bearing a plain, brown bag, defined only by the question mark emblazoned on the outside. On each episode, a chef is presented with a unique exotic and is given some time to transform the questionable ingredient into something edible and delicious. 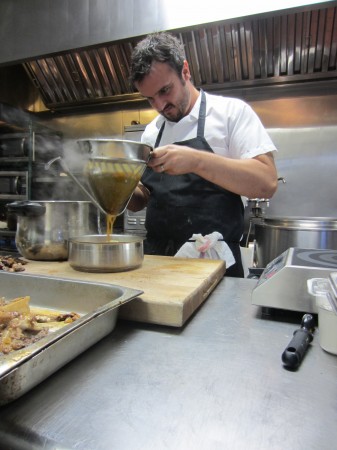 Along the way in each episode, we eventually wear out our unwelcome status, having pushed the chefs’ patience to its limits; it’s one of the few opportunities they have to participate in a competition where Eddie and I end up getting voted off the island. To date, we have worked with a variety of chefs with diverse backgrounds, and have been impressed with their ability to rise to the challenge and create dishes beyond our wildest expectations.

Episode 1 launched on September 24; it features Executive Chef Benjamin Ford and Chef du Cuisine Gavin Lansdale at Ford’s Filling Station in Culver City, California. Ford’s Filling Station is no stranger to preparing food using unusual cuts, having been an early adopter of the nose-to-tail methodology, but we presented them with an ingredient that tested their mettle, resulting in dishes that lend themselves to a hilarious cavalcade of double-entendres. The best way to keep abreast of new episodes is to subscribe to the YouTube channel at /TheKamikazeKitchen; you can also follow us on Facebook and Twitter, and chef bios and recipes will appear on a separate blog at  http://kamikazekitchen.blogspot.com. 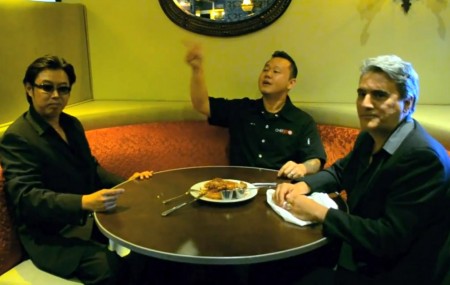 I will continue to provide the same articles you enjoy on Trippy Food, and hope that you also enjoy this new venture as a video adventure that expands our coverage of unusual cuisine and entertains at the same time. Thank you for continuing to follow Trippy Food, and for checking out and spreading the word about Kamikaze Kitchen – if you love watching it half as much as we do making it, we’ll love it twice as much as you!