Cafe Noir Is The New Black 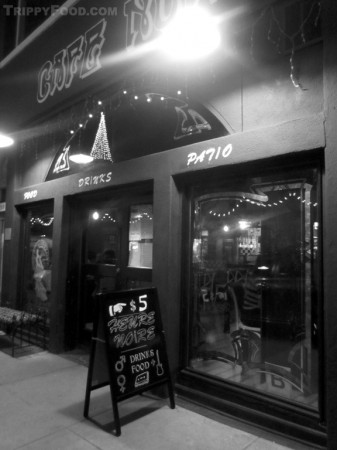 The dark side of French cuisine, Cafe Noir

Santa Monica’s Cafe Noir stealthily hides in the open, a converted ninja bistro dressed in black and only slightly hinting at its former life as Madame Chou Chou on artsy and hipster Main Street. One look at the restaurant, inside and out, and the words of the philosopher Nigel Tufnel come to mind – “How much more black could this be? And the answer is none. None more black.” – the black matte walls feature what look like some chalk Art Nouveau line drawing vs. Aubrey Beardsley mash-up; an opulent, low-wattage, pink-hued chandelier dangles from the ceiling taking up most of the upper real estate. Instead of a simple banquette, the space is bordered with a long, plush sitee bordered in what looks like segments of a massive gilded and flourished frame.

After the demise of Madame Chou Chou, the bakery cases were scrapped to make room for tables, adding twice the service of its previous incarnation. Vincent Carneau remains on board as owner and Executive Chef – the dishes are reinventions of what he likes to think of as traditional European bistro fare. Some dishes change according to whim – rather than trying to appeal to the American palate and expectations of what French-inspired cuisine should taste like, Chef Carneau lets his heart be his guide. He is honest to a fault, and when asked about an appealing sounding menu item, he may respond with, “I find it boring”. The room is small, but with plenty of elbow room, and when Cafe Noir begins to fill up, the experience spills out into the enclosed patio. 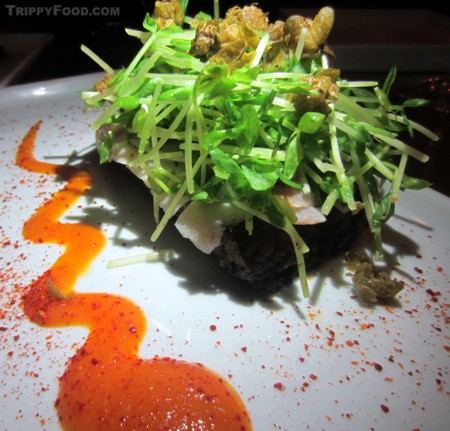 Some of the dishes are small, tapas-style offerings (particularly during happy hour), but the entrees are luxurious and hearty. A roasted beet salad features dove-tailed medallions of red and golden beets topped with a crumble of French St. Agur blue cheese and a slightly sweet and tart raspberry glaze – even carnivores will enjoy the salad, as it doesn’t impart that earthy reminder that typically accompanies under-processed root vegetables.

One dish featured a single halved beef bone lined with bubbling bone marrow and flanked by large slabs of crostini crowned with a rich and flavorful duxelle of shitake, Portobello and chanterelle mushrooms; the bouillabaisse was packed with PEI blue mussels, Manila clams, shrimp, baby squid and chunks of fish in an aquatic wonderland of saffron lobster broth that begged to be sopped up with the freshly baked bread. 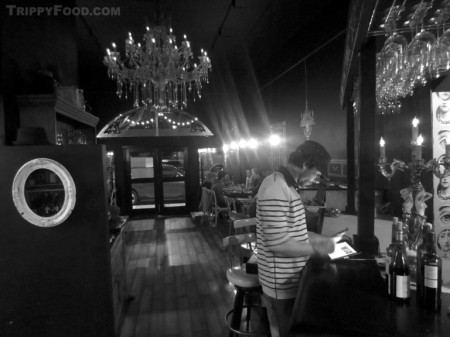 What was billed as sushi-style paella is a bit of an oddity – a block of paella rice is fried with a dark brown crispy crunch, with hamachi crudo laid to rest on top and garnished liberally with pea shoots, making the components of the dish almost visually unidentifiable. The saffron flavor of the rice is unmistakable, but the texture takes you to another place; the hamachi hides beneath the ample greens, only occasionally showing itself and making its presence known. A slab of very fresh-tasting hazelnut-encrusted trout leans on a mound of fingerling potatoes and spinach with the vegetation nicely accompanying the fish. 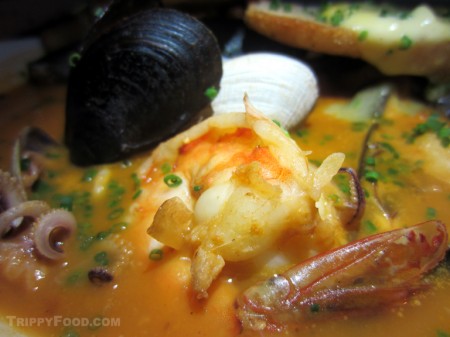 The bounty of the sea in Chef Carneau's bouillabaisse

For the carnivore connoisseur, a hefty club of braised lamb shank guards toothy couscous and carrot slices, but with the tender meat falling off the bone like a melt-away pot roast, the accoutrements get largely ignored. Pork abounds – on the brunch menu, one dish features “pig juice”, which I am informed is pork jus (although I prefer the aforementioned moniker and imagine a hot steaming mug of pig juice accompanied by a straw); the ample pork belly entree is thick with slightly crusted and unctuous fatty layer, and served with white beans and spinach it takes on a soul food vibe that is all delicious.

Cafe Noir is refined without being stuffy, traditional sans pompousness and with a creative flair. One visit and you will be seduced by the dark side.