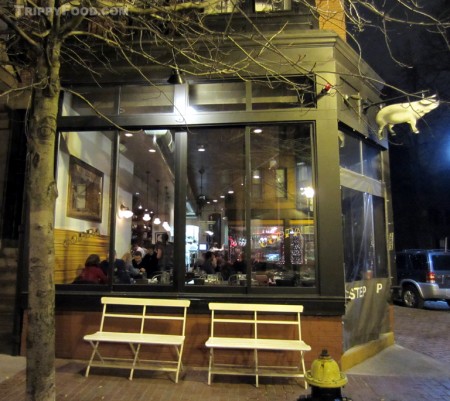 Boston’s Coppa Enoteca occupies a thin sliver at the end of block of South End red brick townhouses, easily several hundred years old. The narrow gastropub is subtly identified by a simple, gold leaf-lettered “COPPA” in the front window – on approach, one would easily overshoot the runway were it not for the flat metal pig hanging high above the doorway. The rustic interior, antique light fixtures and historic location belies Coppa’s youth (a mere toddler, having been opened in 2009), but the venerable appearance is befitting of the fare offered. Although Coppa is lumped into the category of Italian restaurant, it would be completely out of place in the North End – the dishes are tapas style and although influences and treatments from the Old Country abound, it flaunts a unique personality. 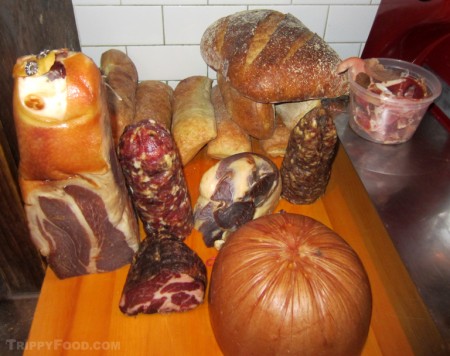 A representative sample of Coppa's salumeria

The workaholics behind Coppa Enoteca’s “nose-to-tail” philosophy are co-owners and Executive Chefs Jamie Bissonnette and Ken Oringer, who have a history together as helmsmen of sister ship Toro (a Spanish tapas restaurant opened by Oringer in 2005, also in the South End), as well as the recently closed (and highly acclaimed) KO Prime at Boston’s Nine Zero Hotel. Both chefs oversee a vast empire or eateries throughout New England, and if the unique and innovative cuisine at three year-old Coppa Enoteca is any example of the bill of fare at their other venues, Bissonnette and Oringer appear to be poised for global gastronomic dominance. Chef Jamie Bissonnette was bestowed the prestigious title of Rising Star by StarChefs, while Chef Oringer was three times James Beard-nominated as Best Chef Northeast (handily winning the award in 2001) and reigned victorious during appearances on Iron Chef America and the Food Network’s Ready, Set, Cook. 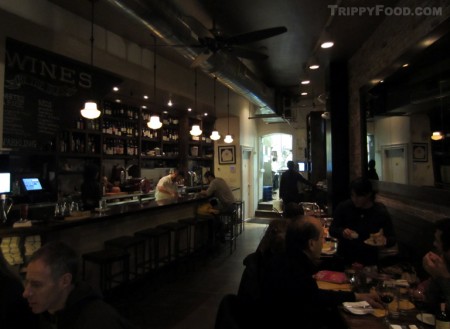 The small but comfortable Coppa in Boston MA

Reservations are recommended – with under a dozen tables and as many spots at the bar, it’s remarkable how quickly Coppa fills up early in the evening. Unless you don’t mind paying Boston parking rates or walking the brisk half-mile from the Tufts Medical Center Orange Line station on the T, know that since Coppa is in a residential neighborhood, street parking nearby is at a premium. While your dining companion may prefer a table in the bustling pub hub-bub, if you’re flying solo I highly recommend a spot at the bar, where you can watch the preparation of the small stuzzichini dishes (such as the Panino di Riccio di Mare – sea urchin and lengue panino with mustard seeds; and Ostriche – oysters escabeche with cranberry verjus and apple), antipasti and charcuterie/salumeria (the restaurant’s name derives from another name for Italian capocollo) while you select from a dizzying selection of Italian wines. 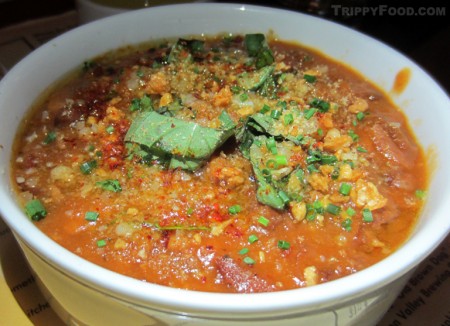 Items on the menu rotate in and out, although some of the more popular dishes are featured regulars. My indulgent foray through Coppa’s repertoire began with a delicate tuna crudo that virtually dissolved on my tongue – although the squares of ahi were topped with chopped green olives and capers, razor-thin radish disks, chili shavings, and an olive brine dashi, the tart and acetic accoutrements did not kill the fish’s light flavor.

Coppa offers small wood-fired pizzas with house-designed combinations such as the Pepe Bianco (populated with clams and bacon); a white bone marrow pizza with beef heart pastrami and horseradish; and, a hearty pumpkin pizza with the pureed gourd substituted for tomato sauce and finished with fresh burrata and a fried egg. For you Roberto the Builders, you can engineer your own creation with a variety of toppings including blood sausage, fried egg, arugula, and mortadella at a mere $2 each. Although the pizzas being rocketed out of the kitchen from atop a small staircase at the far end of the restaurant looked and smelled wonderful, I opted for some of the dishes utilizing cuts of meat Fergus Henderson would be proud of. 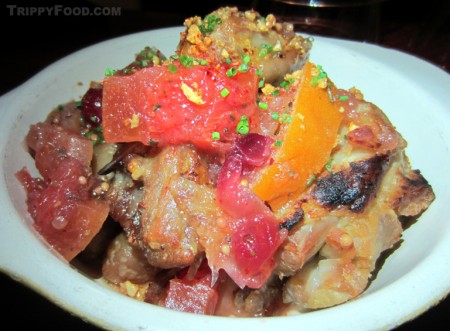 Dishes are brought out as they’re prepared, so don’t expect the wait staff to show up with a truck tire-sized tray with the table’s entire order in tow – the first of my selections to arrive was the Trippa alla Collinsville, a crock of tripe and pork belly stew with heirloom garbanzo beans that was cooked down into a chili-like consistency (the comparison was further accentuated by the rich, spicy tomato and garlic-based sauce). I had expected to bite down on chewy pieces of rubbery tripe but was astounded to find that it had cooked down to be indistinguishable in texture. The hearty and warming bowl cut through the chilly late-November afternoon, making me wish I had eaten it last before heading back out into the street. 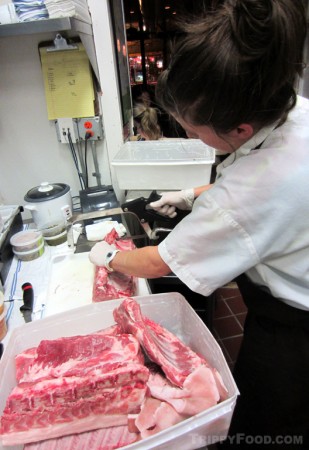 Sous Chef Kathryn Christensen breaks down a rack of ribs

The Coda di Maiale was outstanding; a small stack of fire-roasted pig tails were frolicking in a bowl topped with a moustarda glaze featuring thick chunks of candied vegetables and fruit – one such unidentified bit tasted like a cross between yellow squash and grapefruit, with many of them bearing a similarity in taste and texture to the sweet peels used in fruit cake. The pork corkscrews had a delightful smoky flavor; even though the moustarda was prominently sweet and sour it did not overpower the pork. The fatty meat was tender and moist, easily separating itself from the tiny, interconnected tail bones with a little deft tongue work.

Coppa is an unpretentious bistro that could easily be confused for just another neighborhood bar were it not for the superb Italian-influenced cuisine that carries forth the nose-to-tail philosophy in a casual and boisterous atmosphere, and that’s no baloney.