Save A Cow, Eat A Bug

3rd Annual Bug Fest at Ripley’s Believe It Or Not!
Hollywood, California 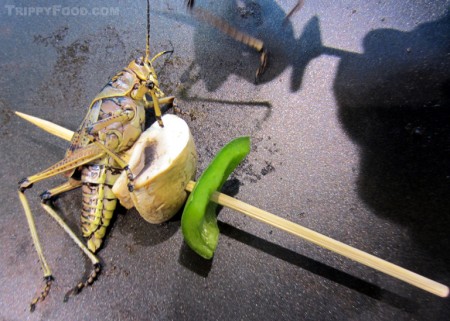 Memorial Day weekend – you’ve just grilled that rib-eye that only hours before was calling your name through the cellophane while it lounged on a Styrofoam tray in Piggly Wiggly’s meat case. Just as you ready your steak knife and the tines of your fork plunge into the seared bovine flesh, a grasshopper makes a perfect vertical landing in the middle of your steak. You brush off the spry hopper and consider throwing the meat in the trash, feeding it to your faithful canine companion, or scraping off a thin layer of the steak and slapping it back on the grill. It turns out that according to a new report by Food and Agricultural Organization of the United Nations (seductively titled, “Edible insects: future prospects for food and feed security“), you’ve essentially chased off the true sustainable low-fat source of protein and the key to feeding the burgeoning, teeming masses as the human population soars over the next several decades. Entomophagy (the consumption of insects as food) isn’t the latest food trend; it’s been around since humans have been eating anything that moves, and is still prevalent in many cultures, but is slow to catch on in American cuisine. 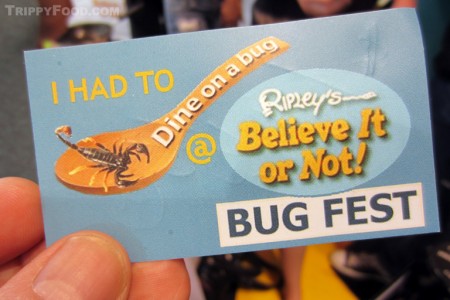 Dined on bugs because I wanted to, not had to

The Ripley’s Believe It Or Not! Museum in Hollywood, California aims to replace that flyswatter with a spatula at its ongoing annual Bug Fest held in the museum’s lobby. As enticement to eat on the wild side, Ripley’s offers discounted or free admission (depending on the Fear Factor level of creepiness of the consumable critter), to be determined by The Bug Chef himself, David G. Gordon. Gordon is a native of Seattle, although he frequently takes his bug show on the road in addition to staging dinners in Seattle that would be the envy of Explorer Club diners. Author of such sultry, steamy tomes as “The Field Guide to the Slug“, Chef Gordon has also penned several cookbooks that give the term bug zapping new meaning, including the popular “Eat-a-Bug Cookbook“. The cooking demonstration is an extravaganza of epic proportions, and that familiar train wreck, deer-in-the-headlights look is a fixture on the faces of the attendees watching the show unfold. Crowned with an antennae-accessorized toque blanche, Chef Gordon towers over to what most people amounts to a reason to call the Orkin Man: several tapas-sized plates containing pairs of huge eastern lubber grasshoppers; giant desert hairy scorpions; over-sized crickets from Central America; and a lifeless, palm-sized tarantula. Bowls on the table held ready-made bug snacks (spicy Oaxacan chapulines and a Chex Mix featuring roasted crickets) as well as ingredients for the cooking demonstration. 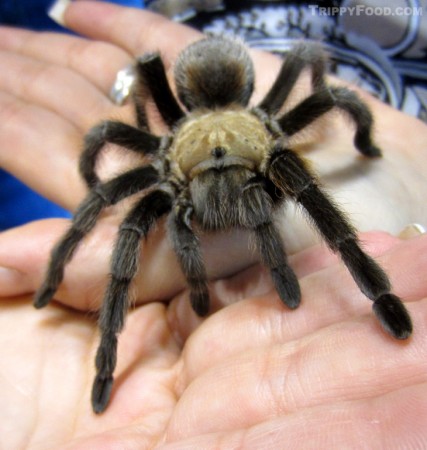 Siete (a 7-legged tarantula) was not on the menu

During the presentation, Ripley’s manager Andrea Silverman worked the crowd by letting them cuddle with Siete, a live 7-legged tarantula saved from the Frialator. Chef Gordon acquires all his meats alive, and to the surprise of many, humanely dispatches them by placing them in the freezer where they drift off into a permanent sleep like (in Gordon’s words) a character in a Jack London novel. For most in attendance, the thought of intentionally ingesting insects is akin to driving penny nails into your own eyes, but Chef Gordon reminds them that they probably already unknowingly do. Handing out small cups of ruby red grapefruit juice, he informs the crowd that the beverage gets its red color from the carmine dye extracted from the crushed bodies of the cochineal insect; this coloring agent is used to color consumables from lipstick, to Good and Plenty, to alcoholic beverages such as Campari (take that, negroni lovers).  Gordon is quick to remind the audience that the scorpions and tarantulae are not true insects, but are an evolutionary baby step away from lobsters and crabs – bibs not required. 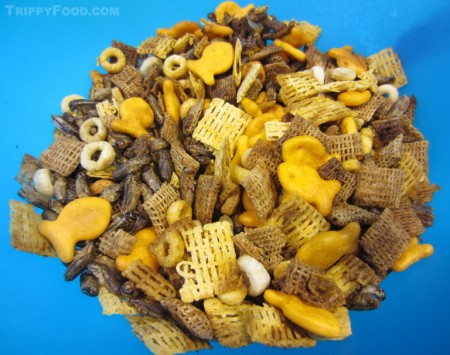 A slight admission discount is given for the entry-level snacks, with the cricket party mix being the safest; in fact, the flavor of the crickets themselves are pretty much masked by the other ingredients, allowing them to simply add texture and character to the snack. The chapulines are pretty commonplace in Hispanic markets in the Los Angeles area to where inclusion of these Mexican grasshoppers was almost mundane, at least until Chef Gordon speared them and dunked them into a rich, dark chocolate fondue. The smoky, crisp chapulines provided a savory accent to the chocolate and chiles – entombed in their cocoalicious blanket, these tidbits are guaranteed to melt the heart of your insectivore sweetheart. The bigguns required a bit more intestinal fortitude from the audience – there was nothing to mask the appearance of the colossal lubber grasshoppers from Florida. These 3-inch-long leaf-chewers were speared through the middle with a mushroom and chunk of bell pepper and then grilled with a dash of lemon juice, and there was no effort made to remove the legs or antennae. Fortunately, the grill was hot enough to firm up the typically mushy insides to where the grasshopper had a light, inoffensive, meaty taste, and the exoskeleton was crunchy enough to finish it in one bite. 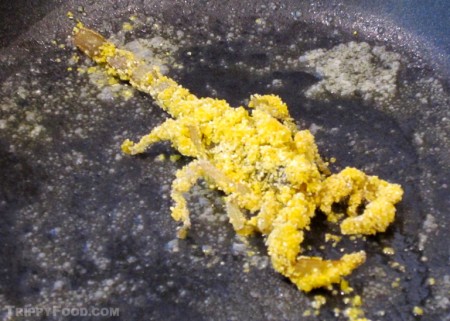 Chef Gordon had a more elaborate preparation in mind for the scorpion, creating a dish he dubs “scorpion scaloppini” – after pinching off the venomous telson, Gordon dredged the arthropod through some milk and coated it in corn meal before pan frying it in butter. The inside meat had a shrimp-like flavor, but unfortunately the shell was not crispy enough to fully breakdown after considerable chewing. The tarantula was the pièce de résistance; the hairs were singed off with a lighter (Gordon formerly used a blowtorch but found that it cooked the spider) after which a coating of tempura batter was applied previous to deep-frying. The tarantula was dusted with paprika before serving, and Chef Gordon educated the crowd on the fact that the tarantula is soft-bodied, making the dish equivalent to a soft-shelled crab. Of all the bugs served, it was the meatiest – the flesh inside the legs had the texture of chicken, with a mild, unique flavor that made eating the spider a true treat. 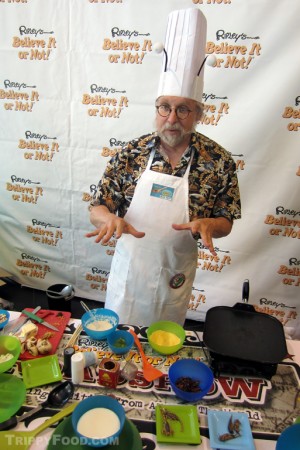 The annual Bug Fest is a unique opportunity to learn first-hand about what might possibly be the ultimate sustainable food of the future while expanding your own gastronomic horizons, but feel free to simply observe if the thought of consuming insects bugs you.

GALLERY: See images from the 3rd Annual Bug Fest at Ripley’s Believe It Or Not! in Hollywood CA

VIDEO: Watch news clip of the 2013 Bug Fest at Hollywood’s Ripley’s Believe it or Not!