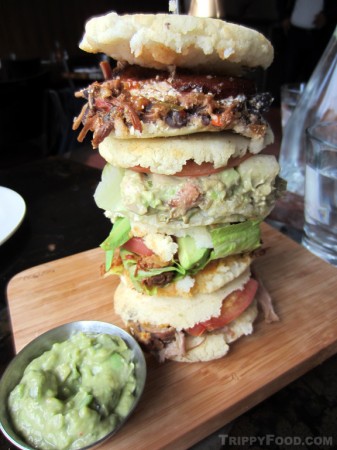 It may come as a surprise that some of the most ingenious inventions or discoveries made over the years were not the by-product of countless man-hours slaving over a hot Bunsen burner, but rather the result of a happy accident; this list includes penicillin, x-rays, Silly Putty, and the arepa tower at Pica Pica Maize Kitchen in San Francisco. While the possibility of a Nobel Prize looks bleak for restaurant founders (father and daughter Leopoldo López Gil and Adriana López Vermut ), the native Venezuelans have debuted a menu item at their newest restaurant in the epicenter of The Castro that is garnering notice in culinary circles beyond the Golden Gate. Chef Monica Varela and restaurant partner and manager Tom Carlaccini were playing food stylist for a promotional photo shoot and tried to come up with the best way to present several of the stuffed arepas from the menu photographically; the choice was made to assemble the Venezuelan sandwiches vertically with a spike running through four of them for stability. The high-resolution still of the stack was eventually framed and mounted in the restaurant, prompting patrons to order the dish. 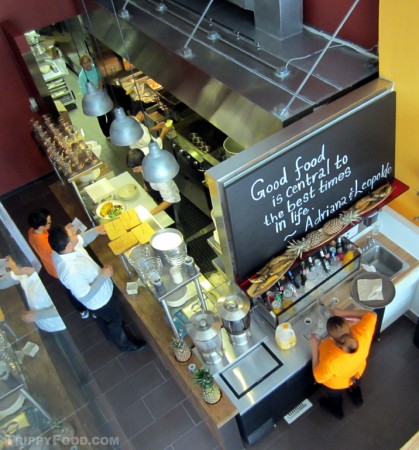 Arepas are Pica Pica’s bread-and-butter; the traditional South American corn cakes are about a quarter-inch thick. There are a variety of ingredients available that can fill the empty space between two moist, grainy and lightly grilled arepas; individually, these are about the size of a pupusa, but when ordering the arepa tower the quartet of South American sammies, smaller palm-sized discs are used. You could spend hours concocting the perfect fab foursome from the available fillings or simply trust the chef to put together a towering masterpiece of culinary delight. A vegetarian option comes filled with black beans, tofu, avocado and plantains; chicken rears its pointy little beak in a spicy version and a chicken salad with apple and avocado. Carnivores cruising The Castro in search of meat will be satiated with the tender and savory pork and beef options – unless you’re a competitive eater by trade, consumption of the arepa tower is not recommended as a solo act. 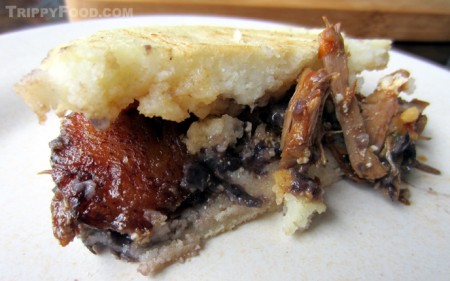 Although the arepa tower is Pica Pica’s estrella brillante, the other menu items are outstanding. Yucca (the obligatory Caribbean root starch) is cut into thick blocks and served golden and crispy in a Belgian-style cone; the side dishes are fresh and flavorful. Bottles of sturdy, house-made mojo salsa of chiles, onion and vinegar grace each table, and after the culmination of the orgiastic feast your bill arrives at the table tucked into the frontispiece of a Venezuelan paperback novel. Pica Pica is still negotiating a liquor license and can be difficult to find as the only signage is a lettered door, but it’s worth hunting for to enjoy well-executed modern spins on traditional Venezuelan cuisine. The space is sleek with granite tabletops and clean lines, although the máscaras de diablo and portrait of The Diablo Queen watching over you while you dine may be a little unsettling.

While the arepa tower is a unique invention that brings diners to their newest location, the quality and presentation of the dishes is what will define Pica Pica Maize Kitchen as a superlative Venezuelan cafe that towers above the fray.

2 Responses to Tower Of Flour