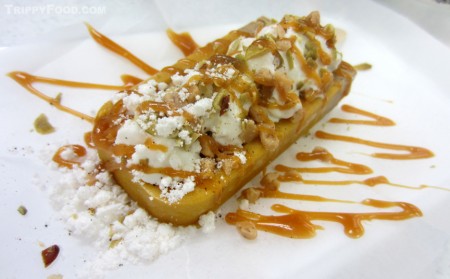 Nothing short of a DeLorean with a flux capacitor transports us back to a hot summer day in the sandlot with a troupe of sweaty, snot-nosed kids running towards the street faster than the unmistakable chimes of the Good Humor man, visions of cold, icy popsicles dripping their sticky lifeblood down the length of dusty shirt sleeves. Far from a healthy snack, this sugary, glacial confection sent us into a state of hypoglycemic shock, mouths rimmed with colored food dye as our teeth hurt and sinuses succumbed to the cold. Up until now, there’s been little satisfaction as an adult, peeling back that paper or plastic wrapper and lapping a frigid sucrose and faux fruit bar – but that feeling is back with the establishment of The Ice Bar in West Covina, California. 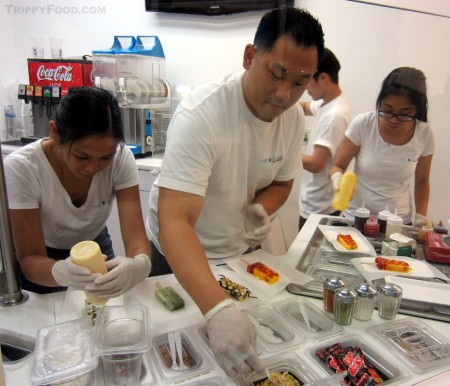 The crew at The Ice Bar creating frozen masterpieces

The ice cream that shares top billing at The Ice Bar is the bait; there’s nothing spectacular about its flavors or manufacture (no small-batch liquid nitrogen fruit purees and sweet cream confections being created on demand here). Those who come in for the ice cream are drawn to the ice bar menu on the wall and discover that this ain’t the Firecrackers your freckle-faced shortstop cooled off with under the July sun. The ice pops lay in formation in a glass-fronted freezer, their unusual dual colors indicating that something wicked this way comes; the fruit-based pops have the familiar glassy complexion, but the creamier varieties defy identification.

The pops are denuded of their plastic shrouds and placed on a plate on the counter, where they are festooned with toppings designed to give the dish character, flavor and texture. A still-experimental watermelon/dragon fruit pop lies decorated and colored like a Christmas ornament – the red watermelon ice flecked with what appears to be tiny watermelon seeds, but turns out to be dragon fruit seeds. A rope of sweet, lime green honeydew and mint gel snakes its way across the top, with a litter of minute fresh mint leaves and watermelon-flavored Pop Rocks scattered conservatively across the top of the pop and the plate.  Just in time for Halloween and Thanksgiving, a rich and creamy pumpkin pop could be mistaken for a pie or tart were it not for the stick jutting out from the bottom. The pop gets its yellow-orange color from fresh pumpkin puree, while the greyish-brown bottom of the pop gets its color and crumbly consistency from Graham crackers and vanilla bean; after an application of dollops of whipped cream and sprinkled toffee, roasted pumpkin seeds, nutmeg, and cinnamon sugar, a drizzle of caramel crosses the plate. Creator Eugene Mar designs each pop that can be ordered off the board, but he’ll also customize them as the customer wishes (I had him apply a dusting of white bacon powder that might as well have been cocaine on my pumpkin pop). 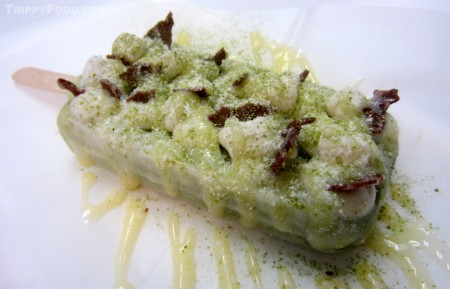 Also in the rich and creamy category, the lush and velvety milk green tea pop is delightful – coated with condensed milk and matcha green tea powder, the confection is finished with a layer of chewy mochi dots made in-house and crumbly red bean brittle that adds complexity and a variety of textures to the dish. The mango/strawberry pop with “pico de gallo” powder is reminiscent of Mexican paletas de mango con chile, but with hints of strawberry and fresh herbs; a Korean pear and blueberry pop is sweet and ultra-refreshing.

While a plethora of crafted ice cream parlors are creating Bill Nye ice cream in a nitrogen fog, Chef Mar is doing something unique and exciting, using molecular gastronomy in subtle and unique ways with what is certain to be a popular spin on an old-time favorite. In the sun-drenched hipster paradise of Southern California, the Ice Bar is keeping things cool.