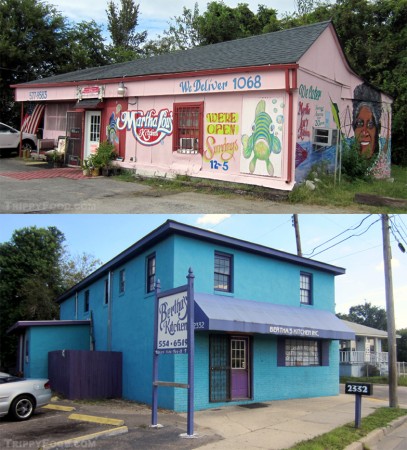 Ask the epicurean aristocracy for the quintessential Charleston dining destination and the names will roll off the tongue with head held high; you’ll undoubtedly be directed to fine establishments such as McCrady’s, Husk, Hominy Grill, Fig, and Two Boroughs Larder. But to taste the soul and heart of Charleston, eschew the valet parking, craft beers, and hipsters attached to their smartphone life support systems and enter a world that evokes the olfactory and gastronomic memories of a warm and happy home the likes of which you’ve never known. If you take issue with mismatched tables and chairs, Styrofoam dinnerware, and a casual atmosphere where you’ll be treated like a house guest, then by all means stay away – you will help speed up the lines that snake out the front door at lunch time. Two of Charleston’s tiny eateries vie for the title of ambassadors of gastronomic goodwill – Martha Lou’s Kitchen and her North Charleston neighbor, Bertha’s Kitchen. 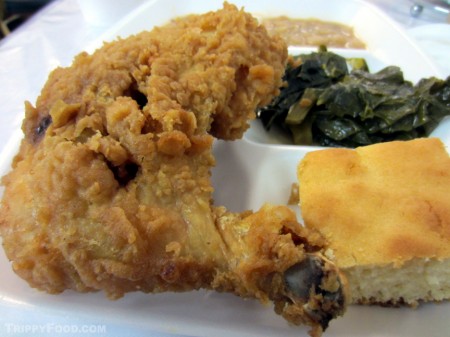 Fried chicken to die for

You can’t miss Martha Lou’s, a bright pink cube covered in homespun art and hand-painted signs.  Decor is an afterthought – although clean, you can forget looking for reclaimed tin ceilings and rough-hewn wood plank walls; Martha Lou’s Kitchen is essentially a cinderblock room with the kitchen tucked into an alcove at the end. On most days, the matriarch herself (Martha Lou Gadson) commands a seat by the door where she greets those on the way in; her daughter Debra dispenses niceties as she seats diners at tables equipped with a bottle of hot sauce and a roll of paper towels. If for some reason your table is missing the photocopied menu with the day’s offerings hand-written in Sharpie, you’ll have a few minutes to review – the atmosphere is outstandingly laid back. Don’t look for prices on the menu, and be sure you brought cash, as the only plastic you’ll use is the utensils. The meats are listed first; pick one and “two or three sides”. There’s no alcohol available, but you can quench your thirst with a sweet tea that competes with Debra’s smile. 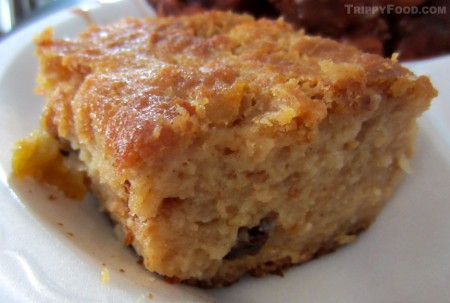 Martha Lou opened her kitchen at the tender young age of 53, having worked restaurants most of her life as well as cooking for a family of 8 (who goaded her into feeding the public back in 1983). The meat is all cooked to order; there are no heat lamps or steam trays keeping it alive, the kitchen activity taking place in plain view. A bite into the tender, juicy flesh of the fried chicken unleashes a wisp of mouth-singing steam while the exterior gives way with a firm, audible crunch – this is yard bird to die for. The slabs of flaky whitefish break away hard, each bite melting in a mouthful of joy that belies the high-quality fish used. The sides are equally erotic – the macaroni and cheese is blanketed in a beige sauce freckled with spice, creamy and crusty bits playing on the fork; the spicy okra soup is more like a stew with little bits of meat suspended in it, a hearty brew guaranteed to cut the Charleston cold; most likely, Martha Lou will have you sign her guestbook on the way out. 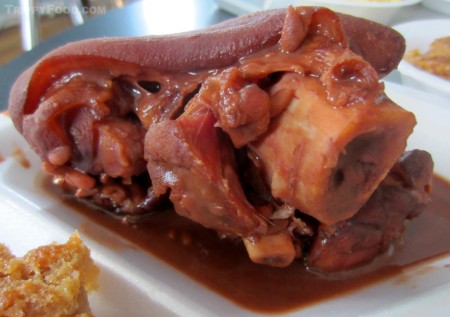 Bertha’s Kitchen stands on the outskirts of town in North Charleston; on most days around lunch time it’s not uncommon to see someone sizing up the line trailing out of the bright blue, two-story building to determine if they have ample time for lunch. Albertha Grant originally started serving Southern home cooking out of a motel back in 1979 – the operation is cafeteria-style; a whiteboard on an easel announces the day’s fare (although if you ask the right people you can get some of the unadvertised, off-menu specials). Although there’s more seating available than Martha Lou’s (including a loft on the second floor), the finished walled structure fills to capacity quickly. The sides are cooked in bulk and kept in steam trays behind the glassed-in counter with the meat items (with the exception of the slow-cooked treats) cooked on-demand. 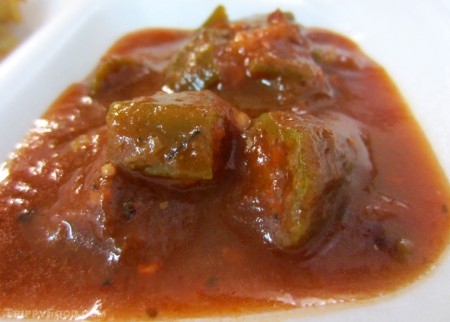 Since patrons order in line, you’d best decide what you want before you hit the counter or feel the eyes or the hungry masses burning into the back of your head; don’t worry about the kitchen crew – the late Albertha Grant’s family and other staff members exercise enormous patience. Unless you order off-menu or one of the specials, the concept is the same – meat and a couple of sides, and oh, that heavenly meat! Hamburger steak is not a hamburger – it is a savory meat cake sitting in a hot pool of gravy; the ham hocks are cooked down in a reddish, gritty broth. The dark brown skins are chewy without being leathery with a thin layer of fat flavoring the lining; the tender meat lurking below literally disintegrates off the bone. Bertha’s lima beans and rice make a wonderful bed to hold the meat and sop up the gravy, but you may want to use the crumbly, sturdy block of cornbread for mop-up detail (Martha Lou’s cornbread is lighter, almost cake-like). If you haven’t stuffed yourself stupid, save room for a generous chunk of moist bread pudding – both restaurants have a dessert with a sweet, dense texture, heavy with the tell-tale signs of finely chopped fruit cocktail.

If you visit Charleston and want to brag to your friends back home about the Michelin-starred bistros you made reservations for, by all means do so – you might want to keep Martha Lou’s and Bertha’s as a well-kept secret where your dreams of down-home Southern cooking become reality for under ten dollars.