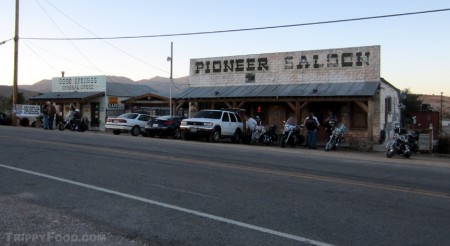 The setting sun paints the Bird Spring range a muted orange as a lone vulture circles overhead; the sedan pulls into the dirt parking area with the only audible sounds being earth crunching under the tires and the muted sound of a jukebox. As the music gets louder, you are conscious of your footsteps on the old, creaking boards on the porch. You enter through the side door, the bar lit by beer signs in a Christmassy neon glow – that’s when you notice the two bullet holes in the pressed-tin wall, an omen that these old walls may harbor some entities with unfinished business. 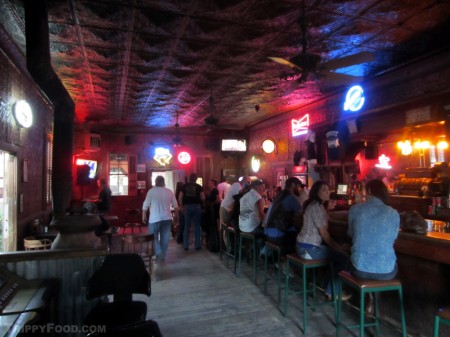 Pull up a stool, pardner

Trailer for a new Robert Rodriguez film? First paragraph of a Larry McMurtry novel? No, actually you’ve just entered Pioneer Saloon in Goodsprings, Nevada, a mere 30 miles from Las Vegas nestled at the foot of the dregs of an old lead mining town. Now entering its centenary, Clark County’s oldest watering hole is the first sign of life on the ramshackle, 7-mile road that veers of Interstate 15 in Jean. Having room enough to belly up to the bar is a crap shoot – on some week-ends, parking is at a premium and there’s the risk of the kitchen being closed as the food runs out. On a quiet night, current owner Noel Sheckells will happily recount the history of the saloon he purchased almost a decade ago from Don Hedrick with the stipulation that he preserve the original structure. Built by local businessman George Fayle in 1913, the original tin walls and ceilings (purchased from Sears and Roebucks) have weathered the century well in the dry desert conditions, and very few commodities have been added over the years – a pot-bellied stove still provides warmth on cold Nevada nights. 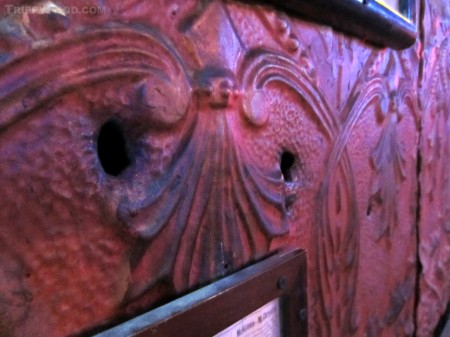 Holes from the bullets that killed Paul Coski

Over the years, the saloon has seen its share of tragedy and frontier ruckus, which has contributed to the Pioneer Saloon’s haunted reputation. Patrons and staff have seen the spectre of a benevolent prospector from the town’s boomtown mining days; card sharp Paul Coski also makes an occasional appearance (apparently not pleased with his fate of getting a lead transfusion while cheating at a game of poker – the bullet holes can still be seen in the wall to the courtyard). Pioneer Saloon also served as base of operations for the 1942 search and rescue mission to recover the wreckage of actress Carole Lombard’s plane from nearby Mount Potosi. A distraught and anxious Clark Gable spend several days in the saloon before receiving the bad news about Lombard’s demise; one room has been dedicated as the Carole Lombard and Clark Gable Memorial Room, its walls covered with news clippings and memorabilia about the couple and the fateful flight. 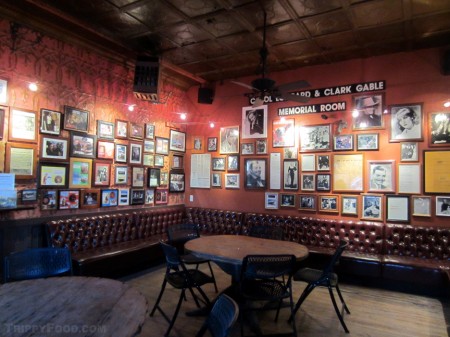 In recent times, the saloon has become a ghost hunting destination with an appearance on the Travel Channel program, Ghost Adventures. In addition to ghost-themed events, Pioneer Saloon occasionally hosts “lock-ins” where ticket holders can wet their whistle sealed in the bar overnight in an effort to catch a glimpse of Goodsprings’ otherworldly residents. The general store vends victuals to the dwindling townsfolk who call Goodsprings home; for comestibles, there’s a basic menu, and even on a slow night the cook or bartender will fire up the outdoor grill in the back and slap a beef patty on it for you. There are also several gas grills available for rent out back at the meager cost of $5 should you choose to grill your own (they’re often used for cook-offs and other culinary events that bring in the foodie contingency from nearby Las Vegas). 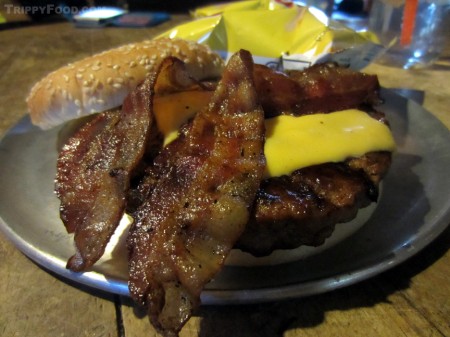 To celebrate their hundredth anniversary, Pioneer Saloon has erected a Centennial Wall on the east side of the tavern with the history of Goodsprings and its favorite watering hole. For a limited time, you can purchase a brick and space in their time capsule which will hold whatever you choose to fill a manila envelope with to be opened in 2113. Sure, you could guzzle a Mojito while blowing your paycheck at the Gold Strike Casino in Jean – but wouldn’t you rather rub elbows with the locals at the late 1800s Brunswick bar, knocking back a beer while the dusty wooden floor creaks beneath you? If you play your cards right, you’ll be able to tell the folks back home that your celebrity sighting on your Vegas vacation sported lead ventilation and a couple of aces up his sleeve.

GALLERY: See images of Val’s visit to the historic and haunted Pioneer Saloon in Goodsprings NV