The Happiest Place In South America 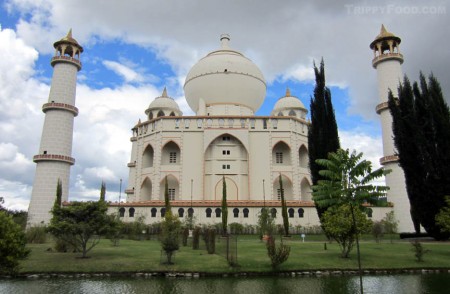 With world travelers like Anthony Bourdain touting the success of Colombia pulling itself up by its bootstraps to become a modern tourist destination, can the Andean paradise be far from gross commercial Americanization? While the influx of tío Sam’s favorite eateries represented by the likes of El Rey, El Payaso, El Coronel and La Sirena is beneficial to stimulating a flowering economy and putting the global image of a drug-funded war zone behind them, one can only hope that the lush land rich in resources doesn’t lose its identity in the global melting pot.  It comes as somewhat of a surprise that Colombia has managed to stave off colonization by The Mouse (Mickey Chigüiro doesn’t have that same familiar ring), especially when considering that in 1983, while Pablo Escobar’s heyday was in full swing, Jaime Duque Grisales quietly set aside a sizable tract of land in the Metropolitan Bogotá area to open a theme park of sorts that paid homage to Colombia’s culture, natural history and world presence. Colombian travelers on the ramshackle road between Bogotá and Zipaquirá no doubt recognize Parque Jaime Duque by the scale model Taj Majal that towers over the wall surrounding the park on one side and the giant condor making its permanent roost atop Edificio El Cóndor, the circular building that serves as the entrance to the park on the other side. 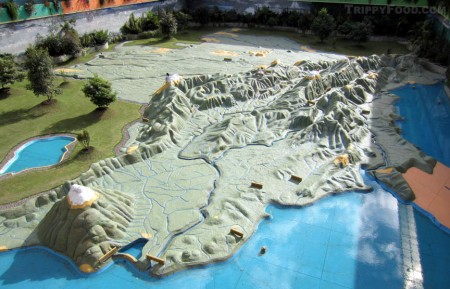 A topographical map of Colombia (note woman sweeping for scale)

Parque Jaime Duque is a mashup of Disneyland, Caesar’s Palace, South of the Border, and Claude Bell’s dinosaurs without the revisionist history, debauchery, racism and intelligent design present at the other bastions of roadside kitsch. The park has grown slowly over the years (its most prominent feature, the Taj Majal was added about ten years after it opened). The park’s founder was an aeronautical engineer and pilot, having served in World War II and serving as the first chief of Colombia’s national airline, Avianca; busts of Captain Jaime Duque Grisales can be found throughout the park (including under the rotunda dome at the entrance), and a 1946 Douglas DC-4 HK 136 flown by the man himself is mounted across the tiny lake from the replica of Mumtaz Mahal’s memorial. The Taj Majal model serves as more than a hollow prop – the bottom floor is a column-lined ballroom with a grand chandelier and furnished with replicas of famous works or art. A spiral staircase rises to two additional floors, one bearing a cyclorama depicting Colombia’s independence and the top floor featuring an exhibit entitled, “El Mundo del Doctor Ariel”, featuring a fictional scientist who has grown household insects to creatures of epic proportion and gloriously displayed in Fiberglas. 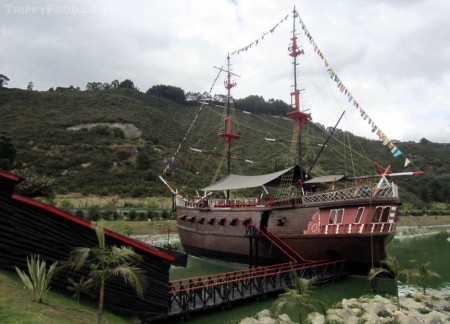 There are currently two aquatic vessels on display in a giant pool that on closer inspection is a “tiny” model of the Caribbean – on one side, a cement replica of the Brig Admiral Padilla (a 19th century warship); on the other, the Colombian Navy’s WWII-era destroyer ARC Cordoba (DT-15). If you’re not up for the brisk walk from the entrance to El Bioparque Wakatá (a preserve for seized animals that rivals many small zoos), you can take what looks like Parque Jaime Duque’s version of Thomas the Tank Engine meets Disneyland’s monorail to the giant thatched-roof hut that serves as el Restaurante Barbacoa Parque Jaime Duque. Among the Bioparque’s more notable residents are a hippopotamus father and son (the former of which was a member of Escobar’s menagerie), and a habitat where the denizens of a grassy enclosure were capybaras (known in Colombia’s finer asaderos as chigüiro), truly R.O.U.S.s. In the hills above El Bioparque Wakatá, Parque Jaime Duque captive raises the Andean condor (whose concrete family members perch around the park) in an effort to replenish the dwindling species in the wild. 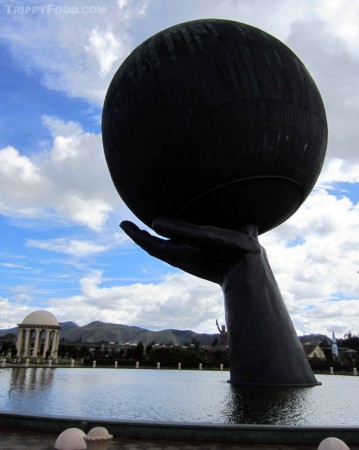 The oxidized Hand of God looks like a bowling trophy

The opposite end of the park could accurately be dubbed Fantasy Land; the most prominent structure is a massive metal sculpture dubbed “Monumento a Dios”. The hand of God rises from the ground holding a sphere which in the days before oxidation was a copper-clad globe with the land masses etched in; in its current state it resembles God’s bowling trophy. This stretch of park is rife with culture; the Mythological Fountain is lined with sculptures from Greek, Mesopotamian and other ancient cultures. In between the fountain and a courtyard featuring miniature models of the seven wonders of the ancient world (guarded by a 40-foot tall Colossus of Rhodes where entrance is gained by passing beneath the statue’s exposed genitalia) are several larger-than live, rather jovial looking dinosaurs. T-Rex is simply represented by a head with a gaping mouth that allows a photo opportunity, and a sharp-toothed apatosaurus that has a tunnel carved out of its innards featuring Cretaceous imagery. 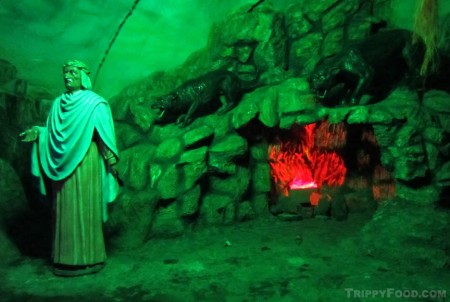 Don’t expect amusement park rides of Six Flags proportion; aside from the tram and your standard carnival attractions such as tea cups and bumper cars, there are two themed boat rides that put a different twist on Pirates of the Caribbean and It’s a Small World. The first is an aquatic indoor maze where rowboats navigate past still dioramas of One Thousand and One Nights, oddly scored with a traditional Andino soundtrack. One has to appreciate the ride’s honesty; the desire to remove your own throat while enduring that mundane repetitive song in Anaheim’s tribute to youth disappears when you wonder if they really needed to portray Ali Baba’s brother’s dismembered body in one of the tableaus. Next door, the kids will love the imagery of the 9 circles of Hell depicted in Dante’s Divine Comedy as demonstrated by the screaming youngster in the boat in front of us who was apparently unable to discern that the demons swooping down from the ceiling were in fact, fake. 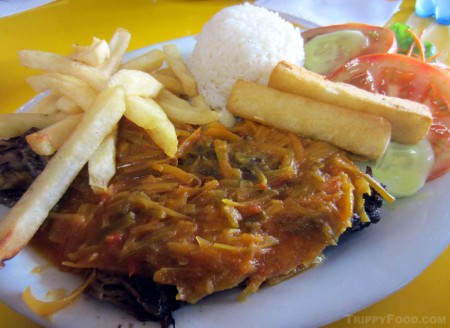 Sobrebarriga with fries AND rice

If you underestimate the amount of time you’ll spend in the park, a visit to Restaurante Bocatipicos is in order for a traditional Colombian lunch. Standard fare that we’ve come to know and love is available, including lomo de res, sobrebarriga, ajiaco, bandeja paisa and the curious side dish anomaly of plating rice together with French fries. The park occasionally features concerts by big-name international performers, and will soon be expanding, as they are leasing 7 acres to the Colombian Air Force to develop a Colombian Aerospace Museum.

For about $14 US, you can enjoy every nook and cranny of the sprawling theme park, a tiny fraction of the pesos you’ll drop visiting Walt in Southern California or Florida and may accidentally learn something about the wonderful people and culture of Colombia in the process; unfortunately you won’t be going home sporting capybara ears on top of your head.