I Believe I’ll Have Somoa 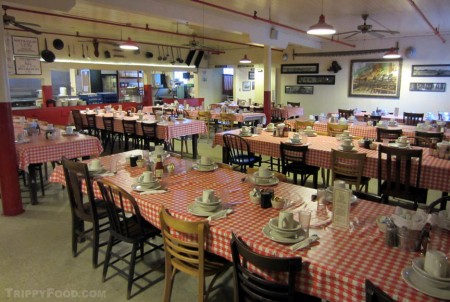 As the sun peeks its smiling face over the horizon, a clang of the bell and a call of “Come and get it” echoes over the channel into Arcata Bay, beckoning early risers to a hearty breakfast to sustain them during a grueling, back-breaking day at the saw mill. Burly and bearded sawyers, graders and edgers all make their way to their usual spot on the bench at the cookhouse for eggs, pancakes, bacon – whatever the single women employed in the kitchen happen to be serving this morning. Generous portions fill the plate, and when a mill worker has a real hunger, there’s plenty more where that came from. These days, the steam whistle screaming the end of the work day remains silent, and the once bustling cookhouse that nourished the employees of the Vance (and then Hammond) Lumber Company now feeds the dinner crowd that constitutes a night out for some of Samoa, California’s 300-odd citizens. 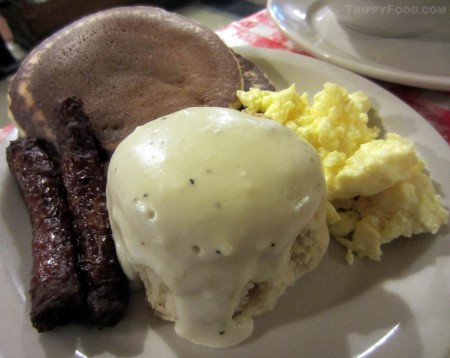 A breakfast plate fit for a lumberjack

The red, wooden-shingled canteen on a spit of land across the channel from Eureka has been serving breakfast, lunch and dinner since the 1890s for employees of the lumber company until going public in the 1960s. Red checked plastic tablecloths cover picnic tables that once were draped in linen, and meals are served communal (or family-style) just as they did when lumberjacks ruled the northern California redwood forests. A home-style breakfast will set you back a little more than a saw buck, and the staff ensures that your plate is only as empty as you want it. There’s no menu, just a grid on a white board that indicates how much you’ll pay based on your age (kids from 5 to 7 years old pay less than those between 8 and 11, and the wee ones under 4 eat free). On any given day, this might include pancakes, juice, scrambled eggs, sausage, biscuits with cream gravy, pancakes, and a cup of coffee. Unless you want to end up strapped to a circular saw, don’t ask to substitute.

If you’re one of the early birds that get there when the cookhouse opens at the crack of 7, you’ll probably encounter Jeff, who in addition to making sure you’re stuffed like a sack of sawdust will give you a history lesson about the mill, the cookhouse, and the lumber industry in the Eureka area. A tiny museum resides at the far end of the cookhouse featuring antique appliances from its heyday, as well as tools and images from the golden days of lumber, a fascinating and educational exhibit to peruse before setting off up Highway 101 to the Avenue of the Giants. If you happen to be there later in the morning, the adjacent Humboldt Bay Maritime Museum is worth a visit – it resides in what was formerly the head cook’s house, and was established in 1977. 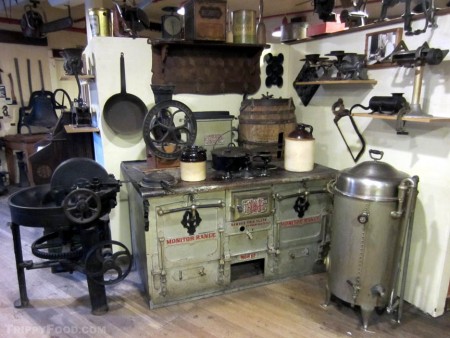 And those are just kitchen appliances

The last morning whistle sounded back in 1980, and although the mill days are a distant memory, road trippers on California’s scenic Route 101 can still enjoy the experience of a cookhouse meal. The only Beard Awards the line cooks might get nominated for is for bushiest or longest, but they’ll get you going with the energy you’ll need to square off with the axe against Paul Bunyan.

2 Responses to I Believe I’ll Have Somoa