I Went Down To The Crossroads 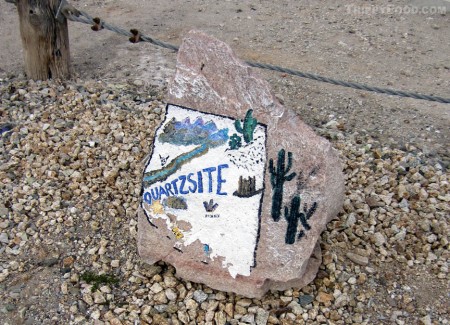 The official quartz map of Quartzsite

Picture a place where quirkiness is de rigueur and places like Portland, Oregon; South Austin, Texas; Las Vegas, Nevada; and Venice Beach in Los Angeles immediately come to mind, but the unsung bastion of cheerful insanity is undoubtedly the dry scrap of earth in the middle of nowhere and between everywhere, Quartzite, Arizona. For most of the year, this 36 square mile patch of desert at the intersection of Interstate 10 and Arizona Highway 95 is relatively quiet, but in January and February, over a million people descend on the self-proclaimed Rock Capital of the World for weeks of swap meets and the largest gathering of rock hounds in the United States. The city was founded in 1867 at what was then Fort Tyson and named for its most plentiful resource, quartz; the gems and minerals found in the area attract the bulk of Quartzsite’s visitors, but its strategic location between Yuma to the south, Parker to the north, Phoenix to the east, and Los Angeles to the west makes it a year-round oasis for truckers and RV enthusiasts. 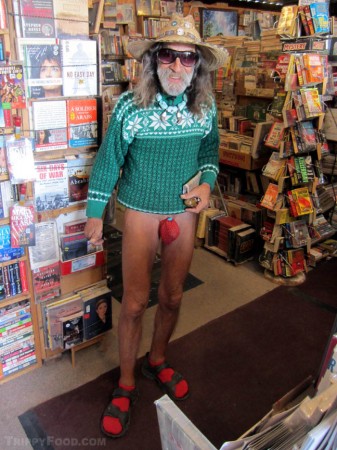 Summers in Quartzsite can be brutal, with Fahrenheit temperatures reaching as high as the 120s, but there’s still an ore car’s load of joyful lunacy to be found in the off season. One resident who is likely unfazed by the heat is the owner of Reader’s Oasis, the town’s bookstore on Main Street. Paul Winer (aka Sweet Pie, the Nude Boogie-woogie Pianist) dresses for work in little more than a “ball bag” and a pair of sandals, a trademark from his days as a musician in New England. In the 1960s and 70s, the Lynn, Massachusetts-born Winer played clubs throughout New England in his birthday suit, prompting the government to revoke clubs’ licenses when they couldn’t get him to cease and desist his nude pianist act. Winer made Quartzsite his home in 1972, and occasionally performs there in various stages of attire (with occasional gigs as far as New York City), but these days you can usually find him in the massive book store featuring many out-of-print and hard to find titles. Although you may catch him donning a sweater in the colder months, Winer is mostly au natural and will happily pose for pictures and share his life story with anyone who cares to listen. 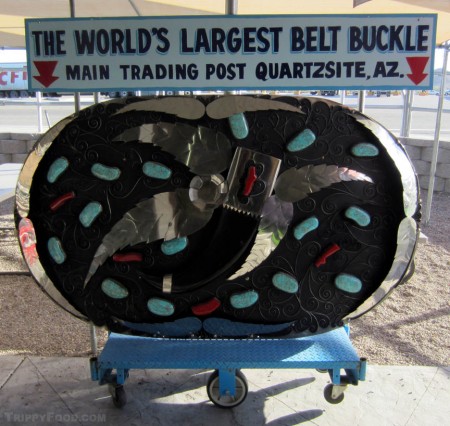 Many of the shops that sell gems, minerals and jewelry along Main Street are open year-round; Main Trading Post is a kitschy outlet that would make Elvis proud – a sign outside proclaims the world’s largest belt buckle on display inside. The belt buckle (adorned with turquoise, coral and silver) is approximately five feet wide and is wheeled around on a small cart; apparently Paul Bunyan decided not to pick up his order and left it for the store to proudly display at the entrance. Inside, a 7-foot tall grizzly bear stands decked-out like Texas rapper in turquoise jewelry, looking a little ragged at the edges from wear-and-tear. Shacks and stands are interspersed between the vendors selling everything from homemade root beer to fried cheese curds and western-style scones. One watering hole (constructed of two car ports surrounded by a cedar fence) honestly proclaims “Real Bad Beer, Food and Music – Enter at Your Own Risk”. Also not lacking a sense of humor, there isn’t a body of water closer to the Quartzsite Yacht Club motel than the Colorado River some 20 miles to the west. 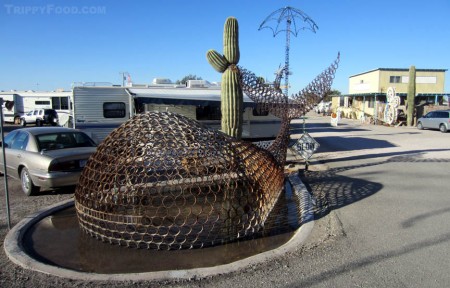 Even if you’re just passing through, as long as you’re on Main Street it’s worth a quick drive through Hassler’s RV Park, a dusty land that demonstrates what happens when you have a truckload of rebar, a blowtorch and too much time on your hands.  If the row of iron candy canes don’t catch your attention, what is most likely the world’s largest fishing rod will. While a colossal fish laden with not-so heavy metals dangles from the end of the line, a whale comprised of welded metal rings rusts in a tiny pond nearby; a veritable iron menagerie grazes from every patch of ground not occupied by camper or RV. 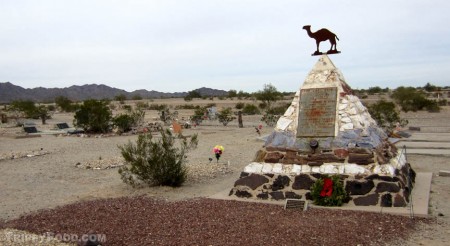 One of Quartzsite most celebrated citizens was Philip “Hi Jolly” Tedro, a Syrian-born camel driver who participated in the U.S. Calvary’s Camel Corp in 1857. After converting to Islam, Tedro changed his name to Hadji Ali, which was mangled by the locals as “Hi Jolly”, the name applied to a variety of places around town. After the failure of the U.S. Army to use camels for transportation, the animals were released into the desert where they became a familiar sight to miners for years; Tedro stayed in Quartzsite hauling freight, prospecting and acting as courier until his death in 1902. As a tribute to the colorful character, the Arizona Department of Transportation erected a quartz pyramid over his grave site in 1934, topped with an iron camel-shaped wind vane, now the main attraction at the burial ground now known as Hi Jolly Cemetery. 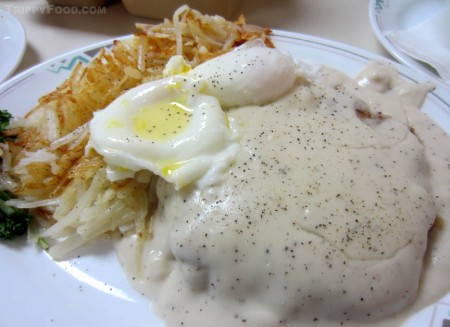 If all this lunacy has given you an appetite like a vulture waiting for something to die, skip the plethora of fast food establishments and “family” restaurants clustered along Main Street; the only thing besides water absent from the desert landscape is fine dining, but the old-school Mountain Quail Cafe on Moon Mountain Avenue serves up hearty, home-style cooking that will satiate you for your continuing journey to the four corners of the Southwest. The building and interior resembles a senior citizen recreation room, but don’t let that dissuade you from dining; the Mountain Quail Cafe serves up the meanest chicken-fried steak this side of the Rio Grande. The atmosphere is friendly – expect the wait staff to ask you to share the story of your personal journey through the crossroads of the golden west.

It will never be an alternate to that family Wally World vacation, spring break in Cancun, or your pilgrimage to see the world’s largest ball of twine in Cawker City, Kansas, but you’d be remiss to pass up the opportunity to experience the festive madness that makes Quartzsite a diamond in the rough.