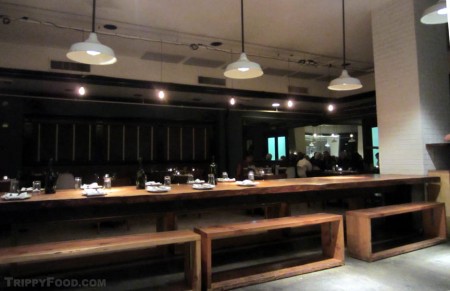 The belly of the beast and former set of “Knife Fight”

Since 2009, Angeleno foodies have braved a dodgy stretch of Downtown Los Angeles to experience Top Chef Ilan Hall’s gastropub, The Gorbals. In recent times, The Gorbals debuted a “sports bar” entrance on 5th Street, around the corner from the original entrance in the derelict lobby of the Alexandria Hotel; the belly of the beast remains the same, but patrons may miss the experience of feeling as though they’re navigating through the rough-and-tumble namesake Glasgow neighborhood Hall paid tribute to in commissioning his restaurant. Prior to opening a second restaurant in his native New York, Hall filmed the first two seasons of Esquire’s “Knife Fight” at The Gorbals, but since the show has migrated home to Brooklyn, the future of the Los Angeles flagship is in the wind. 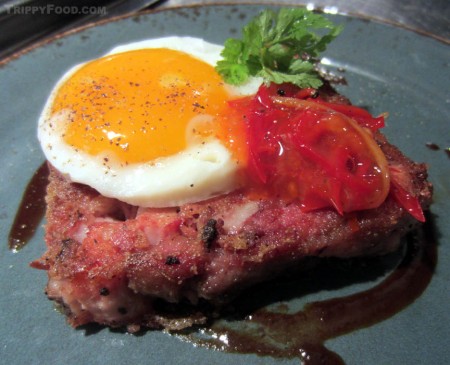 Recent reports have Hall closing The Gorbals in Los Angeles, with possible relocation in the works; although the restaurant has made improvements (like having their own bathroom rather than having to use the hotel’s sketchy facilities down a narrow tunnel in the basement), there have been numerous building issues to contend with over the past five years. If you haven’t been to The Gorbals in a while, I recommend a visit before possible gentrification and/or demise at the end of the year. Don’t be put off by the locked doors, covered windows, and signage advertising restaurant space for rent at the Spring Street entrance beneath the tattered banner; The Gorbals is still serving full-tilt boogie until a final decision is made. This may also be your last chance to enjoy the meaty gastropub fare, such as the pig’s head platter that put The Gorbals on the L.A. gastronomic roadmap. 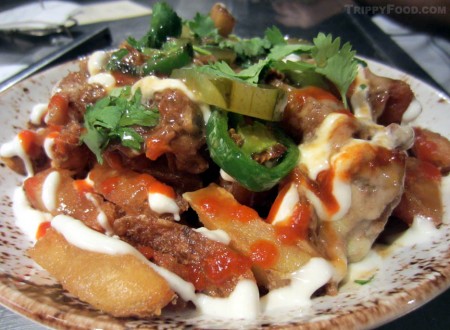 Chef in residence Peter Haller has amped up a few dishes and added a few new ones, although several dishes on the menu are “off the table” in terms of alteration; of these, the curiously-named “Bánh mì poutine” remains relatively the same. Unfortunately, the bánh mì poutine simply isn’t either; the dish is fresh, but more akin to something you’d have with a vegan beer on the sidewalk at a Whole Foods. There’s no squeaky cheese curds, no savory brown sauce (although to its credit, the hoisin sauce applied is at least the right color); on the Asian side, there’s no crusty, palate-chafing bread, no carrots, no cold cuts or head cheese. Ordering this item with the slightest expectation that it will somehow satisfy your craving for poutine or bánh mì will only result in abject disappointment, and even without the misnomer it’s bland at best; how it makes lists in Los Angeles where you can “eat poutine like a Canadian” is beyond me. 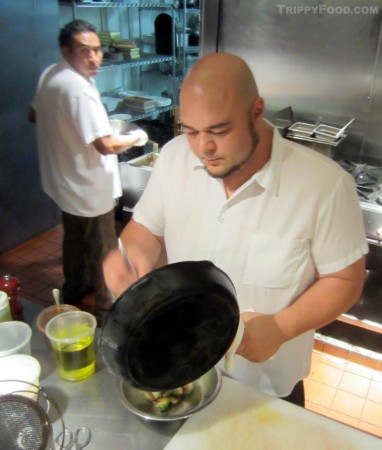 Since most of the patrons are a drinking crowd, a large portion of the menu follows the popular trend of smaller bar food (banchan, tapas, shareable plates, American dim sum – call it what you will, we’re talking about saucer-sized portions). If reports are true, and The Gorbals remains a fixture on the L.A. food scene, the menu will be noticeably greener – now is the time to sample Chef Haller’s artistry with animal flesh. One standout dish is Haller’s nod to his roots, a dish called “seared pig’s head” that bears some similarity to sisig. A slightly cooked, coarsely-ground pork patty dominates the plate, lovingly caressed by chiles and a calamansi marmalade and finished with a runny fried egg; the dish is nothing short of delicious. 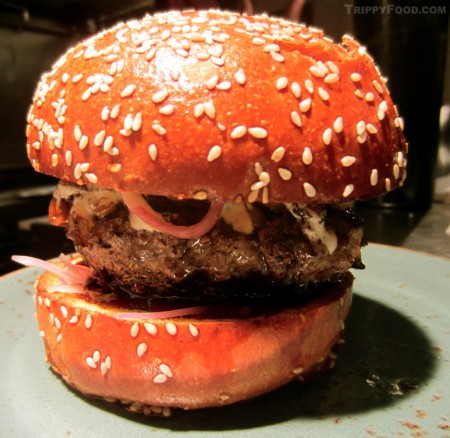 The revamped house burger is as tall as it is wide; the dry-aged meat actually expands as it cooks rather than cook down. This beef disk is one of the most popular items, and although the burger is topped with a blend of 7 preparations of onion, they all merge together on the palate. The Gorbals’ take on the popular Thai curry mussels is a welcome departure that succeeds where the bánh mì poutine fails – the dish is still traditional enough to live up to traditional expectations, yet subtly daring. In lieu of Chinese sausage, the bowl is punctuated with balls of “green chorizo” (made with green paprika); instead of potato, cubes of Korean pear impart sweetness while maintaining the texture of potato. The broth is delicious and worth ordering extra bread to sponge it up with. 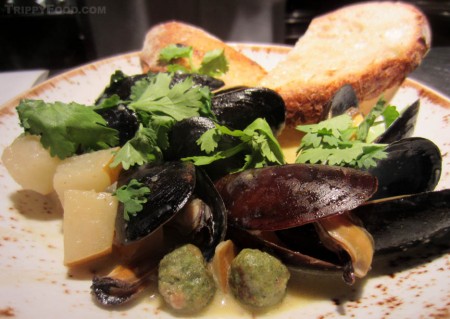 Haller is known for spectacular presentations, and the hamachi with Napa cabbage, nam chim, alligator pear, and shrimp chips is visually stunning. Also in the food art category, a roll of braised boneless lamb neck takes center stage on a platter conservatively populated with vegetables and sauce; lamb also features in a very green meatball dish. A picture-perfect duck confit latke is seared with duck fat, topped with duck skin chicharrón and dappled with dots of applesauce and sour cream. The perfect bar food, Chef Haller’s Armenian nachos were borne out of the necessity of feeding a large group on short notice; crispy leaves of lavash are accompanied by a mound of hummus with Havarti and vegetables.

It is unclear what the future holds for The Gorbals, but it’s an adventure that is currently worth undertaking, and you can be relatively certain you won’t encounter a Knife Fight (at least inside the restaurant).

NOTE: The cost for the food was provided by The Gorbals. The content provided in this article was not influenced whatsoever by the organizer of the event.