Portland’s food cart scene is as quirky as the city itself – it takes a special breed to command a trailer in the oft dark, damp clime of the Rose City. While many of Portland’s colorful characters are home grown, Bay Area transplant Jason “J Mo” Moreno worked virtually every restaurant position from front to back door up and down the west coast until he settled in Portland almost three years ago to open J Mo’s Sandwich Shack in a converted 1970’s camper. While his business card lists him as owner, chef and bad ass, Moreno has a vibrant sense of humor and treats customers as if they’ve just shown up at their Italian-American goombah’s pad in Passaic, New Jersey for dinner.  Moreno was out of commission for a while this past summer with a nasty broken leg, but is back with a vengeance – there are multiple stories about his accident, and while the truth isn’t bad, his back-up story is amazing. 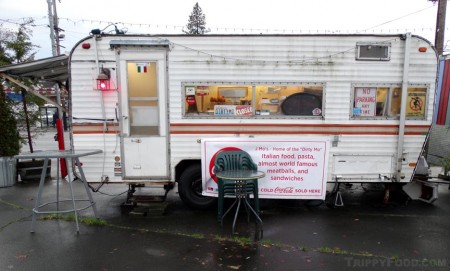 Like most carts in Portland, hours can be erratic, affected by weather and demand, and although their website lists closing hours from 3 PM to 9 PM, Moreno states that he’s stayed open late nights occasionally to service hungry patrons from the nearby strip clubs – if in doubt, a  phone call is in order. A dormant neon sign isn’t necessarily a sign that your quest for home-cooked Italian is for naught – on a recent wet Sunday afternoon I found a dry Moreno at the pod’s indoor beer garden, and although it was slow, he happily opened the shack and fired up the stove. J Mo’s vends a variety of sandwiches, including the classic Italian sub, and one of the most popular is a recently introduced chicken Parmesan, but the holy grail of sandwiches that put the shack on the map is the infamous Dirty Mo. 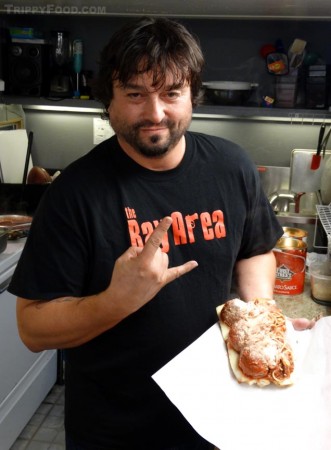 Calling the Dirty Mo a sandwich is case of semantics – this is a formidable Italian meal in a sub roll that is barely able to contain the ingredients, with the heap of old country comestibles spilling over the top like lava from Vesuvius. Moreno joined me in the shelter of the beer garden to watch in amusement as I calculated how I was going to address the matter at hand – while you might be able to wrap your mitts around the sandwich and attack it with jaw in full open position, logistics quickly requires the use of a knife and fork. Although it was unnecessary, Moreno apologized for the cue ball-sized meatballs in advance, lamenting that they were just cooked today (he generally likes to have them mellow at least a day in the zesty marinara), and having had lasagna heated up the second or even third day, perhaps even eaten cold out of the refrigerator, I knew exactly what he meant. 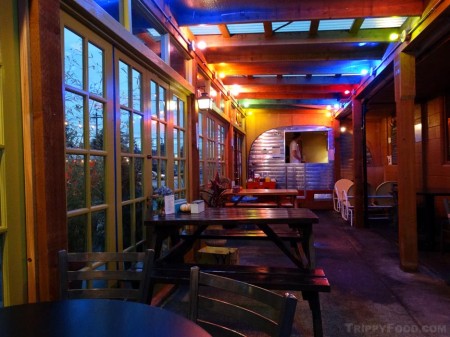 If you happen to be strolling up Foster Road while Moreno mans the stove, his cart is easy to find by the intoxicating cloud of garlic spilling out of the cart’s vents. Although the aroma hits you in the face like a wet sock, the sandwich doesn’t reek of it; Moreno has perfected the perfect balance of Italian spices throughout. Describing the Dirty Mo is an Italian meal in a sub roll is literal – a nest of al dente linguini (listed as spaghetti for the Medigans) rests atop sheets of Provolone and then capped with a row of massive, moist and meaty meatballs. There’s enough fresh basil to represent the tricolors without overpowering the sandwich; the whole shooting match is drenched in marinara and loosely held together by a garlicky fresh sub roll.  Even a gavone should skip breakfast before attempting to conquer the Dirty Mo, but don’t fret if you only get halfway through – imagine how good it’s going to taste tomorrow.

GALLERY: See images from Val’s visit to J Mo’s Sandwich Shack at the Carts on Foster food cart pod in Portland OR