The Meat On The Skewer Goes Round And Round 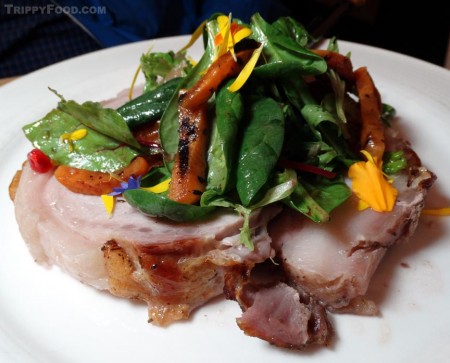 Describing the recently opened Status Kuo as status quo for its busy corner of Los Angeles’ Mar Vista neighborhood would be a gross misrepresentation – the name is a play on words for chef/owner David Kuo. The restaurant is being billed as a rotisserie, and should the silhouettes of meat animals on the sign perched high atop the roof be confusing, the various meats doing their slow, savory decadent dance on the skewers at the front of the restaurant will remove all doubt – Kuo’s business is meat, and business is good. With the cooking area in the open, the clean, lean and mean space is filled with the aroma of roasting meats, which seems to offset Kuo’s meek come-on for vegans to run the meat gauntlet and enjoy the menu as well. Although there are several plainly-marked vegan dishes on the menu, it hardly seems necessary as these superlative dishes can be enjoyed by vegans and omnivores alike. 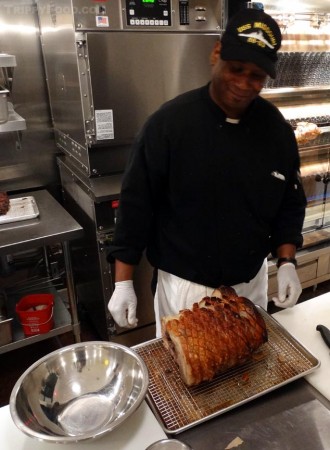 Sizing up rotisserie pork right off the spit

Most of the substantial plates arrive at the table with a vibrant salad strewn across the top; Kuo’s fresh salads feature root vegetables, seeds and edible flowers, but there’s no attempt to hide or disguise the ample portions of meat with vegetation. Thick slabs of rotisserie pork take up the better part of the dinner plate – the meat dissolves in your mouth and bursts with flavor; the chicken is consistently moist and savory. The coating on Status Kuo’s fried chicken has a pronounced crunch to it, creating a shell that seals the juices inside – oddly the color ranges from a golden brown to a dark chocolate color.

The pasta dishes are exemplary (albeit the firm al dente pasta may not be to everyone’s liking) – the oddly-named Taiwanese Sunday Gravy is richly flavored with chopped, braised pork, and a pocket of pickled mustard greens with a playful bite.  The vegan Donald Watson features firm, thick noodles with crispy slices of kabocha squash, chanterelles, and meaty cubes of sunchoke. 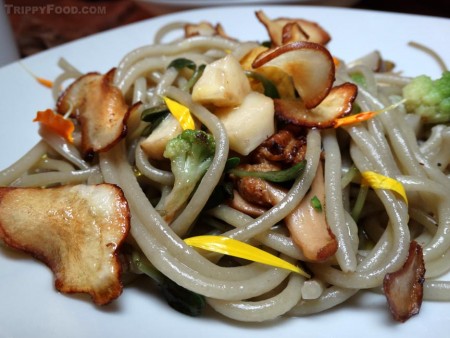 Vegan noodles with sunchoke and chanterelles

Thick sandwiches on airy ciabatta bread are satisfying – the lamb tri-tip makes subtle use of horseradish, with sassy arugula and caramelized onion. The BBQ jackfruit sandwich is a bit of an odd duck – the sandwich is loud and in your face with a lightly dressed slaw, but the unique flavor of the jackfruit gets muted from the profusion of tomatoey BBQ sauce.

For the time being the beverages are limited to house-made sodas, but it is advised to save room for coffee and one of Status Kuo’s hand-made fried pies with a cup of French press coffee. Although Status Kuo is vegan-friendly, recovering meataholics may be a bit uncomfortable with the mammalian imagery, but the fare is accessible to vegans and omnivores alike. There are plans to further develop the menu, but the restaurant could do worse than to maintain the status quo.

NOTE: The cost for the food was provided by Status Kuo. The content provided in this article was not influenced whatsoever by the organizer of the event.