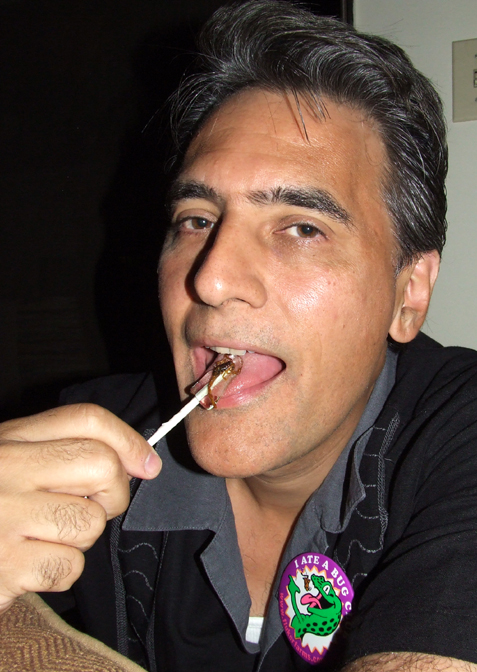 Nothing bugs me worse than offering someone a tasty insect snack, only to have them cry out in disgust before they even taste them. Throughout history, eating insects has not only been a means of survival (they are generally low in fat and high in protein), but also a rare, expensive or hard-to-find delicacy. Deciding what types of insects to eat and where to find them can be tricky business. Regardless of whether or not they are poisonous, insects found in the city are generally not a good snack choice, since they are besieged by pesticides and exposed to biological material of questionable origin or quality.

Before you hang your head in sorrow and call off your planned dumpster dive, rejoice! Edible insects can be easily purchased if you simply look around. I will briefly talk about the insects I mentioned previously but will share my culinary adventures with each in separate articles. Don’t go Roger Maris on that bee hive hanging from the neighbor’s tree; it will hurt a lot and I doubt you’ll be happy with the result. No doubt you’ve seen tequila with a maguey worm (actually a moth larva) in the bottle; in parts of Mexico, in the Oaxaca region, these are roasted and eaten without the tequila, a delicious and nutritious source of protein. The “worms” found in those tequila-flavored lollipops we all know and love are actually mealworms, the larva of the darkling beetle and staple for reptile pets across America. A co-worker had offered me a handful of BBQ flavored roasted mealworms, and after crunching down on them for a few moments, I decided that I would devour a bag of these little critters before I ever touch another Cheeto. They were crunchy and slightly salty, and would complement a nice oatmeal stout perfectly. Get out the credit card, I’m buying in bulk! 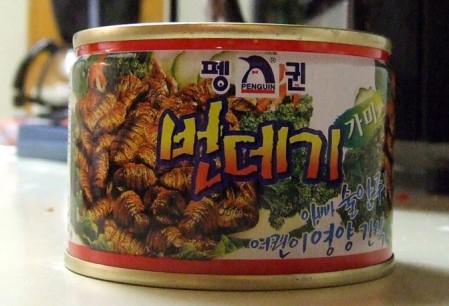 A can of silkworm pupae, or fish food, or bird feed - whatever.

The Colombian leaf cutter ants are hard to come by in this country, but these, too, would be an ideal bar snack. Their size makes them a little intimidating, but the taste is worth getting past the fear factor. For the squeamish, the ideal entry-level ant snack is chocolate covered ants. Surrounded by chocolate, they almost taste like raisins and are readily available on-line. Also available on-line and covered in chocolate are crickets. Fluker Farms specializes in raising insects for zoo animals and pets (predominately reptiles and amphibians), however they also sell individually wrapped chocolate covered crickets. In each plastic bag is a gold foil-wrapped piece of milk chocolate with an individual roasted cricket inside. Also in the bag is a button that lets everyone know you’ve joined the “I Ate a Bug Club” – be sure to wear it proudly. The crickets seem to lose their taste entombed in the chocolate, but the sensation of getting the tiny legs stuck in your teeth provides that jolt of reality. Since the cricket’s taste is muted, they’re pretty easy to eat, but personally I found the chocolate not to my liking. Perhaps they should give Godiva a ring and work something out. 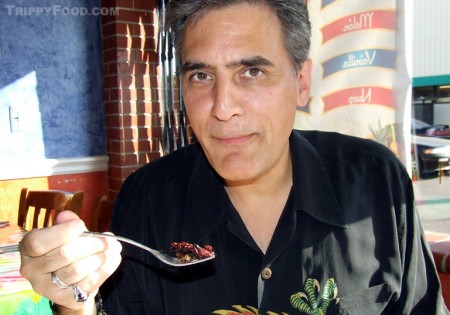 Just a forkful of grashoppers helps the Oaxacan go down

Scorpions and silkworm larvae can be scary food. Scorpions are readily available encased in lollipops like their slithering caterpillar nephews and available on line or at gift shops “out west”. I had to endure artificially green apple-flavored maltitol candy to get to the object of my affection – the little brown scorpion. Being a purist, I tried to get all the candy off the arachnid before savoring it. I can’t begin to tell you how difficult it is to suck all the candy off, leaving the scorpion intact. Despite my success, either the fake green apple flavor killed the taste of the scorpion it or was simply a tasteless crunchy center. At a Oaxacan restaurant I had scorpion mescal, which had scorpions floating in the bottom of the bottle. The drunken arthropods had a somewhat bitter taste, and I’m assuming the mescal did them no good at all. Silkworm larvae are another story completely, and so I’ll leave you to read through the drama of devouring these moth feti in the article devoted to them.

After desperately trying to find chapulines (grasshoppers) without having to fly to Oaxaca, Mexico, I finally found a restaurant that serves them up in generous quantities.  The taste is a world apart from crickets, but you’ll have to read the blog article for the full story. I’m always on the lookout for other insects to try, so if you hear of any, let me know what the buzz is all about.

GALLERY: See more of Val’s images of insects as food