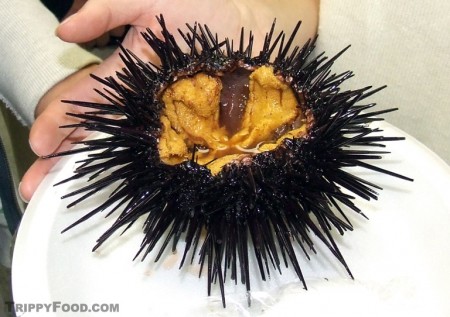 I’ve mentioned uni previously, but recently eating it from the animal that seconds before was a living creature demanded a separate article. Sushi lovers will easily recognize uni as the familiar and well-loved mustard-yellow strips of sea flesh, but very few would recognize the animal it is extracted from. Uni is derived from the sea urchin, a formidable creature that looks like an industrial pin cushion. It is often called the sea hedgehog because of its similarity to the loveable (but definitely not cuddly) mammal; in fact the scientific name of the sea urchin comes from the Latin word applied to the hedgehog, spiny anteater and several other similar looking spiked animals, and the name “urchin” is the hedgehog’s Old English name. Fortunately for the sea urchin it has a thick skin (actually an exoskeleton called the “test” covered with a multitude of spines), since when they were found off the coast of Maine during colonial days they were referred to as “whores’ eggs”. Anyone who has endured a painful encounter with the animal (usually as a result of stepping on one in shallow water) can recognize one immediately. Not all sea urchins are edible; the green, short-spined variety off the Atlantic coast of the U.S is, as well as several varieties in the Pacific. Like frog legs and stone crab, only a small part of the animal is eaten – the female sexual organs. Sushi bars usually carry it previously extracted, but if you’re lucky and can find a place that will dispatch the creature on-site, you are in for a fresh treat. 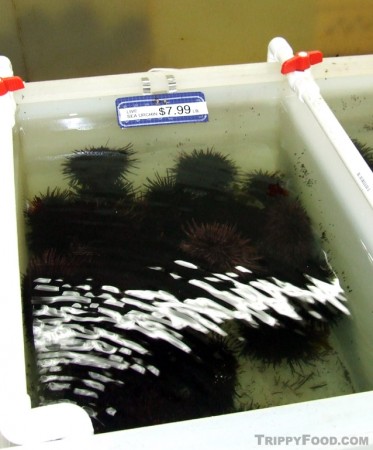 Tanks of live sea urchins (note the suckers on the side)

Just such a place can be found in Redondo Beach, California. Quality Seafood has been located on the pier for over 40 years offering a variety of live seafood, most of which they will steam or fry for you at the time of purchase. At the end of a long row of tanks containing an incredible variety of shellfish (including blue, Dungeness and spider crab, a plethora of different oyster species, periwinkles, steamer clams and quahogs and mussels) are two plastic tanks filled with live purple-black sea urchins. The tank has what appears to be miniscule black leeches attached to the side; I asked what they were and discovered that the sea urchin has hundreds of tiny sucker feet on the bottom (similar to starfish), some of which stay attached when the urchins get pulled off the surface. On a recent visit with Deep End Dining‘s Eddie Lin, Quality Seafood was doing a brisk business serving the sea urchin. The staff fishing them out of the tank didn’t seem intimidated by the urchin’s weaponry; in fact, our server was tossing it slightly in his ungloved hand like a softball. I assumed the spines weren’t sharp, but he confided that he’s had to work many a broken-off needle out of his hand. The urchin also appeared to stain our server’s hands with its dark color, which can take multiple hand washings to remove. 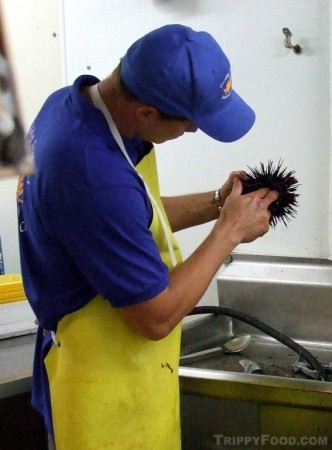 Picking out the urchin nasty bits

Unless you know what you’re doing, I would advise against cracking open one of these bad boys at home. Our server turned the urchin on its back, exposing the flat bottom where the mouth is located and methodically delivered several sharp, glancing blows in a circle around the bottom with a heavy flat metal spoon. I was a little surprised that he wasn’t wearing protective eyewear since urchin spine shrapnel was flying around in tiny shards. Once he had made his way all the way around, he flipped the urchin over and the bottom popped out in his hand, connected to a gooey mess of urchin guts. He then deftly removed any non-uni soft bits and shell fragments with his fingers and presented it on a Styrofoam plate as a spiky calcium bowl with the five ovaries lining the inside like a star. I felt a little strange scooping the creamy, luscious organs out with a plastic spoon, but when it Redondo Beach, do as the Redondoans do. It was a little unsettling seeing the spines move a little after the urchin was served, but it was easier to handle than the “live” lobster sashimi that seemed to ask if I was enjoying my meal. As for the taste, it was slightly saltier than sushi-grade uni, but it dissolved on the tongue like fresh, cool sea butter with a taste like sunset over a jetty on a cool evening. 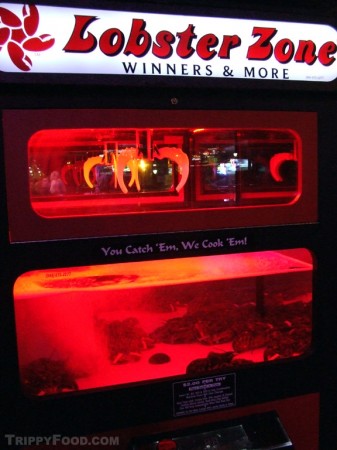 After the live uni bowl, a walk around the pier was in order. One gift shop advertised itself as the “home of the great white shark exhibit”, but $1.50 to check out whatever was in the closet-sized room guarded by a pirate mannequin didn’t seem like much of a bang for the buck. A better waste of $2.00 can be found at a bar near Quality Seafood; near the tiny stage is a claw machine (like the ones at the arcade where you can win a stuffed Buzz Lightyear). Before you shrug this off as a diversion worthy of Chuck E. Cheese, consider the machine’s name:  Lobster Zone. That’s right, the lucky sucker who plunks down his $2 maneuvers the claw over a tank of live Maine lobsters, which the staff will graciously cook for you if you can manage to hang on to the unwary crustacean long enough to get him into the awaiting maw of the Lobster Zone’s hopper. We actually snagged two lobsters that looked to be about a pound and a half each, but they didn’t like the idea of being taken up by the mothership and managed to gyrate their way free. I’m willing to bet it has a higher entertainment value than the great white shark exhibit.

Eating recently live sea urchin is not for the squeamish; you might want to start off slow with uni sushi at your friendly neighborhood sushi bar, but when you’re ready for the full tilt boogie fresh taste of the sea hedgehog it’s worth every bite. I don’t mind telling you, I’m on pins and needles anticipating my next serving.