Eat, Drink And Be Merry 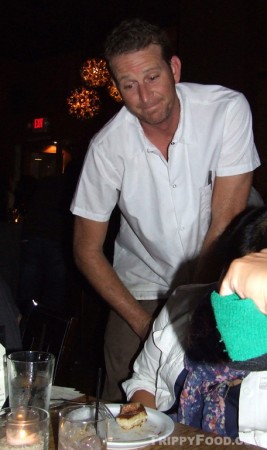 Chef CJ Jacobson describes one of the dishes

Dean Vernon Wormer once advised, “Fat, drunk and stupid is no way to go through life”, but if you have made this your personal goal, then stagger over to The Yard in Santa Monica. Top Chef participant Chef Chris “CJ” Jacobson has recently launched a late night menu that quietly mumbles, “I’m drunk and I need some alcohol-absorbing carbs”; unfortunately, a great deal of it is wasted on the wasted. If you show up stone-cold sober, don’t fret – The Yard’s high-octane drinks will take you from zero to stupid faster than you can touch your nose with your outstretched finger. As soon as I cleared the doorway at the media and “foodie” event, I was asked if I cared for a drink. Fruit drinks were plentiful, and I liked the sound of the Blood Orange Fizz (the name, not the fizz) and so I ordered one, watching the bartender pulverize a wedge of blood orange in the bottom of a glass with a pestle. In order to ensure that the orange was dead, she drowned it with multiple streams of liquids (I lost count, but there had to be six or seven) most of which I’m willing to bet contained enough alcohol to warrant a finger-wagging from the Surgeon General. My first sip confirmed this – I actually saw her put the orange in, but somehow all I could taste was alcohol. 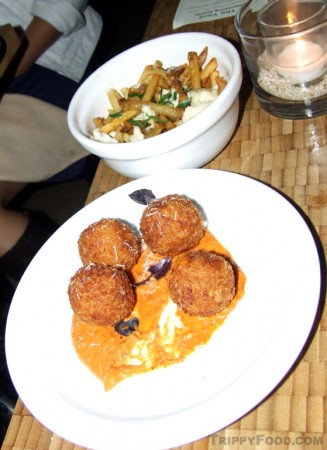 Being the lightweight that I am, my brain was doing acrobatics when the food began arriving. The portions are perfect for booze hounds and barflies – no anxiety over whether you’re going to be painting Officer Krupke’s shoes in the wee hours of the morning. The first tidbits to arrive were the pulled pork sloppy joe sliders, which tasted remarkably like their ground beef cousins but with the unmistakable savory tang of the pork. These were garnished with pickled carrots but there wasn’t enough to affect the taste. Although the mini-sandwiches were tasty, I was pacing myself since the hits just kept on coming. The next item to arrive was the grilled cheese sandwiches. I will sleep soundly at night if grilled cheese sandwiches disappear of the face of the earth – they’ve become so much of an “in” thing that I’m waiting for Baskin-Robbins to start hawking grilled cheese ice cream. I took a reluctant bite, and as hard as I tried to hate it, I couldn’t – the outside was grilled dark and crispy without the soggy and greasy mess that too frequently accompanies the sandwich. The guts were simply cheese, with no meat, onions, tomato or other substance to take away from the flavor; and oh, what flavor. Gruyere, mozzarella, asiago and bleu cheeses were blended to where they ceased to exist individually and morphed into an “uber-cheese”. The Gruyere and mozz were the most prevalent, but the bleu subtly brought up the rear – I decided that this is the last grilled cheese I’ll eat so I can remember the dish with fond memories. 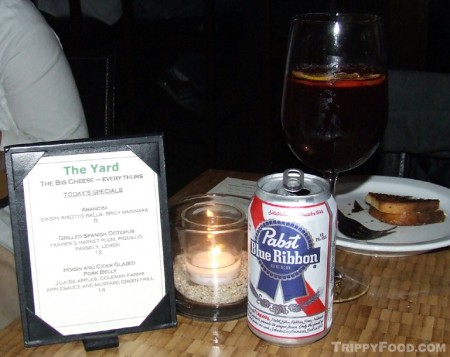 Yes, that is MY Pabst Blue Ribbon

Although we had a very attentive waitperson, Chef Jacobson himself slung many of the dishes out. Sadly, he made an effort to describe the dishes and their ingredients, but being halfway through my Pabst Blue Ribbon in the crowded and noisy bar his oratory sounded like the teacher on the Charlie Brown cartoons.  A nicely plated row of veal meatballs sprinkled with raisins and walnuts appeared next – I couldn’t detect much (if any) grain filler in them, and they were moist, hot and delicious. These were followed by some starchy fried risotto balls (crispy on the outside, creamy on the inside) and a dish of mini-poutine. I can’t fault them for trying to be creative with the poutine (they used shoestring potatoes that almost tasted like French’s potato sticks and a thinner brown sauce), but my heart will always be with the more traditional Montreal-style presentation. A plate of paprika-dusted calamari arrived which looked deceptively spicy; the mollusk was lightly battered and golden brown without much taste from added ingredients. Some of the dishes showed up for return engagements, and when the grilled cheese made its rounds again, I commented that at least we weren’t besieged by its evil twin, macaroni and cheese. I really have to learn to shut my pie hole and stop tempting fate, as immediately after the words left my lips a casserole dish filled with said mac and cheese arrived at the table. At least this version was somewhat of a departure – there was a crumbly crust on the top, and the dish was made with shells and king crab (although I think it may have been prince crab since its royal presence was somewhat scarce).

With a menu of dishes engineered to go easy on a stomach filled with booze, The Yard offers a creative late-night alternative to In-N-Out, but if you find yourself ordering any of the menu items from their drive-up window, you may have had a bit too much to drink and should probably move your vehicle off the sidewalk as quickly and quietly as possible.

2 Responses to Eat, Drink And Be Merry