A Reputation At Steak 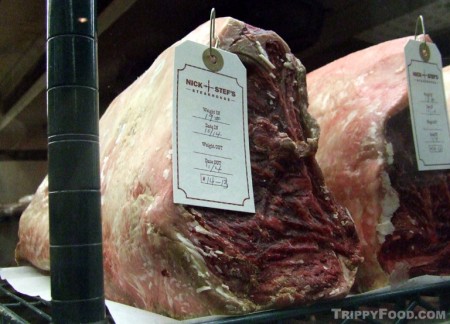 Nick and Stef’s Steakhouse has a commanding presence in several major cities in the U.S, so being invited to an exclusive media dinner to showcase the talents of their new executive chef (Megan Logan) was, as the Italian olive oil magnate once said, an offer I couldn’t refuse. From the outside, the only thing that gives it away as a restaurant is the patio seating; the sleek, modern decor seems so at home in the office tower surroundings that I was wondering if I was in the right place as I walked through the marble lobby of the elevators leading to the garage. Everything on the menu that evening was specifically crafted for the media dinner, from the original cocktail creations through the Lilliputian desert sampler. There were three drink offerings to get things started – not one to compare traditional libations, I turned down their Courvoisier Sidecar to opt for the Hidden Agenda, a concoction of Partida Tequila, blackberries and egg whites (they had me at egg whites). The drink tasted like a drunken parfait, and I couldn’t help dunking the blackberries that straddled the glass, impaled by a hatpin. After sampling bites of filet mignon steak tartare on olive crostini, yellowfin ahi on fried wontons and tiny spoons of braised short rib that tasted somewhat like chorizo, we were taken back to a very large square table where we sat like one big, happy family. 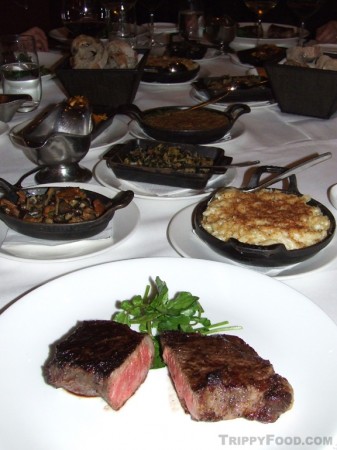 The first course was a single adorable little Kusshi oyster scantily clad in a light mignonette gelée and cradled in its shell, perched on a tiny mound of volcanic salt. With the salt under the shell, I wasn’t sure if it was supposed to impart any flavor to the oyster, but the little guy didn’t really need any help. The only thing I wanted after polishing off the shellfish was another oyster. As with every other course, the oyster was paired with an alcoholic beverage, in this case a Russian River Valley sparkling wine (I wanted to use words like “delightful” and “vibrant” but lost interest while thinking about another oyster). The oyster was followed by a somewhat-green but beet-heavy salad featuring a suggestion of Gorgonzola cheese and toasted and split hazelnuts that looked like the Mexican jumping beans you used to be able to get in those clear plastic boxes. Naturally, this was also paired with wine (a nice Sauvignon Blanc). 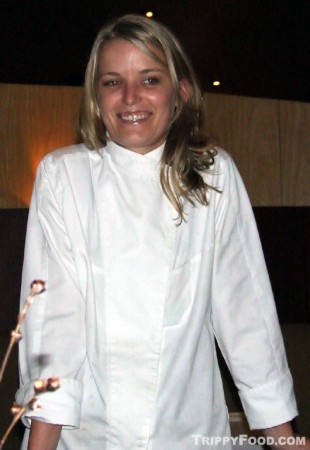 With the preliminaries out of the way, things heated up with a pan-seared scallop drizzled with a Romanesco and cauliflower sauce, almonds, grapes and raisins. The scallop itself was the most perfectly cooked of any I’ve ever had – lightly seared on the outside, with the inside finding the perfect balance between raw and overcooked, so perfect that I could easily ignore any of the rest of the presentation. By the way, did I mention that it was paired with a wine? “Shocking!” you say, but I soldiered on and had a few sips of the Chilean Chardonnay. I was feeling a bit guilty about not drinking all the alcohol they placed in front of me, but I feared that if I finished the only thing I’d be tasting would be whatever happened to fall on the floor beneath the table. All these little dishes were wonderfully flavorful, but what’s a steakhouse without steak? Nick and Stef’s features a veritable meatquarium – a thick glass, climate-controlled room where the meat is dry aged – it looked like a beef morgue, the hefty slabs on meat on display with their toe tags prominently announcing time of death. The dinner was a carnivore’s delight as they brought out not one, but two hot, mouth-watering cuts – a rib eye and a New York strip steak that tasted like they came from different animals. I can’t tell if it was the dry aging, the preparation or the quality of the Angus beef, but I traded off bites to determine my favorite (the rib eye won) until there wasn’t a meat scrap left. Four sauces were provided in double-spouted gravy boats, but my favorite was an exceptionally spicy chimichurri; I used it sparingly as not to obscure the steak’s natural flavor. Naturally, the beef was paired with wine, this time a Cabernet Sauvignon. The meat course also came with a variety of family-style sides including greens lightly sautéed with bacon, a dip-like creamed spinach, a ragout of chanterelle honshimeji and maitake mushrooms, and a dish of cubed, roasted squash that still had some firmness and the added texture of toasted squash seeds. Did I forget mac and cheese? I tried to… the foodies who find macaroni and cheese a comfort food seemed to enjoy it, but I think it and grilled cheese have had their 15 minutes of fame. I half expected to see the mac and cheese paired with a nice chilled 2010 Night Train with the cap gently and lovingly unscrewed to allow it to breathe properly. 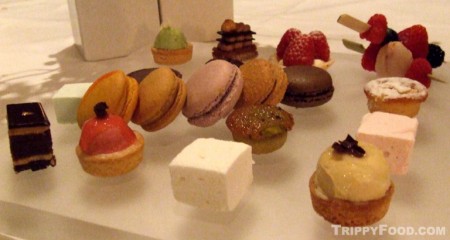 A walk through the land of tiny desserts

For the final course, each diner was presented with a cheese board featuring a small sample of 2 aged, sharp cheddars (one of which took honors in a British competition) and a smooth blue cheese from Spain without the typical pungent nose. Each of the wee cheeses were paired with a shot of beer, ranging from light to dark, and ironically my favorites were the Hook’s 10-year cheddar and Anderson Valley Brewing’s Boont Amber Ale (the California beer entry). Once the dinner plates were whisked away, an array of tiny desserts were presented that looked like museum miniatures, and I took a liking to the tartlet with pastry cream, a miniscule pastry that ended the meal where it began – with raspberries. Nick and Stef’s is about to launch a new menu, so even though I was honored to partake in the dinner, I couldn’t help feeling bad about describing something that most patrons won’t be able to experience. Although there were a wide variety of dishes that showed off Chef Logan’s culinary skills, I left satisfied but not overstuffed since each item presented was in small bite-sized portions. A meal like the one I enjoyed is a rare find, and Chef Logan’s artistic medium of choice (small bites of colorful food) was incredibly well done.