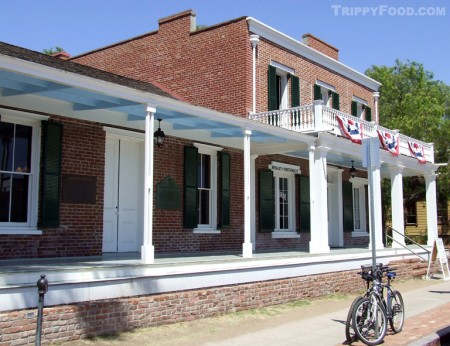 San Diego is not usually the first place that pops into mind when considering haunted places in the U.S. Typical spooky destinations usually include Alcatraz; Gettysburg Cemetery; San Jose’s Winchester Mystery House; Salem, Massachusetts; New Orleans; Charleston, South Carolina; and Fall River, Massachusetts’ Lizzie Borden House, but you would be remiss to overlook several haunted locations in San Diego, California, including one included in almost every “most haunted” top 10 list – The Whaley House. The house was built specifically for Thomas Whaley and completed in August of 1857 at a cost of $10,000 (a small fortune in those days, especially in the fledgling location now known as Old Town). Whaley was a New York businessman who had spent a considerable amount of time traveling back and forth between New York, San Francisco, and San Diego, settling in the latter permanently after marrying in New York. The house was unusual for San Diego in that it was crafted from brick (which were manufactured in the San Diego brickyard Whaley owned). The building housed San Diego’s first theater (located in an upstairs bedroom and able to accommodate 150 people); during 1869 the county of San Diego leased a small courtroom for $65 dollars a month; adjacent to the courtroom was the Whaley and Crosthwaite General Store (all of which have been restored and can be seen today). Even before the house was built it may have been marked for otherworldly occupation due to its location – it was adjacent to a Native American Kumeyaay (or Kumiai) settlement, and many of the tribe who died from disease and interaction with the Europeans overflowed the church cemetery and may have been buried on the property. The plot of land where the house stands was also used as the town gallows where James “Yankee Jim” Robinson was hanged in 1852 after being tried for grand larceny; according to local reports, Robinson was too tall for the noose resulting in a hanging that lasted over an hour. Local newspaper accounts reported that the Whaleys encountered heavy footsteps in the home and attributed them to “Yankee Jim”, which essentially means that the home was haunted while the Whaleys were living there.

The county courtroom inside the Whaley House

The Whaleys welcomed a son (Thomas Jr.) in 1856, although he died in the house of scarlet fever at the tender young age of 18 months. The death of their son, coupled with a fire in their wooden store prompted them to reconsider San Diego and move to San Francisco. Twelve years later Whaley made repairs to the home and brought the family back to San Diego to live. Death was becoming a regular visitor at the site; the theater’s operator (Tanner Troupe) died 17 days after the theatre opened. As one story goes, a girl who had been strangled on a clothesline while running down a hill was brought into the kitchen and died on the kitchen table. In 1882, their daughter Violet married George T. Bertolacci, but the marriage ended in divorce; suffering from depression, she committed suicide in the house with her father’s gun in 1885. After Violet’s death, the Whaleys moved into a house they built on State Street and never returned. The brick home fell into disrepair, but was restored by son Francis in 1909 as a tourist attraction; it opened officially as a museum in 1960 and officially designated as haunted by the United States Commerce Department. Visitors to the Whaley house today have reported seeing or hearing the presence of Yankee Jim, little Thomas and even the family terrier. Docents maintain a sense of humor about the site; on my visit, one of the tour guides asked, “Do you know how that crack appeared in that mirror?” and after a moment of puzzled silence revealed that they broke it while moving it. The woman selling tickets downstairs said that while an episode of “Most Haunted” was being filmed, the crew was “staging” sightings upstairs with their fancy equipment while real paranormal activity was occurring downstairs. 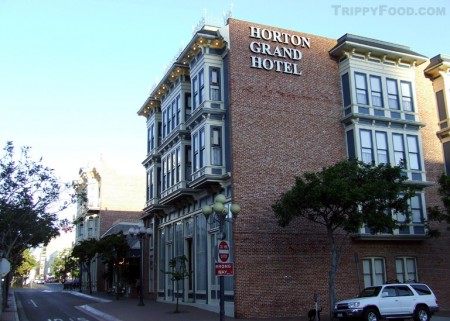 The entrance to the Horton Grand Hotel

Another of San Diego’s haunted dwellings is the current Horton Grand Hotel, located just off the Gaslamp District (the former Stingaree, or red-light district) and relocated at the same spot as a famous local bordello that stood at that site at the turn of the last century. The huge brick Italianate Victorian building is actually the architectural merging of two hotels, both formerly located in different locations. The Grand Horton Hotel was built in 1886 at the cost of over $200,000 by architects Comstock and Trotsche in the style of the famous Innsbruck Inn in Vienna, Austria; the other, less fancy hotel (also built in 1886) was originally called the Brooklyn Hotel, but after the Kahle Saddlery Shop moved into the ground floor it was renamed the Brooklyn Kahle Saddlery Hotel. It was in The Brooklyn Kahle Saddlery Hotel that Wyatt Earp spent most of most of his years while living in San Diego. By 1970 both structures had fallen into disrepair and were slated for demolition to make way for the new Horton Plaza (itself a haunted location, for reasons we’ll cover shortly). A developer offered to buy the two buildings and relocate them, taking on the arduous task of removing and cataloguing each brick. Both hotels were reassembled as a single structure in 1986 (one hundred years after their original construction dates). Another building and house of ill repute (formerly known as the Anita and Regal Hotels) on the property was incorporated into the design, creating 24 additional suites that were opened to the public in 1990. The original oak staircase from the Grand Horton was shipped to Austria for restoration; it now serves as access to the rooms on the second floor. Just below the staircase is a paper mache horse that served as the saddle shop’s mascot; he now guards the former saddlery in the location where it once stood. The rooms are furnished with antiques, with flat-panel televisions built into a wall cabinet to maintain the Victorian look and feel of each room. There have been multiple encounters with specters at the new location, most attributed to the ghost of a man named Roger Whittaker (no, not the guy who sang “The Last Farewell”). There are two stories about the sad tale of said Mr. Whittaker; the first involves him being shot and killed by the father of his true-love, after which his lifeless corpse is dumped unceremoniously into a swamp which later turned out to be the present site of the hotel. The second, more fun and plausible story involves a cheating gambler caught in the act; after fleeing the game, he ended up at his hotel where he hid in the armoire in Room 309 – his pursuers caught up with him and shot him through the armoire’s door. In either case, guests of room 309 have been disturbed by shaking beds and armoire doors that fly open, and guests have felt his presence in the hallway. Other accounts attribute ghostly visits to Madam Ida Bailey, who hosted the brothel previously at that location. Although President Benjamin Harrison, fighters Jack Dempsey and Joe Louis, baseball legend Babe Ruth, and the aforementioned Wyatt Earp were once residents of the hotels in their previous incarnation, guests have not reported visits by any dignitaries. 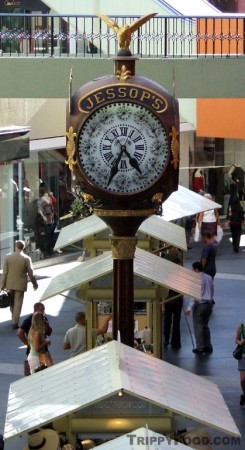 I mentioned the hotels being relocated to make way for Horton Plaza, a sprawling shopping mega-center, but the new Horton Plaza has a haunted link with the past. On the main concourse of the bottom level is a grand Victorian clock with the name “Jessop’s” emblazoned across the top in gold leaf. It was moved from its original location in the front of Jessop and Sons’ jewelry store on 5th Avenue to Horton Plaza in 1984. The outdoor pendulum clock was commissioned by local jeweler Joseph Jessop and built by employee Claude D. Ledger in 1907. There are 21 dials on four faces indicating time in various places around the world; the clock is 22 feet tall with its movement electrically wound every eight hours. A fine story about a magnificent timepiece, to be sure, but what does any of it have to do with haunted locations? It has been documented that on the day Ledger (the clock’s creator) died, the clock stopped working. After careful troubleshooting, no reason could be found for the clock’s stoppage – it was rewound and continued to keep accurate time through 2009. The clock was refurbished, cleaned, repainted and had new gold leaf applied at a cost of over $25,000. The repairs were performed by the Jessop family, who still owns and maintains the clock – after the overhaul, the clock was restarted publicly by 98-year-old David Jessop Jr., great-grandson of Joseph Jessop in November of 2009, 102 years after its debut.

There are other places in and around San Diego reputed to be haunted including the 1913 St. James Hotel (now a Ramada hotel) and nearby Hotel del Coronado; I’m sure the graveyard of the oldest of the California missions, Mission Basilica San Diego de Alcala, is a creepy place to spend a dark Halloween night and a location with stories to tell. We have a morbid fascination with visits from the great beyond, and there’s plenty to see that will satisfy even the most timid paranormal investigator; enjoy your ghost hunt, and hopefully the scariest thing you will encounter will be the Taco Bell trying to pass its food off as Mexican cuisine.

Hear “The Last Farewell” by Roger Whittaker (the singer, not the ghost)