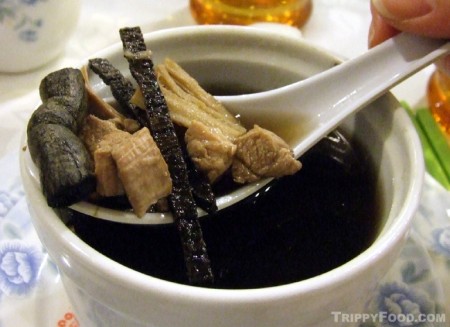 Bull penis and other unidentified objects

I suppose before we get started I’ll preface this article with a warning to children, librarians and members of the clergy – I will be using the word “penis”. Repeatedly. Before you get the impression that you’ve stumbled upon a “Val Does Dallas” website, said penis was the business end of a male ox. Avid followers of this blog know that this isn’t my first foray into penile cuisine – my first experience experimenting with the pork sword (technically, the beef sword) was in phở at Pho Nguyen Hue in Westminster, California. Always the adventurer, I also had a mouthful of Eddie Lin’s bacon-wrapped johnson (not HIS personally) at a BizarreBQ last year. While trying to find an interesting dish to invite some bloggers and friends to try, the aforementioned Mr. Lin informed me that Chef Lupe Liang at the trippy Hop Woo in Chinatown whipped up a mean pot of bull penis soup, and so the game was afoot (and a penis). Initially the meal was going to be a one man play, with the penis soup giving the Tony award-winning performance of a lifetime, but it turns out that Chef Liang had a few tricks up his sleeve. What Chef Liang had planned was essentially an aphrodisiac dinner, with some food designed for other health benefits as well, the perfect feast for our dinner guests: Vivianne Lapointe of LIVE F>A>S>T Magazine, Arianna Armstrong of GrapeSmart, Food Truck Times and other food, wine and social sites, and The Minty, the eponymous host of a site covering food, drink and dating. 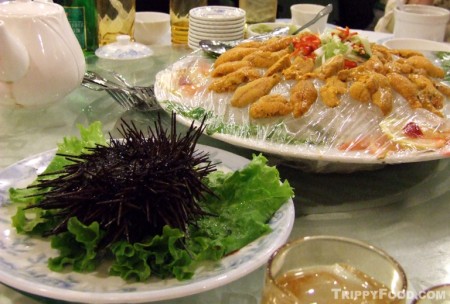 A live sea urchin pays homage to its dead family

The first course (the penis soup) was brought out in individual covered soup tureens, leaving our imaginations to run wild while Chef Liang described the dish and its benefits in Chinese; I didn’t need a translator to get the general idea of what the soup was reputed to do as I caught his inflections and hand gestures. I momentarily envisioned opening the lid and having a bovine jack-in-the-box moment, but as in other preparations, the moo tool was finely sliced. I had to put on my journalistic game face overhearing Eddie ask Chef Liang how well he cleans his penis, while trying to size up the soup. The broth was a brown-black color and had a strong aroma of spices and herbs. One dip of the spoon brought up a collection of objects including things that looked like plant roots and twigs, with the diner having to find Waldo in the mix. Bull penis is more about texture than taste, but the broth imparted a nice flavor. Between the gristle-like pieces and the fatty component, I favored the latter although some of the other diners found it to be “slimy”. 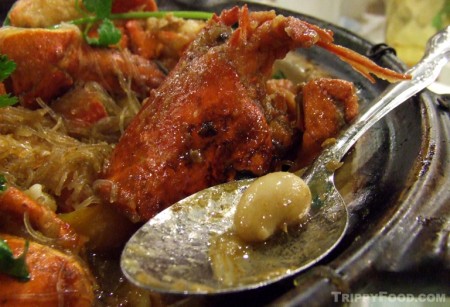 The spoon holds a future generation of roosters

After slurping down the hot penis (did I really just say that?), the chef brought out a live sea urchin that was spared the axe so that we could see the living creature accompanied by a dish of ice with close to 100 uni hanging off the plate like Leonardo DiCaprio on his makeshift Titanic raft. Uni is known as an aphrodisiac for several reasons: for starters, they are (and most assuredly look like) the female gonads of the sea urchin. In addition, uni is said to produce anandamide, a compound that stimulates the human dopamine system. Each diner was given a small dish with a wasabi/soy sauce blend with uno of the uni ceremoniously plopped into the brackish bath, but after eating the first marinated sac we simply started plucking them from the mound. After making short work of the unit a steaming crock of lobster segments were brought out accompanied by vegetables and garnished with cilantro and what looked like garlic. Upon closer inspection, the garlic turned out to be what the locals call “rooster fries” (the rooster’s calling cards that put the “hen” in “hentai”). I had enjoyed “chicken nuts” in hot pot previously and noted that they usually formed a larger pair, but I’m guessing these were the by-product of emasculation for capon creation. The taste was unmistakable: a little like a cross between a light liverwurst and egg white with a high fluidity. The thing that was odd was the combination of the lobster and cock balls in the same dish, a double-dose of well publicized aphrodisiacs. 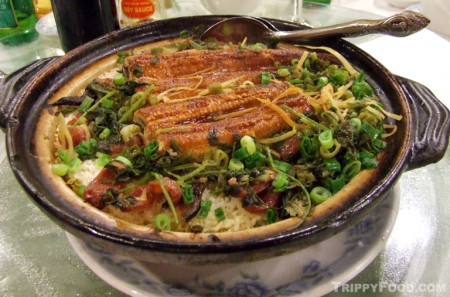 The next dish was a pot of eel rice, complete with a variety of greens, wispy noodles and chunks of bacony pork. The eel sat almost whole on the top of the rice and were removed to a separate plate for distribution – they were moist, flavorful and unencumbered by the standard dousing of brown sauce. Eel is said to promote good eyesight and brain function so it may not be a good dish to have on a blind or first date. Chef Liang presented his omnipresent deer meat with leeks and star melon, mellow, meaty and sure to perk up your circulation (and we all know how important blood flow improvement is for an aphrodisiac); it also cures that acne that’s preventing you from finding Mr. or Ms. Right (or so I am told). The cold and refreshing greens with cellophane noodles and goji berries pleased the vegetarians in the group but also provided a nice diversion from the meat-laden meal. A cold steamed chicken dish with greens, seaweed and peppers seemed somewhat out of place at an aphrodisiac dinner, but I can’t argue that it’s always nice to bring your date back down the earth once you’ve scared the bejeezus out of them with a gonad chow-down. As with most of the elaborate feasts at Hop Woo, the dinner was capped with a bowl of medicinal digestive soup, rich and murky but not unpleasant – the fun part of having the soup is playing Guess the Ingredients, a game that everyone at the table seems to lose to the house every time. 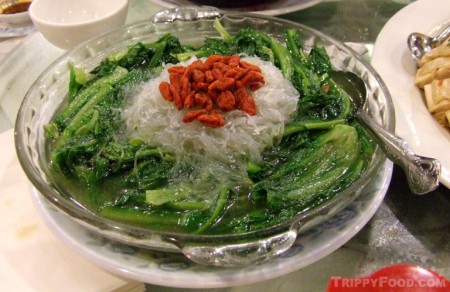 A plate designed to show off the goji berries