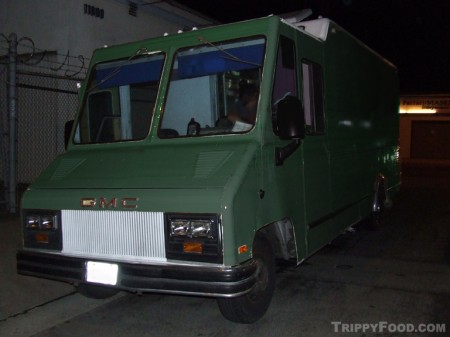 The Green Soylent Machine in a rare moment of visibility

Ever since Kogi tweeted their first location, the plethora of Los Angeles County’s gourmet food trucks followed suit, so it’s odd to find a food truck that is relying solely on word of mouth. The brand-spanking new Green Soylent Machine is doing just that; in fact, they don’t even inform their customer base where they’ll show up next. I recently caught up with them on North Mission Road at Daly Street near the campus of USC Health Sciences Center and barely had time to speak with them before they were off to their next stop. Since there are no printed menus (or signage of any kind), you either need to ask what they’re serving or trust the chef.

Owner/Chef Al Packer learned his trade while serving as the personal chef to the Old Christians Club rugby team in Uruguay; he states that in those days, you pretty much had to throw together whatever was lying about to keep a young rugby team fed. Packer’s specialty is an odd meat patty that truly embodies the spirit of mystery meat – the animal of choice appears to be somewhat of a secret. Packer states that he sources his meat locally, and although he doesn’t specify the ranch, he says that he has access to an inexpensive, sustainable and almost unlimited supply.

The truck’s namesake Soylent Green patty tastes mostly like pork liver – it is made from a pate that is made with a Chianti reduction and then oddly blended with a fava bean puree that gives the patty its green color (obviously the perfect choice for St. Patrick’s Day. It is coarser in texture than anything similar I’ve had, and I imagine this is due to mixing other ground cuts of meat. The truck has a few additional offerings, including a rather odd-tasting donner kebab and something that tasted like beef jerky served over a tiny bed of shaved ice.

Sadly I was unable to get many pictures as Packer requests the food be eaten at the truck where he quickly disposes of any leftovers and trash. I’m not sure it makes good business sense to not advertise location or mark the truck where people can find it, but Packer seems to be living for the moment, stating that he’s only in it for the personal satisfaction and doesn’t know how long he expects to keep the business running. If you see the truck in your neighborhood it’s worth giving a try, otherwise you may have to wait to see if he’ll try you.

2 Responses to To Serve Man