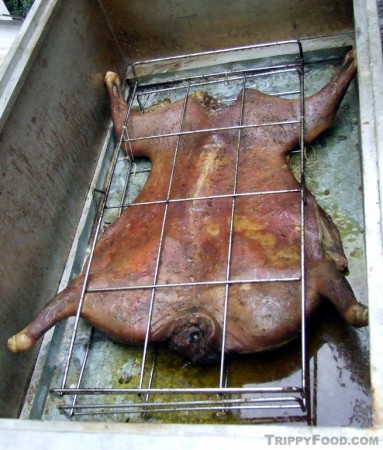 The U.S. has some catching up to do when it comes to enjoying the most popular meat on the planet – goat. Perhaps it’s their reputation as being surly beasts, or the legend of being a manifestation of Satan, but one thing is for certain, even Capricorns are missing the boat when it comes to this lean, flavorful red meat. The newest Tender Greens restaurant on Sunset Boulevard in Hollywood recently hosted a private party where a whole goat was to be put to the coals in a wooden Cuban-style La Caja China roasting box; since the event was also billed as a Beer Garden Kick-Off, I imagined the event as a twisted Irish funeral where the coffin held the delicious remains of The Pet Goat. There’s a certain amount of irony about a goat roast at a restaurant called “Tender Greens”, but Chef Eric Hulme knows his way around cooking the beast. Preparation started several days prior with Chef Hulme giving the decapitated and gutted animal the deluxe spa treatment which included a rub down and injections of a tangy, mustard-yellow marinade made with fresh garlic, shallots, olive oil, rosemary, thyme, oregano, Meyer lemon, paprika, salt and pepper. On game day, the goat was sandwiched between two wire racks and placed inside the metal-lined casket of fire; the charcoal on top radiated the heat down to evenly cook the goat, but the wind threatened to be uncooperative. Hedging his bets, Chef Hulme also hung a second goat in an indoor smoker that looked like a small, stainless-steel safe as well as grilling local white sea bass for the occasion. 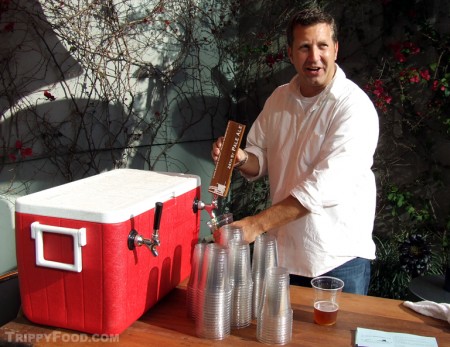 While the goatmaster tended to this hellish box, attendees were treated to 24th Street Pale Ale on tap from a Coleman cooler. Tending bar was Strand Brewing Company’s Vice President, Rich Marcello, and not only is he the vice president – he’s also the salesman and delivery guy. Multiple hats are a requirement when you work for a company with 2 employees (I assume the other is the president); Strand Brewing specializes in small batch, hand-crafted ales and currently only sells to restaurants and bars. The beer packed a 6.1 percent wallop with a nice citrusy aroma and tang – a nice sipping ale. It was a beer lover’s paradise, as Chef Hulme also had on hand nondescript brown bottles of his home-brewed Dirty Blond Pale Ale, a lighter offering than the 24th Street Pale Ale, yet still tasty.

The beerfest continued and a variety of artistic-looking side dishes were brought out – these included a fresh, crunchy black barley salad with garlic, spring greens and onion; tender grilled asparagus with roasted shallots and blanketed with parmesan shavings; salted and roasted potatoes that were billed as “new” but seemed more like “fetal”, each one a flavorful bite and no more; braised artichokes accompanied by grilled Meyer lemon and tossed with oregano; a simple, cold kale dish; and a salad of baby greens with snap peas, tangerines, olives, and radish slices. The side dish that blew me away was Chef Rian Brandenburg’s fava bean puree; it was presented surrounded by crostini as a mound of what looked like guacamole, but tasted like its polar opposite. Chef Brandenburg blanched the beans and mixed them with olive oil, garlic and crumbles of feta cheese and the result tasted like a green pea hummus. 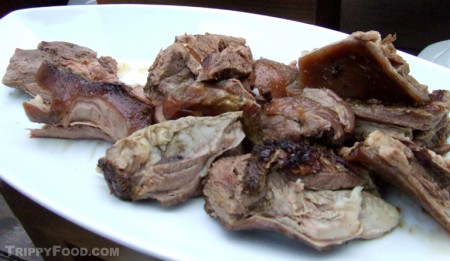 Chunks of goat meat from the roasting box

To keep the wolves at bay, the smoked goat was carved inside and brought out first and although the typically-lean meat was hung vertically in the smoker (allowing the fats and juice to drip down to the bottom); the result was still moist and tender. By contrast, the goat roasted in the box was firmer, but with a chewier skin (unfortunately the lean goat doesn’t crisp up into chicharron the way lechon (pig) does when cooked in the same box). Goat has a variety of textures and flavors depending on the geography of where it was carved from, and some people find it to be “gamey”, but both animals had a mild taste, perked up by the marinade. A pot of rich French pressed coffee complemented the two deserts featured – a nibble-sized creamy strawberry rhubarb tart and a sweet blood orange pastry bar that gave a nod to apple crumble. The roomy patio was a comfortable place to enjoy the meal under umbrella-shaded tables and fenced off by a massive wall of bamboo. Similar events are planned that will feature whole roasted lamb and pig, and on the familiar corner of Sunset and Vine in Hollywood it’s bound to get the neighboring restaurants’ goat and make them green with envy.

GALLERY: See images of Val’s experience at a roast goat dinner at Tender Greens in Hollywood

6 Responses to What’s Eatin’ You, Kid?