Rooms With A Vu 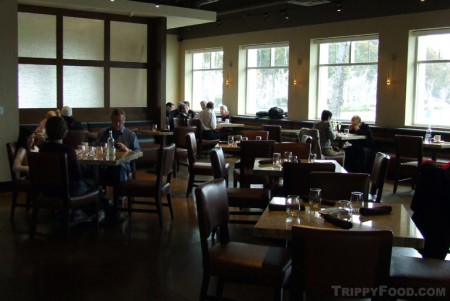 The open and airy dining area at Vū Restaurant

I’m not ashamed to admit the amount of times I’ve been enticed to visit a restaurant that touts its scenic or spectacular views, only to be disappointed by the underwhelming and overpriced food (I will elaborate on some of these places off-line, as I don’t like to waste bandwidth on them). Vū Restaurant is located on a sheltered cove in Marina Del Rey at the back of the Jamaica Bay Inn, and its website advertises “inspired cuisine and breathtaking views”, so I was somewhat apprehensive accepting a media event “do-over” to sample their brunch menu. On the Sunday morning I visited, the Los Angeles area was experiencing what some locals refer to as “the storm of the century”, which meant that gazing at the lagoon with its palm trees bending in the sideways-blowing rain was going to put the focus squarely on the food. I had heard about Vū’s foray into the world of molecular gastronomy, and although I love an adventure, I was curious to see how well science class and Sunday brunch were going to get along. The restaurant itself is full of clean lines – square granite tabletops, big cubed windows and a smattering of art (mostly in the form of sculpture) with plenty of open space; the only fabric I could see was my own napkin. When the waiter brought out water in what looked like a prop whiskey bottle, it was clear that the showcase was going to be the cuisine – I was certainly not going to be distracted at this brunch by logos, labels or Bob Ross paintings on the wall. 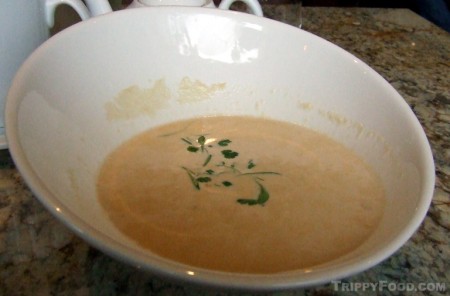 Rich green curry soup, but the bowl makes me dizzy

I opened with the green curry soup, just what the doctor ordered to take the chill out of the air. Tiny pieces of cilantro were artfully arranged on the surface, and I almost dreaded wreaking havoc on that image with my spoon. My first spoonful dredged up tiny shelled mussels which were sweet and tender with the unusual addition of coconut boba balls that added a pleasantly odd texture and taste. The creamy, spicy and sweet broth was so good that it was still enjoyable once the mussels and boba were gone. 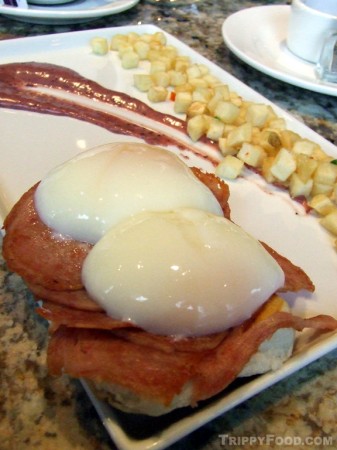 Globes of joy - slow cooked eggs on the Kona Benedict

Many of the dishes on the brunch menu featured “slow cooked eggs”; Executive Chef Kyle Schutte explained that these were their specialty – the hen fruit are cooked in their shells at 63 degrees for half an hour so that the whites coagulate to just past translucent but just short of opaque and the yolk takes on a creamy consistency. One of the egg dishes is deceptively listed as “bacon and eggs” with the bacon substituted by pork belly that is cooked sous vide confit with maple, and then finally fried creating a crispy skin and a non-gelatinous fatty component. I was so intrigued I ordered the “bacon” sans eggs; the taste was sweet, yet not strong-armed by the maple. The egg dish that caught my eye and dove straight into my comfort zone was the Kona Benedict, a Hawaiian-inspired take on the classic Eggs Benedict. Grilled, thinly shaved sheets of SPAM blanketed halved Hawaiian sweet rolls and were crowned with the shimmering orbs of slow cooked eggs. The hollandaise was streaked across the plate like skid marks, and the purple color betrayed flavoring with pureed hibiscus flower; a row of tiny cubed “home fries” lined one side of the plate which was crisp and tasty. The dish screamed of island umami-ness with the sweet rolls complementing the salty SPAM, both drowning in the egg (which was somewhere in the realm between poached and soft-boiled). 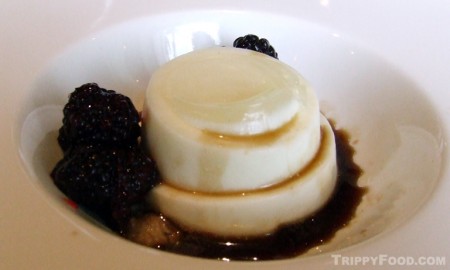 I decided to finish with the buttermilk panna cotta, which featured Vū’s version of “Dippin’ Dots” (Coca-Cola frozen into little pellets using liquid nitrogen) and blackberries fizzed in a carbonator using carbon dioxide. The panna cotta was set in a mold that made it look like a little white pudding Devo hat, but unfortunately the frozen Coke didn’t make it to the table – all but one sphere had already melted prior to arrival which was unfortunate for the presentation, but not the taste. The melted Coke syrup mixed with the juice from the blackberries made a nice sauce to accent the creamy panna cotta and the one remaining pellet went directly to the tongue, creating a tiny cold burn. I paired the dessert with a cup of the Santa Barbara Dark Tropic Blend Coffee which was strong, with a heady aroma, but neither bitter nor burnt. I thought I detected Kona in the blend, but the waiter wasn’t familiar with exactly which beans were blended.

Chef Schutte made a name for himself in North Carolina with daring techniques, and his influence on the cuisine at Vū is a pleasant treat. After speaking with me at my table, he visited another where he actually cleared away the diner’s plates. At Vū, you can choose to gaze out at the marina, take in the neat simplicity of the restaurant and bar areas, or marvel at the artistry of the cuisine, but one thing is for certain – there will always be a view.

2 Responses to Rooms With A Vu