It’s Only A Model

Camelot truck
Formerly somewhere on the road in the U.S. 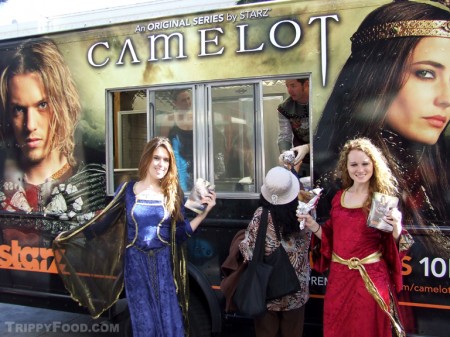 The Knights of the Round Table may eat ham and jam and SPAM a lot, but a pared-down food truck hauling a bevy of lords and ladies in medieval garb has supplying the common folk with free roasted turkey legs to promote the new television series, “Camelot” on Starz. I’m sure by now that you have visions of medieval food orgies dancing around in your head, an age gone by when corpulent lords of Holly Wood lounged on resplendent concrete and gnawed on the succulent, savory walking appendage of the Meleagris gallopavo. Although the roasted (or smoked) turkey leg is an obligatory staple of Renaissance festivals and Henry VII biopics, folks in the entertainment industry may have their facts slightly askew – the turkey is native to North America and wasn’t encountered until Europeans came ashore in the late 16th and early 17th centuries – but didn’t let that stop the lines of people fighting their way past Darth Vader and Michael Jackson in front of Hollywood and Highland from enjoying the legs at a freshly (and temporarily) decorated food truck. 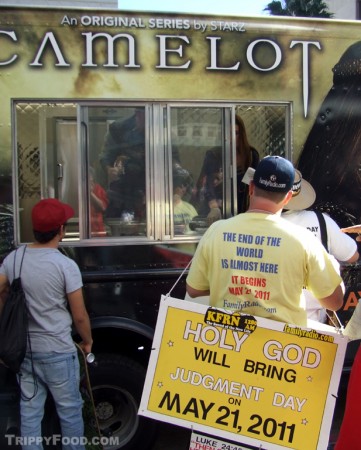 Someone thinks it is time to stock up

During the last week in March (as a promotion for the new series about a young yet-to-be-king Arthur) Starz took a food truck laden with a warming oven and stretched a glossy photographic skin over it to convert it into Camelot on wheels. The truck serviced the Hollywood, Westwood and Wilshire districts of Los Angeles over a 2-day period leading up to the April 1 premier of the show. City Kitchen / Urban Palate was hired to prepare the drumsticks which were dispensed wrapped in foil at each of the stops. The legs marinated overnight in an extra virgin olive oil rub containing sage and other herbs and then slow-roasted and repeatedly basted to keep them moist.

The result was a savory meat club where the flesh melted off the bone. I was somewhat surprised that I was able to eat my way effortlessly through it; most turkey legs I’ve had seem to be laced with a myriad of cartilaginous tendons that require constant removal from each bite, while these had none to be found. I asked if the tendons had been removed and was told that the drumsticks were sourced from a very good poultry vendor that provided a higher quality product, but I was unsure if they meant that the tendons were removed by the vendor or they used tendonless turkeys that dragged themselves across the ground by their wings. 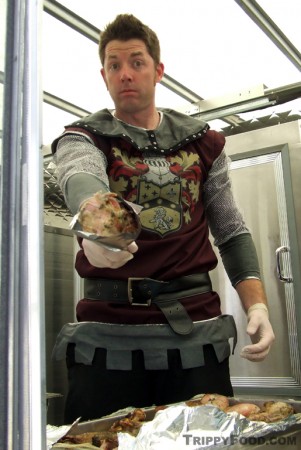 Sir Lancelot offers you his drumstick

While it’s probably true that Sir Gawain never stood guard over his backyard smoker with a tankard of ale while watching jousting on ESPN, I’m sure he would have loved the mouth-watering, tender turkey drumsticks being handed out in his Uncle Arthur’s name. The brief run of the Camelot truck gave me an opportunity to chow down on one of the best tasting poultry truncheons I’ve had in a long time, and I’m not pulling your leg here.

See what other ribald rowdiness takes place at Camelot:

4 Responses to It’s Only A Model