It’s Good To Be The King 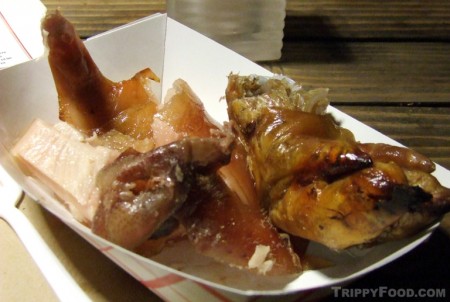 When Mediterranean-inspired Neomeze closed in Pasadena’s Old Town, all eyes were focused on what would emerge in that space. The management team literally stripped the historic hundred year-old building down to the bare bricks, and Kings Row is the phoenix that has emerged from the ashes. I was invited to attend the grand opening party on a brisk Thursday evening the night before opening to the public; to celebrate, Kings Row planed a pig roast in the expansive green patio on the alley. Ironically, the open air back space looks more like a restaurant entrance than the narrow hallway facing Colorado Boulevard where the only indication that you’re in the right place is a square red awning over the doorway. The back entrance features two wooden doors suspended by cables that appear to be free-standing, and once through the portal I found a grinning Chef Thomas Jesse standing watch like a proud parent over an 80 pound hog roasting inside a Caja China box. Chef Jesse started prepping the porker the day before, applying and injecting a citrus Mojo marinade made with sour orange, cumin, oregano, garlic and some pureed pineapple he found behind the bar. 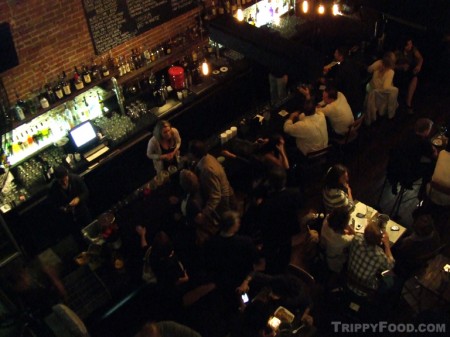 A crowd had gathered around the box like gastronomic paparazzi, all wanting a sneak peak at the beast, but Chef Jesse wasn’t cracking the sheet of hot coals open to release the heat until the pig was ready. The waiting throngs were served bar tapas that included a moist and flavorful (yet simple) salmon skewer and a dry-aged beef slider; sides included corn on the cob, barbecue beans and an odd white chocolate macaroni and cheese (odd because the dish wasn’t swarming with chocolate flavor, yet there was a curious sweetness to it that was unexpected in the popular comfort food). The alcohol was free-flowing and they offered up cocktails from their custom drink menu as well as house-made red or white sangria. Since it seemed pointless to drink sangria that wasn’t blood-colored I opted for the red, but was a little surprised to not be able to locate any fruit in the glass. Being the designated driver I also nursed a Fig in the City, a pulpy and fruity martini made with Kleiner Fig Vodka, Citronage and lychee which lasted me the rest of the late night. 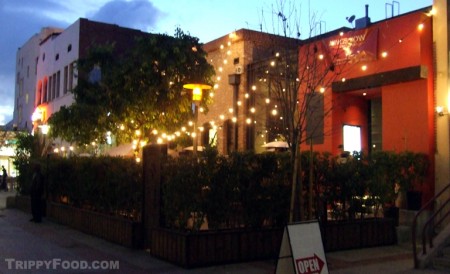 The back patio at Kings Row in Pasadena

The hog was set on a table under a tent where it was carved up on demand. The meat was juicy, tender and slightly tangy and although the skin had some crispness to it, there wasn’t any bubbly, crackly chicharrón characteristic to it. I mentioned to some of the other attendees queued up for pig flesh that I was focused on getting the eyes and cheek meat, and I was assured that those choice cuts would undoubtedly be available at the carving table. Unfortunately the chef’s deft fingers couldn’t locate any eyes in the sockets (they appeared to have cooked away), so I settled on cheek meat, the tail, a trotter and the snout (which I didn’t have to fight anyone for). There wasn’t much edible real estate on the tail or trotter after the long, slow roasting, but I found the snout astoundingly tasty – the outside skin was crispy and the attached meat was dark, rich and moist. 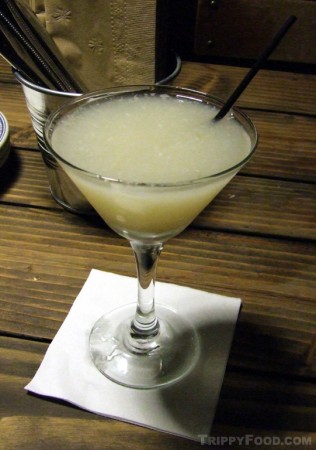 The fruity Fig in the City martini

As delicious as the pork was, I was dying to try some of the new, fusion gastropub menu items; Chef Jesse generously brought out a double portion of his signature oxtail osso bucco, which to me looked more like brontosaurus osso bucco, the kind of dish that topples Fred Flintstone’s car when placed on the window tray. The meat melted away from the bone like a fine pot roast; the flavor was amazing, rendered sweet from the red wine bourguignon reduction. It took six people at our table to wrestle that dish into extinction, every bite memorable.

Neomeze had a reputation as a raucous happy hour party spot, but the reinvented Kings Row has a low key, casual vibe that’s comfortable and loose. It’s difficult to tell if the pre-opening night feel will carry over to regular service, but I see exciting times ahead for the new gastropub. I look forward to trying additional items off the regular menu, but what I enjoyed at the pre-coronation festivities almost left this king speechless.

2 Responses to It’s Good To Be The King