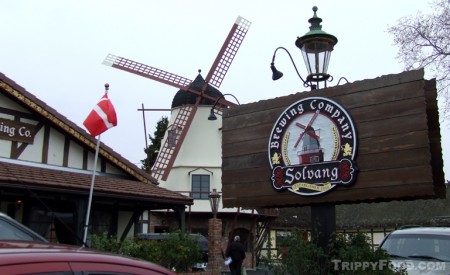 The relatively new Solvang Brewery Company beneath the windmill

When Solvang, California was incorporated in the Santa Ynes Valley by three Danish educator expatriates in 1911 it could have passed for any other fledgling west coast town at the time. It was important to them that they maintain some sense of their own culture, while over a period of time assimilating into the mélange of humanity that is America. By the late 1940s, Solvang had become a Rockwellian paradise that became the focus of a story in the Saturday Evening Post which brought tourists in by the Studebakerload. With the hamlet’s Danish roots exposed, the town decided, “If we’re Danish, we’d better start looking Danish”. All new construction focused on adopting Danish Provincial architectural style and the older remaining buildings were given Scandinavian facelifts. While Solvang doesn’t yet have its own food truck serving Danish tacos, it has blended a variety of cultures into a thriving little city, all held together with Danish glue. 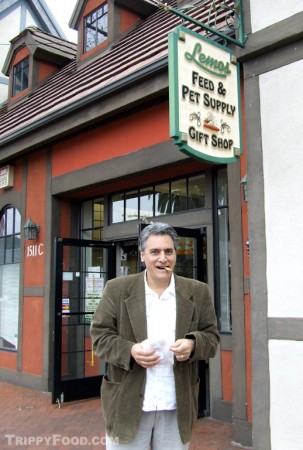 A taste of Solvang from a dog perspective

The merging of cultures is important to take into account when attending A Taste of Solvang, a city-wide festival that has been held there since 1992. What made the 2011 event special was that it was held in conjunction with the city’s centennial celebration. Over a weekend in March, the event was held in three parts: a wine and dessert reception on Friday night, a Walking Smörgåsbord and wine tasting tour that featured 38 stops in and around town on Saturday, and a BYOP (Bring Your Own Picnic) in Solvang Park where you can eat your own smørrebrød until you keel over or reach hygge. The Walking Smörgåsbord seemed like a good bet – you could get in enough walking to work off those three æbleskiver that seemed like a good idea at the time. Each foot soldier was handed a placemat-sized map which essentially served as “admission” to the event; vendors would then stamp, sign, scribble or otherwise mark on the map that you had partaken of their little bit of Denmark.

The first stop served as a reminder that a “taste of Solvang” did not necessarily equate to “a taste of Denmark”; at Lemos Feed and Pet Supply, smörgåsbord hoppers were treated to a choice of what looked like homemade cookies… or dog biscuits. The store employee staffing the visitor’s table looked at me like I had two heads (or a wagging tail) when I asked if the doggie treats were fit for human consumption – he responded that they were baked locally using natural ingredients, which did not include anything I normally eat at my friendly neighborhood charcuterie anyway. It should come as no surprise that I passed up the cookies and went full bore after the dog biscuits. The crunchy treats had a taste not unlike Ry-Krisp crackers and left me with whiter teeth but the urge to urinate on the fire hydrant. Stop # 2 (technically # 26 according to the map) dealt with more human treats – the popular Olsen’s Danish Village Bakery was handing out samples of Danish kringles. Olsen’s version is the Americanized one – a multi-layered snack made primarily with pastry dough filled with almond paste, raisins and custard and cut into squares, then topped with sugary icing (the Danish version is more akin to a soft pretzel). In addition to the basic kringle, they also offered one with cherry filling (and topped with chocolate icing) as well as an apricot version, but I opted for the old tried-and-true. While I ate my desert, I surveyed the wide variety of breads and pastries baked on the premises, including plastic buckets of Danish cookies, but gawked in amazement at what was being billed as merengue chicks – essentially, the Andre the Giant of the Peeps world. 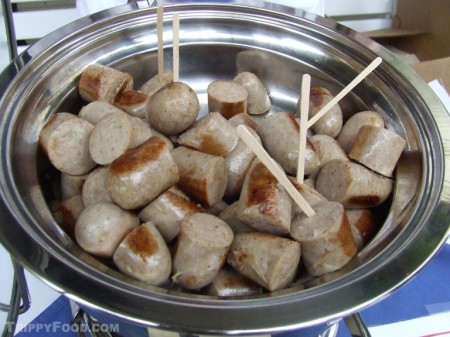 Solvang Brewing Company (making its home under one of the famous windmills) was offering pours of their IPA and Windmill Wheat (essentially a Belgian, yes Belgian) wheat beer. I opted for the latter, a sturdy cup with hints of orange peel and nutmeg – at 4.4, it was relatively harmless, although I had to wonder if the IPA’s mule-kick 7.9 percent had an equivalent on the Richter scale. This was the first indication that we were entering non-Danish territory; other vendors were offering pasta, olives, Italian sausage, and smoked brisket decidedly un-Scandinavian but made, grown or prepared locally. We seemed to fare better when sticking to the traditional; Paula’s Pancake House had a crock pot full of segments of their famous medisterpølse which locally-made using a 30-year old recipe. Medisterpølse is a Danish pork sausage that in the case of Paula’s version has a dense consistency created by running the meat through the grinder three times. Allspice, clove, onion and garlic are added to the mash and the result is lightly spicy and bursting with flavor. 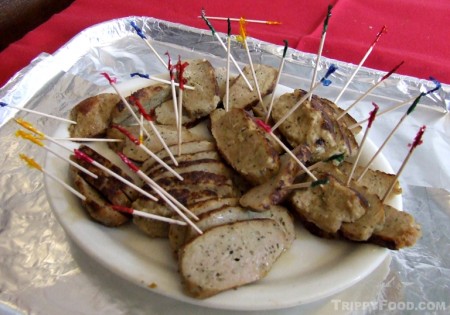 Sliced meatballs from Red Viking Restaurant for a Taste of Solvang

Several restaurants did their own takes on meatballs; Red Viking served frikadeller, small pan-fried meat ovals served typically without an accompanying sauce, topping or gravy. The meat cakes were sliced lengthwise and skewered with toothpicks, but when pressed for ingredients the servers weren’t completely sure what was in them. Bit O’ Denmark featured their signature dish, a tiny round meatball with brown gravy that seemed more Swedish than Danish, served alongside a dollop of cooked red cabbage. Although Bit O’ Denmark is the oldest restaurant in town and resides in one of the earliest buildings that once housed a church, participants were led into a plastic-enclosed patio to sample the meatballs which took away slightly from their historic Solvang pedigree. 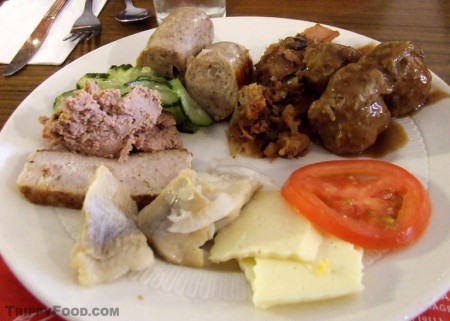 The smörgåsbord at Red Viking Restaurant in Solvang

Not to be outdone by Olsen’s, Mortensen’s Bakery handed out sugary cinnamon crisps, baked swirled disks of crumbly, crunchy sweetness. These pastries were being distributed at a table next to the Greenhouse Cafe’s “open faced sandwich” (essentially a triangle of buttered pumpernickel bread topped with a piece of Havarti), and if you so desired, they’d pop the top off a bottle of Carlsberg to wash it down. By far, the longest lines in town were for the Danish holiday favorite (the aforementioned æbleskiver) at the delightfully generically-named Solvang Restaurant. If you never had one, visualize a round pancake – that’s essentially what it is. The batter is poured into a greased pan with hemispheric, golf ball-sized indentations where it is turned until it takes on its round shape and golden brown color; the golden ball is then coated with a raspberry jam and then sprinkled with powdered sugar. 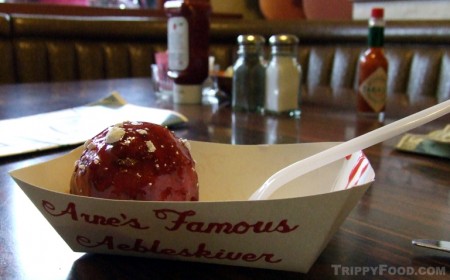 A freshly made jam-coated æbleskiver from Solvang Restaurant

You would think that devouring all these samples would do a Siegfried and Roy on one’s appetite, but it seemed that all that walking whipped up an appetite that only the smörgåsbord at Red Viking could put down. About a pant size higher by the end of the day, I felt more like I ate Solvang than tasted it. Although the Taste of Solvang event is annual, check their website to see if they will be staging the same type of event; if so, it is a great way to sample different foods and get to know Solvang while you’re at it. I believe next year they’ll be featuring mermaid on the menu.

NOTE: This cost for this event was provided by the the event’s organizers (with the exception of the meal at Red Viking). The content provided in this article was not influenced whatsoever by the organizer of the event.