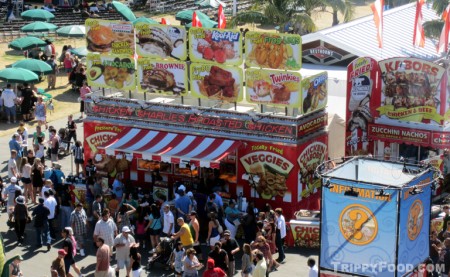 Most Southern California counties pull out all the stops when it comes to their annual county fairs; Riverside County coincides their fair with the annual Date Festival and the Los Angeles County Fair in Pomona is… well, big. The Orange County Fair has built a reputation for being a copious cornucopia of coronary-causing cuisine and confections, a massive contradiction since the grounds feature a year-round farm with classes and demonstrations on growing sustainable and Earth-friendly crops. Livestock barns abound housing live pigs, cattle, sheep, goats and even llamas while 4-H members auction off animals raised from babies, and while speaking to the agriculturists present is a valuable learning opportunity with the range of questioning usually deteriorating to, “Is that edible”?. In one pen, a colossal sow was suckling two infant pigs (both of which, to me, looked like the little tykes I saw peering over the top of clay dishes with their lifeless eyes at Restaurante Sobrino de Botín in Madrid); I asked the porcine expert on hand if pig milk was edible. I’ve had a variety of products made from cow, sheep, and goat milk and even enjoyed airag (a Mongolian drink made from fermented mare’s milk), but can’t think of a single product I’ve encountered made from pig’s milk. The pig wrangler confirmed Greg Fokker’s statement that you can milk anything with nipples, but stated that the reason it is uncommon is that each teat produces very little milk, requiring hours and multiple milkings just to produce a single glass of milk. 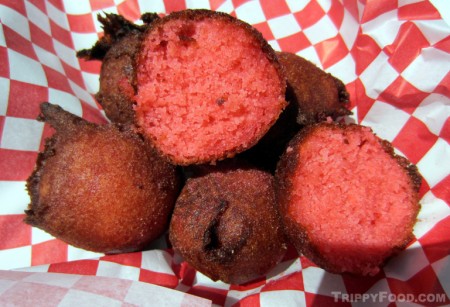 Like the other county fairs, the OC Fair is a veritable meat fest; I’m sure if you could somehow make off with one of the black Angus steers on display they’d happily throw it on the spit for you (at some booths, Buick-sized slabs of meat were slowly roasting on a rotisserie over an open fire). Not only were some of the food items familiar (the ubiquitous meat club known as the turkey leg was in ample supply), but many of the same vendors that frequent the other fairs were present, including the Fry Daddy himself, Chicken Charlie. C.C. was battering and immersing the usual suspects in a roiling bath of hot oil including Twinkies, avocados, Klondike bars and the horrific Krispy Kreme chicken sandwich, but their hot item at the 2011 fair is the deep-fried Kool-Aid (Oh, yeah!). I’m sure you share my initial curiosity about how the hell to deep fry an artificially-flavored and colored sugar and water mixture; I mean, let’s face facts – it would require a degree in physics to batter a ball of liquid. The simple solution is that Kool-Aid is added to the mix, which generally tastes like sweet corn dog batter. This creates what is essentially a red velvet hush puppy (sans the uppity flavoring) – blood red donut holes with a dusting of that Kool-Aid dust that leads to an asthma attack when accidentally inhaled. May God have mercy on my soul, but I actually enjoyed the bloody Munchkin. 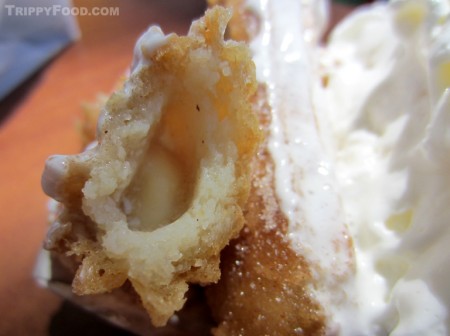 A deep-fried churro stuffed with butter

One sideshow freak that seemed to have been spawned last year from a chippie’s bad acid trip was still being hawked at several booths – the cholesterol-laden deep-fried butter. I was having visions of a battered and/or breaded stick of butter quickly dropped in the grease, and against doctor’s orders I decided to have a go at it. When I asked how they get the butter from melting into a liquid mess in the fryer; it was explained that they take a hollow churro and stuff it with butter and then deep fry it. The paper dish had a layer of short regular churros on the bottom with three of the larger butter-core segments on top, accented with a dollop of whipped cream. The taste was not disgusting, but I could only muster a single bite – the sensation of the greasy semi-fluid oozing from the churro wound was too much for me to endure; I found an adventurous fairgoer that offered to polish off what was left. 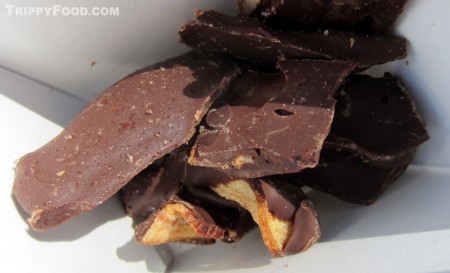 The chocolate-covered bacon was a little odd. I’ve had blocks of chocolate with crumbled bacon mixed in and on occasion, candy bars neatly hiding one or two full strips of bacon. Apparently at the OC Fair, chocolate-covered bacon is a dish best served cold; it involved dipping the bacon pieces in chocolate and then refrigerating (or freezing it). The chocolate (which was actually decent) began melting in my hands, not in my mouth when it hit the summer heat; I didn’t mind so much, but the cold bacon was somewhat chewy. I avoided the previously mentioned fried items as there’s only so much the circulatory system can handle in a single day, but there were plenty of “normal” items including Greek food, funnel cakes, humongous sausages and the fair-themed “on-a-stick” items including meatballs and pork chops. 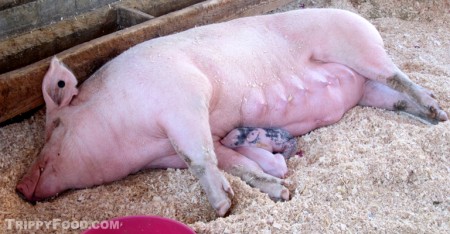 The fair has enough going on to keep you moving including pig races, elephant rides and live music from several stages, but there are defibrillators on hand just in case. You may want to take the chair ride which traverses the length of the fairgrounds, providing a spectacular vulture’s eye view of the festivities, but I highly advise going easy on the fair chow lest you do the old Technicolor yawn on other fairgoers about 100 feet below. If you decide to make the deep-fried items at the OC fair an important part of a balanced breakfast, plan on getting there early; by mid-afternoon the traffic is backed up for miles on the highways leading into Costa Mesa. After seeing how livestock is raised and crops are grown you can disregard everything you learned, get out on the blacktop and sample the unusual cuisine that makes the OC Fair famous; you may want to take along some friends to share some county fair tapas if for no other reason to make your doctor happy. This year the OC Fair is placing the emphasis on food with the “Let’s Eat” theme, with several programs running all summer long. On Thursdays, the fair hosts a farmer’s market prior to the gates opening and eight different Southern California gourmet food trucks inside the gates, and presents four popular chefs (Duff Goldman, Carla Hall, Michael Voltaggio and Rick Moonen) on the massive The Hangar stage. This year, they also offer food tasting on Fridays allowing fairgoers to sample the food for only $2 per item. Just remember while you’re there though – grease is the word.

NOTE: Admission cost for this event was provided by the Orange County Fair. The content provided in this article was not influenced whatsoever by the organizer of the event.