The Fresh Prince of West Hollywood 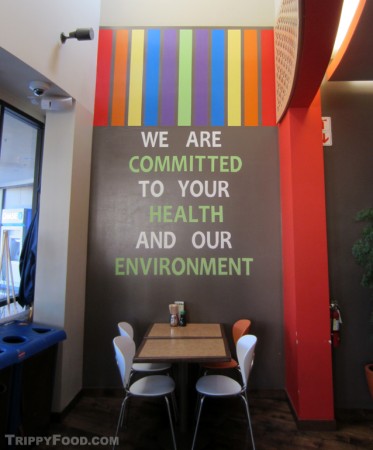 fresheast has your dietary back

I have to admit that I was experiencing slight trepidation about passing through the doors of fresheast in West Hollywood for a media tasting; from the outside it looked like it was going to be a Far East-influenced version of Souplantation, but my fears were unfounded once inside. It was obvious that in addition to only using fresh, sustainable and local (when possible) ingredients that they were going to see that I ate healthy whether I liked it or not.  Executive Chef Jonathan Schwichtenberg has made it his mission to use only certified natural beef and chicken and organic salmon from Scotland and eschews the use of refined sugar, butter, nuts, leading me to wonder how they were going to get past the old, “It tastes like it’s good for me” dilemma. 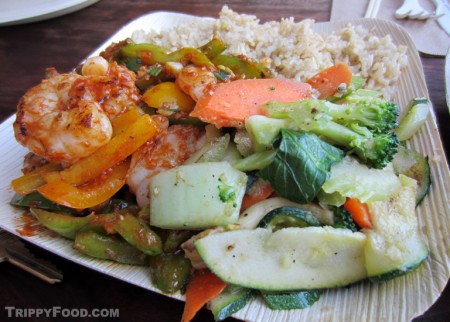 A fair description of the restaurant has to contain the phrase “casual dining” – no fine china or silverware to wash here, guests eat off of paper plates (recycled paper plates, naturally) and use what I hope are biodegradable plastic utensils. The hip, earth-friendly aspect of the dining experience is that the dishes are served in bowls made from the wide ends of fallen palm fronds (not palm fronds hacked out of live trees) making the serving dishes both attractive and environmentally sound. 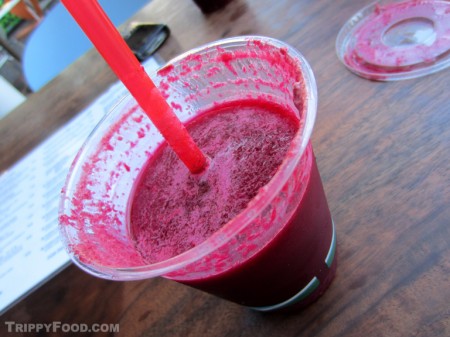 Naturally, all this focus on protecting our environment and promoting healthy eating is for naught if the food is bland and uninspiring, and fortunately this is not the case at fresheast. Dishes are sweetened with raw sugar, plenty of power-packed familiar Asian spices are used and the natural, organic meats used taste like animals are supposed to. Many of the dishes we tried were made with Jidori™ Chicken and you can believe that if I didn’t think the flavor of these free-range yardbirds warranted the use of the obligatory trademark symbol, I wouldn’t even mention it here. The green coconut water curry employed a simple combination of Thai green curry, onion, tomato and cilantro and although it was mild the chicken was moist and tender and the miso glazed chicken tasted like it came from a completely different bird. fresheast excels where they kick up the heat few notches; I’d put the fiery fresheast shrimp against your friendly neighborhood camarónes diablo for a tasty and satisfying slow burn. 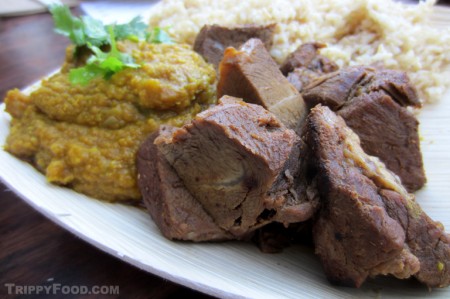 The spicy garlic noodles were packed with vegetables that still had some snap to them and the combination of the garlic, cilantro, sesame oil and chilies gave them a satisfying kick. The larb gai was slightly different than what I’m used to – the chicken flesh was left in bigger chunks but it still blended well with the accompanying vegetables. A fried avocado spring roll put a California twist on an Asian favorite; thankfully the skin stayed crisp and wasn’t soggy while the innards were almost creamy. 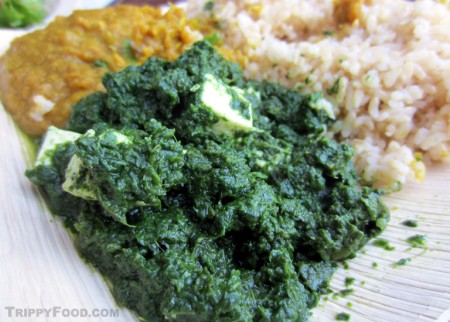 Since the name fresheast implies that the menu is representative and influenced by a wide variety of Indo-Asian cuisines, we tried dishes that seemed odd appearing on the same bill. Their palak paneer was decidedly firm and appeared to be coarsely chopped – I was pleased that it wasn’t cooked down to mush. The bulgogi (Korean beef) dish had a fresh edge from the cucumber and green onion, and was perfectly seasoned and cooked. I think the curry lamb was one of my favorite dishes – grand chunks of melt-away meat that were flavorful without the mealy taste that sometimes accompanies lamb. 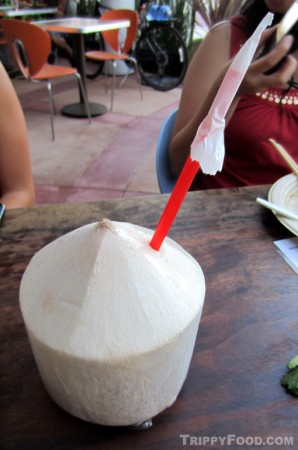 Fresh young coconut (a drink, not an 80s band)

To wash down this wholesome Asian cornucopia, I tried two beverages – a vibrantly colorful beet juice drink with citrus added to it to take the earthy edge off and a fresh young coconut (which admittedly looks like an 80s pop band on the menu). There’s no dressing up the coconut – we’re talking a white pulpy semi-orb with a hole drilled into the top allowing for the neat insertion of a straw. The coconut “milk” had a cool, watery and slightly sour taste, but if perfectly complemented the cuisine. Desert was cups of freshly-made mango and strawberry sorbets; although the strawberry confection had more tang to it and was by far more popular, I enjoyed the fresh fruit flavor of the mango variety.

Although I wanted to try some of the other menu items, the food was both filling and satisfying and we fed a group of about 8 family style on just a handful of dishes. fresheast has been open since October of last year (10-10-10 to be exact) and although it has the appearance of a venture made for franchising there is currently only the single location. I imagine if the concept catches on we’ll see some expansion of the restaurant – most likely east.