I Smell A Rat 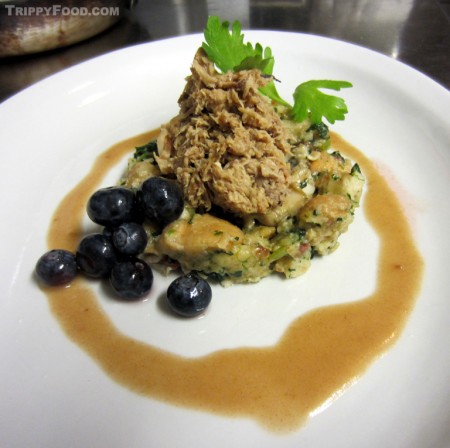 The plated nutria with Rockefeller dressing

Despite the American romance with Cajun cuisine, the thought of Paul Prudhomme or Emeril Lagasse presenting a steaming platter of rat fricassée conjures up visions of restaurant doors being blown open in a stampede with more force than Hurricane Katrina. While you’re not likely to find South America’s most notorious undocumented alien on the menu in high-end Big Easy eateries, many rural southern Louisianans have discovered that the high-protein, low cholesterol nutria is a plentiful meat source that the State of Louisiana is more than happy to see hunted to extinction. The nutritious nutria (or coypu – its original South American name) was originally imported to the United States to be raised for the fur trade; the clever rodents managed to free themselves from the bondage of the pelt farm back in the 1940s (thanks in part due to hurricane damage to their pens) and started in to doing what they do best – denuding marshes in nothing flat like some organic Weed Whacker. 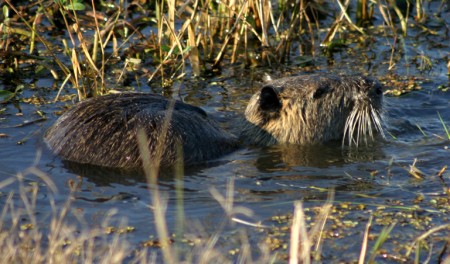 The nutria makes its common nephew Rattus norvegicus seem downright cute; this Templeton on steroids can achieve a length of three feet (with almost half of that tail). It sports a whiskery beard which frames huge, bright orange incisors (the better to voraciously chew through any vegetation in sight) and has webbed back feet which give the aquatic rodent a clear advantage in the 50 meter freestyle. These bad boys are born to eat – literally; although like most mammals they nurse after birth, they are also capable of cleaning the veggies off their plate on the day they’re born – adults eat about a quarter of their weight daily. Various programs have been implemented to remove the nutria; since its inception in 2002, the Coastwide Nutria Control Program licenses people to bag an unlimited number of the varmints – each nutria tail turned in fetches $4 (which sounds like chump change until you realize that nearly half a million were redeemed in 2009 for a payout of over 2 million dollars). The Louisiana Department of Wildlife and Fisheries‘ attempts to institute programs to market nutria meat have been largely unsuccessful, undoubtedly due to rat-shy chefs and diners.

The L.A. Gastronauts prepare for a Cajun feast

Enter L.A. Gastronauts. The Los Angeles chapter of the famed New York organization that gives the Explorer’s Club a run for their money is led locally by Helen Springut, who devises outlandish zoological gastronomic adventures on a somewhat monthly basis. These dinners are generally held as pop-ups, with the setting for the feast often times as fascinating as the menu items. For its January 2012 dinner, Springut enlisted the culinary skills of Chef and restaurant consultant Jeffrey Thomas and Chef Peter Haller to prepare a Cajun feast with the nutria as guest of honor. The L. A. Gastronauts selected the quirky, antique-looking Villains Tavern to stage the event; the venue (which opened in mid-2010) looks like the kind of place Marie Laveau would be happy to call home. A dark, unmarked, chain link gated area in the shade of a huge ficus is the portal to another world – the actual building surrounded on all sides by a tent covering which plunges even the outdoor portion into darkness. A large wrought iron marquee covers the entrance to the bar area which is furnished with antiques and quirky bits of Americana while the huge glass windows are obscured with shelves holding hundreds of antique bottles of all shapes, sizes and colors. Behind the inside and outdoor bars are old Gothic wooden church windows refitted with mirrors that make you wonder what really goes on here in the dark of night when the alcohol flows like the Mississippi. 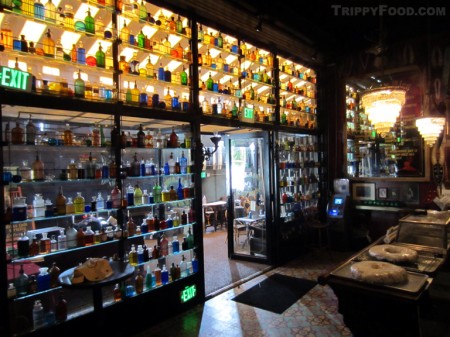 Villains Tavern’s menu doesn’t appear to have any items that are a drastic departure from what you’d find in any upscale bar in L.A.; however they do get innovative with preparation and deserve points for their naming convention featuring whimsical names such as “Devil Dog”, “Demon Burger” “Wicked Fries” and “Babe on a Bun”. For the L. A. Gastronauts’ Cajun Feast, all food was brought in by the native Louisianan chefs; the menu read like a bayou grocery list – snapping turtle salad with market greens; country rabbit pâté with pickled okra; hand-stuffed crawfish boudin sausage with a corn maque choux; rich, crusty and cheesy tomato pie Paula Deen would drool over; and last, but certainly not least – braised nutria with Rockefeller dressing. It was a rare pleasure to watch the chefs at work, and somewhat humorous to see how they transformed Ben and Socrates into a dish that could scarcely be described as rodentia. Chefs Thomas and Haller didn’t pull any punches when it came to expressing their disdain for the nutria; although the meat was in a state that required days of preparation, Thomas had on hand the butchered hind quarters of a nutria that hadn’t been used for the dinner. The carcass was heavy with muscular, dark meat and virtually no sign of fat, which under normal circumstances would not be any more frightening that rabbit meat; however, the off-putting part of the preparation is the smell – an earthy musk that emanates from the meat itself. 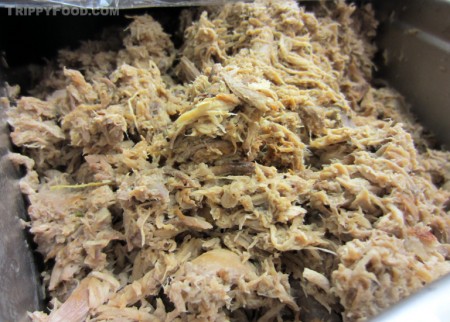 Because nutria boasts a lean meat, it was cooked with one part pulled pork to two parts rat. It was difficult to tell the difference when sampling a spoonful of the meat, partially because of the spices used and partially because of the similarity in texture. Chef Haller plated the dish beautifully – he started by filling a ring with the Rockefeller dressing, well-seasoned and featuring tiny bits of oyster and freshly cut croutons. The dressing was crowned with a mound of the meat and then garnished with pickled blueberries and a sprig of baby celery, finally surrounded by a thin stream of gravy. The marriage of textures and tastes celebrated in my mouth, and while I found the dish to be astoundingly delicious I almost felt sorry for the Gastronauts who despite their fear factor would be faced with an aesthetically pleasing creation with a much muted nutria component. After expressing my extremely slight disappointment verbally, Chef Thomas expressed that if he had known about my exuberance in wanting to experience nutria in a simpler form he would have made a separate preparation, to which I jokingly replied, “No worries, I’ll just take these hind quarters”. Surprisingly, Thomas suggested I do just that, since it wasn’t going to be used and would probably just be thrown away. 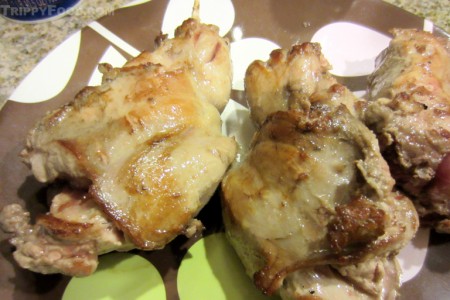 The seared nutria ready to braise

Friend and fellow bizarrenivore Eddie Lin (who I had accompanied to the dinner) suggested we bring our catch back to his place, the site of numerous desecrations and defilements (such as grunion rings, bacon-wrapped bull pizzle and the infamous “dick-on-a-stick“) for a more basic preparation of the beast. Eddie did some additional butchering to allow us to sear the meat in a pot with grape seed oil, garlic, salt and pepper. After giving the flesh a nice char, we simply braised it in the finest Cabernet Sauvignon (Two-Buck Chuck, to be precise) for several hours until it emerged moist and tender from its dark and murky broth. The difference in flavor of the simply prepared meat and its Rockerfellered counterpart was like night and day. Each piece was about the size of a generous rib-in chicken breast and the flesh easily tore away from the bone. The wine enhanced the flavor but couldn’t mask the primal (almost swampy) aroma that rose from each bite and flavored the meat. While still maintaining the texture of pork or rabbit, the taste was unique and immediately hinted none-too-subtly at being a game meat. I’m not sure I would don some waders and a baseball bat to slosh through the bayou in search of my next rat-ratatouille, but having enjoyed the experience I would certainly try it again if the situation presented itself.

Man is its own worst enemy, wreaking havoc on the ecosystem and environment by introducing critters that have no business in a faraway land rich in natural resources, but literally turning the tables on the nutria eliminates a man-made problem while providing low cost, nutritious, high protein sustenance. For now, nutria is difficult to come by in Southern California, but I suppose there’s only room for one large rodent, especially one with red shorts and yellow shoes.