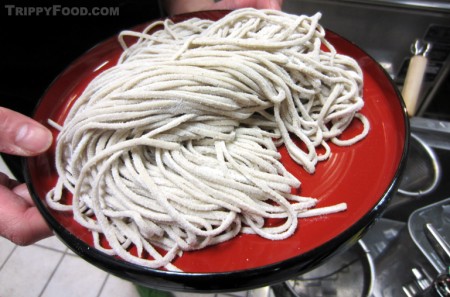 Growing up in an Italian household indoctrinated me into the diverse world of pasta from anellini to ziti; however, my experience with Asian pasta has been largely limited to lo mein and Korean glass noodles (I hardly think American chop suey counts). I recently had an opportunity to use my noodle and learn about Japanese soba at Common Grains’ soba pop-up hosted by Torrance, California’s newly-opened Soba-Ya restaurant. While the restaurant’s menu featured an ample offering of Japanese noodle and rice dishes, I wanted to order from the limited menu of handmade soba noodles prepared on behalf of Common Grains, a Japanese cultural program founded as a joint venture between Shinmei (a Japanese miller and rice distributor based in Kobe, Japan) and local soba artisan, Sonoko Sakai. The soba (Japanese buckwheat noodles) are made from stone-ground grain, handmade and lovingly prepared in Shinmei-owned Soba-Ya’s kitchen by Chef Mutsuko Soma. 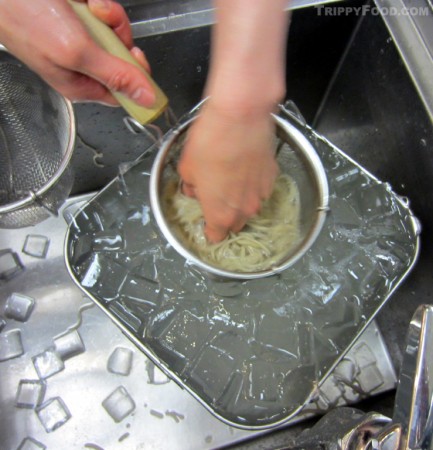 Chilling the soba prior to serving

Common Grains is sponsored by the Japanese Ministry of Economy, Trade and Industry’s “Cool Japan” program, which introduces industries to a wider audience with a focus on promoting Japanese culture worldwide. In addition to preparing several soba dishes, Common Grains also brings their traveling exhibition to Soba-Ya featuring a variety of Japanese foods and ingredients, as well as utensils and cookware with a focus on sustainability and education. At Soba-Ya (as with their other area pop-ups), Sakai conducted several dashi workshops where guests experience and participate in the creation of various preparations of dashi (a soup and cooking stock used in a variety of dishes including miso soup and noodle broths); similar workshops will be held at other hosted locations in the near future. 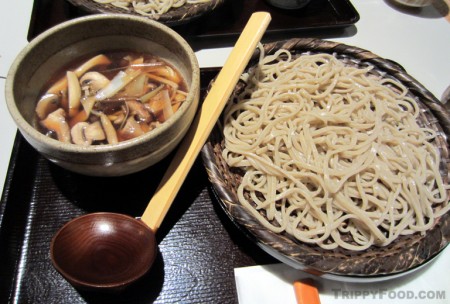 I had the pleasure of watching Chef Soma prepare the soba in the kitchen – the process is fascinating, with each step serving a particular purpose. Soba noodles have several seasonal preparations; in the winter they are typically served hot in soup, while they are prepared cold as a popular, almost refreshing dish in the heat of the Japanese summer. Naturally in the frigid, Arctic air of the Southern California winter Soma prepared the cold variety, an almost ritualistic endeavor requiring precise timing; each order is made individually. The fresh noodles look almost like old, worn shoelaces – slightly gray and with a grainy, almost fuzzy appearance; a single portion of the flat noodles are placed in a steel basket and then immersed in a roiling bath of foamy water. At the sound of the bell, the noodles come out fighting (literally – the cooking time is regulated to the second by a timer); they’re placed in a basket in the sink under cool running water while they are massaged by the chef. In addition to cooling them down and halting the cooking process, the brisk scrub also removes the excess starch from the noodles to improve the taste. After the cool-down, the soba is then placed in another steel basket and plunged into a frigid bath of ice water briefly after which the excess water is vigorously shaken out by hand. The chilled noodles are transferred to a zaru (a flat, plate-like woven basket) for delivery to the table and any tsuyu sauce for dipping is prepared to accompany the dish. 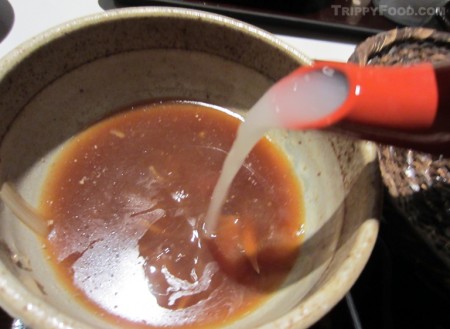 Adding the sobayu to the remainder of the tsuyu

We tried both of the featured sobas – one with a hot tsuyu made with a variety of mushrooms cooked in dashi with a touch of white truffle oil, the other with a cold walnut sauce. The noodles had the perfect texture – not soggy, not too chewy – and had a sweet, almost nutty flavor. There’s no delicate way to eat noodles, and asking for a fork and tablespoon would most likely result in being ushered out of the restaurant; if your sensibilities cause you to recoil in disgust to hear noodles slapping against lips, the breathy sound of inhaling the noodles, or the sight of the pasta dangling from diners’ faces, you ought to rethink your culinary adventure. The combination of the soba and the sauce with firm bits of mushroom created delicious dance in my face with each raise of the chopsticks. Our server brought a tea pot to the table, which I at first mistook for a hot accompanying beverage, but she informed us that the hot, milky fluid was in fact sobayu, the thickened water the soba was cooked in. We were instructed to pour this into the bowls of tsuyu and drink the result, creating a veritable liquid soba. 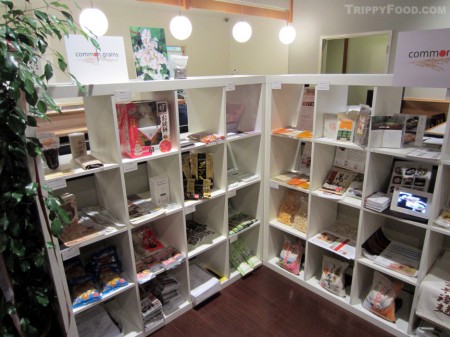 The pop-up only runs through February 21, and since the restaurant is relatively small, reservations are recommended. After that date, you’ll still be able to enjoy soba and other Japanese specialties at Soba-Ya, although you’ll have to hunt down the next pop-up and dashi workshop from Common Grains’ website. If you haven’t tried soba, this is the perfect introduction to the Japanese dish in a social situation, and a nice way to pasta time.