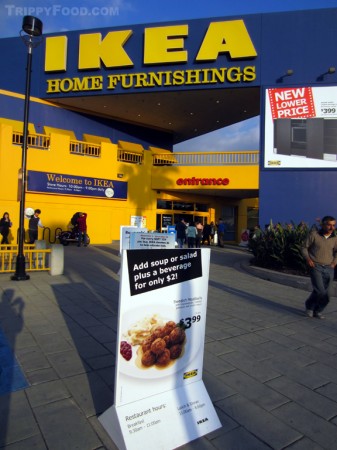 If the first thing you think of at the mention of the name “IKEA” is throwing a half-assembled particle-board desk down a flight of stairs with bruised knuckles and cut fingers, you’re not alone; for decades the name has been synonymous with low-cost, DIY furniture. For Americans, IKEA as a food destination appears to be a well-kept secret, but the Swedish furniture giant has been serving up basic Scandinavian fare since the opening of their first store restaurant in Älmhult, Sweden way back in 1960. Most of the IKEA stores have three food features: the IKEA Restaurant, Bistro IKEA and the Swedish Food Market.

The IKEA Restaurant is a gleaming, cafeteria-style chow line where diners queue up with plastic trays to order from a minimalist menu. Although the items change out seasonally, there’s usually a chicken offering and a salmon dish, but their always-available specialty is the Swedish meatballs. The meaty orbs are typically fashioned from a 50/50 blend of beef and pork, although some locations offer a pure beef halal variety. According to IKEA’s Real Swedish Food Book, the meatballs are fried and contain potato and rusk flour in addition to the meat. The gravy is advertised as “cream gravy”, but the IKEA Restaurants in Southern California appear to be topping their balls with brown meat gravy. Although there seems to be a random haphazardness in scooping the meatballs onto the plate, the menu dictates a ration of precisely 15 (confirmed by using my rudimentary math skills at the table). The obligatory side dish is mashed potatoes, and the meal is accompanied by a generous glop of lingonberry jam (a red berry that appears to be the national fruit of Sweden). As anyone who has accessorized their lamb with mint jelly will tell you, the sweetness gives a nice contrast in texture and taste to the meat, and when you gather up a forkful of meatball, potatoes, gravy and jam and shovel it into your yap, your taste buds will frolic like they’re on a Swedish playground. While I’m certain you can find Swedish meatballs elsewhere that elicit the image of Wagyu cattle in antic play on the snow-dusted grass along the sides of the Iddefjord, you’d be hard pressed to find them of equal quality and taste at a mere four bucks. Naturally, you’ll be self-seated on the most stylish and functional cafeteria furniture you can put together with a screwdriver and conveniently included crescent wrench. IKEA hosts seasonal festival dinners in the Restaurant, which closes early for the occasion. Attendance at these all-you-can eat food fests are by ticket only, and these regularly sell out quickly, in part due to their ridiculously low price (around $10 per person). These include their annual Crawfish festival in August, an Easter smörgåsbord and a Christmastime julbord. 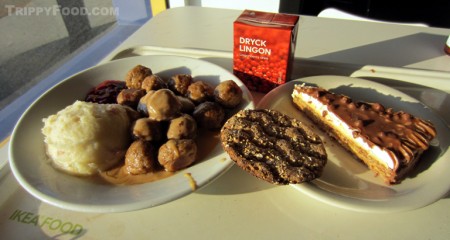 Bistro IKEA is more suited to the parents who just purchased little Timmy’s race car bed with the rug rats in tow. While those wishing to immerse themselves in Scandinavian culture may scoff at the Americanized menu, Timmy’s dad will appreciate that he can feed their little family of four for under $10. There’s no worry about how the picky little brats will decide what to devour – the only entrees on the menu are hot dogs and slices of pizza (each weighing in at a respectable buck a piece). Follow that up with a cinnamon bun or soft-serve non-fat frozen yogurt (also, you guessed it – a buck apiece) and drinks for a dollar or less (except for the ultra-expensive bottled water, around $1.25). The hot dogs don’t suck as bad as the tube steak that’s been rubberized on the heat rollers at the 7-11 for a day and a half, and at less than half the price of the red hots at Costco, it’s one of the best bargains in town. Since the theme of this article is Scandinavian food, you can safely ignore the Bistro IKEA, only acknowledging it as you pass through to get to the grocery area. 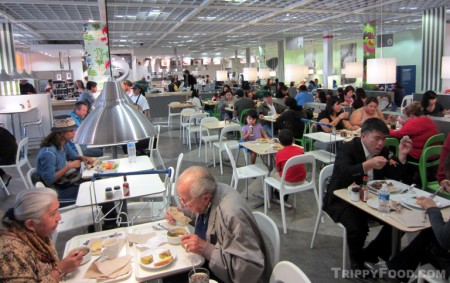 The dining area at IKEA

The Swedish Food Market is your one stop shopping destination for all your Scandinavian needs. Here, knäckebröd (crisp bread) is stacked to the ceiling like the Great Wall of Stockholm in more varieties than you ever knew existed (if, in fact, you even knew knäckebröd existed). Think of knäckebröd as a rye flatbread, the Swedish version of matzo, with each package plainly labeled in Swedish to let you know what flours and grains have been added. There are freezer cases packed with crawfish (the Swedes typically eat these cold), salmon, sausage, IKEA’s signature meatballs and a variety of frozen foods that will help you prepare your own Scandinavian feast at home faster than you can say, “Smörgåsbord, smörgåsbord, børk, børk, børk!”. You can stock up for school lunches with juice boxes filled with lingonberry or elder flower juice (and who doesn’t love that?) or bottles of the syrup to make gallons of Scandinavian Kool-Aid. Mom can also pick up a bottle of glögg to nip from after that aromatic morning cup of UTZ Certified coffee, also conveniently available in the Market. There’s a wide variety of snacks including chocolate, ginger snaps, Danish cookies and even Swedish pancake mix, and the refrigerated section with some unusual and somewhat scary items such as fish and crab in what looks like toothpaste tubes and a variety of canned and jarred herring and sardines. Late in 2011, IKEA introduced their own line of food available in the Market to augment known and familiar Scandinavian brands. 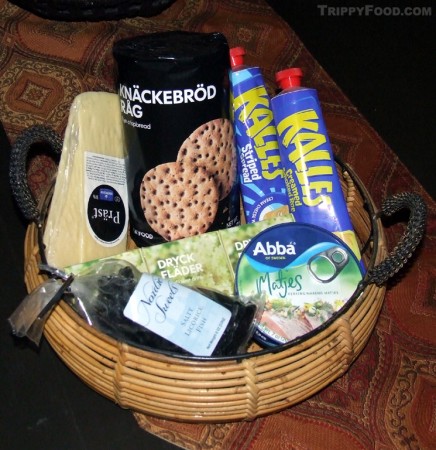 A basket of Scandinavian treats from IKEA

The Market is a relatively inexpensive source of experimental cuisine for a bizarrenivore such as me. On the advice of a Finish co-worker, I made a shopping sortie to the Swedish Food Market and returned home victorious with the spoils of my foray: a cow’s milk Prästost cheese, knäckebröd, a can of Abba Matjes pickled herring, a couple of tubes of Kalles spreadable fish roe (“kaviar”), elderflower juice boxes and a rather ominous looking bag of Nordic Sweets salted licorice Swedish fish. Since all of the items were ready to eat, I had a ready-to-eat feast prepared in a tidy little five minutes. As I sampled each item, I noted how the Scandinavians appear to love the co-mingling of sweet and salty together, a combination that somehow combines in my mouth to form sour. The saltiness of the cheese was a mild surprise, but I was totally unprepared for the saline onslaught that the school of licorice fish presented. Likewise, the fish egg toothpaste tasted like it was made with roe harvested from the Dead Sea, and even the cheese was useless in cutting the salinity.

Outside of Europe, cuisine representative of Scandinavia is scarce, so it’s comforting that a short trip to your friendly neighborhood IKEA is all that’s required to either dine in or grocery shop for a little bit of culture from the original Great White North. Now if they only had reindeer meat…