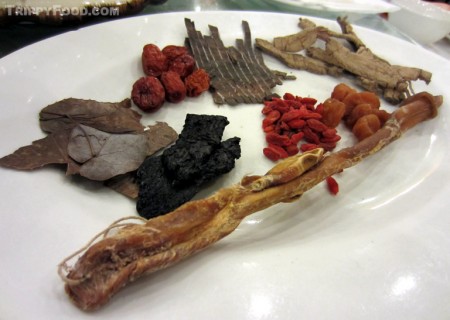 The simple yet unusual ingredients for deer penis soup

As any longtime readers of Trippy Food will attest, I would walk out of brain surgery to try one of Chef Lupe Liang’s amazing and exotic dishes at Hop Woo in L.A.’s Chinatown. Chef Liang is a veritable Willy Wonka, creating magical concoctions featuring Noah’s share of the animal kingdom, so when Eddie Lin recently asked me to be the Hop Woo goodwill ambassador for Linda Flood (writer for Swedish magazine, Vagabond) I accepted with dignity and grace. Lupe hinted that he was going to make something special for the occasion, and based on my previous visits I couldn’t begin to imagine what that might entail. 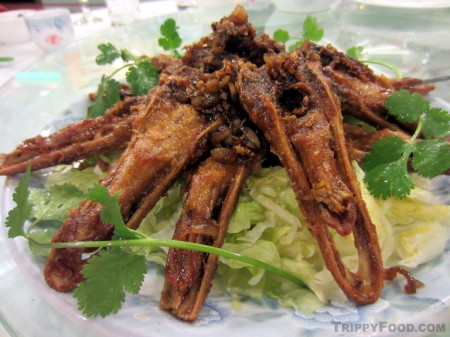 As usual, Chef Liang pulled out all the stops. Upon arrival, there was already a dish of savory duck feet cooked in soy sauce on the table; eating duck feet requires the same laborious process as with chicken feet to extract the meat using intricate dental maneuvering. There seems to be less flesh on the bone than Daffy’s barnyard counterpart, so the challenge is to chew into the webbing between the toes. There is a time intensive process for preparing duck feet where the bones are removed leaving the flesh completely intact, but that method was not deployed here, resulting in us working for our supper. Slightly easier to consume, a plate of crispy coated and fried shrimp with spicy salt went down well if one is inclined to eat their shrimp shell and all (a practice I would not advise for steamed or boiled shrimp). The spice and salinity were muted but enough to keep me going back for sips of my Tsingtao and wondering if perhaps Bubba Blue forgot to mention something. 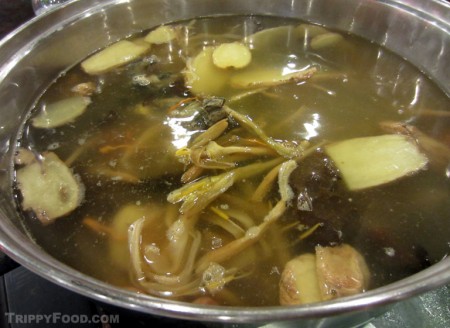 Lupe shared with us that almost all of the items he was preparing are featured on their extensive menu; the once mysterious “secret menu” is now largely published in the magnum opus that is the book-length menu available in print and on-line. Menu item #C12 (frog with spicy salt) was delightful; prepared in similar fashion to the shrimp, the frog was cut into nugget-sized pieces, dredged through the same complementary batter as the shrimp and then fried with chiles. The meat was tender and juicy and the preparation was the perfect entry-level excursion into eating the amphibian athlete – it didn’t resemble the animal in any possible way. As if to remind us what we were eating, our server Jason was dispatched to the kitchen, arriving back at the table a moment later with a colossal live bullfrog that had to be restrained from leaping onto the table; I don’t think he recognized his flash-fried family member on the plate. I was pleased to have another go at one of my favorite dishes at Hop Woo – menu item #24: duck tongue with Maggi sauce. This was my third outing with the avian mouthpiece and it didn’t disappoint; I’m almost afraid to try the dish elsewhere and face disappointment based on Eddie Lin’s experience with the odd delicacy. 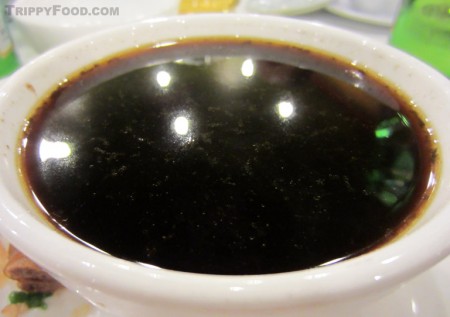 Chef Liang followed up the savory and salty appetizers with a barrage of some of his most exotic and widely varied soups. The first bowls to arrive were old favorites that didn’t have the initial shock value, but still raised a few eyebrows from the Vagabond Magazine contingency – menu items #45 (beef pizzle/penis), and #C38 (armadillo), both in Chinese herbal broth. These drew surprise, specifically from photographer Anna Schori who was shocked that both the armadillo meat and the bull penis didn’t taste as off-putting as she would have imagined. I was particularly intrigued when Lupe had a large cauldron brought out and stated that it was soup featuring black chicken. Black chicken (also known as silkie) is an unusual yard bird that has black skin, flesh and even bones; the species is said to benefit kidney and liver problems as well as containing amino acids that are said to increase the production of blood cells and hemoglobin. Lupe explained that from a Chinese apothecarial standpoint, the silkie is beneficial to women who are pregnant – all I know is that the soup was stocked with fresh ingredients such as wood ear fungus, and orange fungus referred to as “winter worm/summer grass flower” (which is a parasitic fungus that grows out of a moth caterpillar) and chunks of the dark chicken meat. The taste of the chicken was somewhat milder and sweeter than your average grocery store variety, and since it was chopped it was interesting to extract small bits of bone from each spoonful. 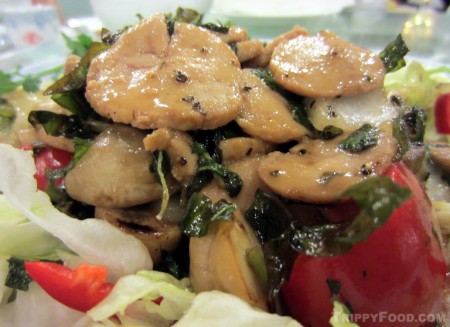 It was a pleasure to sample Hop Woo’s shark fin soup (menu item #36) once again before the California state ban takes effect; the brew was thick and bubbling hot with the bamboo sprouts and shark having more firm texture than the last bowl, the gilded trivet creating a regal presentation at the table. The last soup was Chef Liang’s pride and joy, a rare dish that few get to enjoy – deer penis soup. The soup came to the table in a covered pumpkin-shaped ceramic tureen that added an air of mystery to the contents; Lupe brought out a plate with the dried ingredients used in the creation of the dish, including wolfberries, “dragon eyes” (longan fruit), red dates, ho shou wu (an herb resembling thick twigs), dark black cao radix that looked like chunks of burnt rubber, paper-like strips of ribbed du zhong (eucommia bark), and the pièce de résistance – Bambi’s manhood. Initially the brew was touted as an energy tonic (it was consumed by Chinese athletes at the 2008 Summer Olympics), but as with most Chinese herbs each of the ingredients had additional medicinal purposes. When the cover was lifted off the tureen, the soup was a black, watery pool that was so dark that we couldn’t see any of the secrets held deep inside. The soup ladled into bowls looked like coffee; because of the dried fruit used it had a sweet aroma and an equally sweet taste, and seemed more appropriate as a hot drink than a soup. 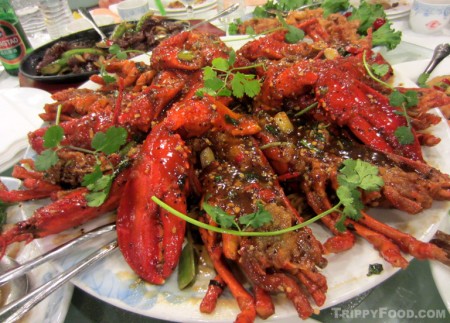 Once the soup courses were finished, Chef Liang brought out more substantial dishes (menu item #C31) – the first was what is often referred to as “lamb eggs”, although they are the southernmost orbs that hang behind the male lamb. One of our guests referred to the lamb progeny as Rocky Mountain Oysters, although Catskill Mountain Oysters would probably be more appropriate. The testes were sliced into medallions, the largest of which had the diameter of a half-dollar with a firm texture and the appearance of a dark water chestnut. These imparted a nutty flavor (pun intended) without any undercarriage funk with the flavor enhanced by the yellow and green onion, bell pepper, chiles, and basil they were stir fried with.  More traditional meat items included stir-fried filet mignon strips with asparagus in a black pepper sauce (menu item #86) and Secret Menu item #5 – deer meat stir fried with leeks and star melon, a flavorful favorite. 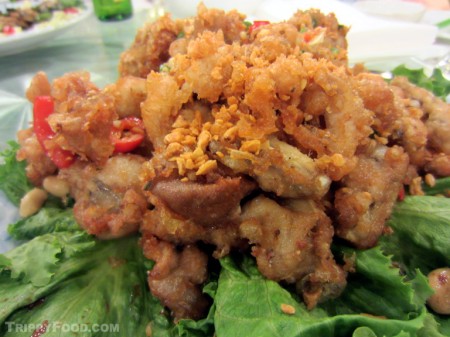 Just when we assumed there was no food left in the kitchen a platter emerged from the swinging door that looked like the massacre of a lobster village; several neatly bisected lobster were laid in Esther Williams poses on the serving dish, nestled in a bed of stir-fried noodles with their claws neatly arranged at the rim. The house special lobster (menu item #S1) is Hop Woo’s specialty and with the superb taste and incredible price tag (under $10) one has to wonder why they even have to put up large banners advertising it. I can’t even begin to deconstruct the sauce, although garlic and chiles were certainly present in the thick gravy clinging on to the tender and sweet exposed meat. For those imagining that there’s a freezer with these pre-cooked crustaceans in the back, the tank of wistful-looking lobsters over the table is a dead giveaway that they’re beyond fresh. 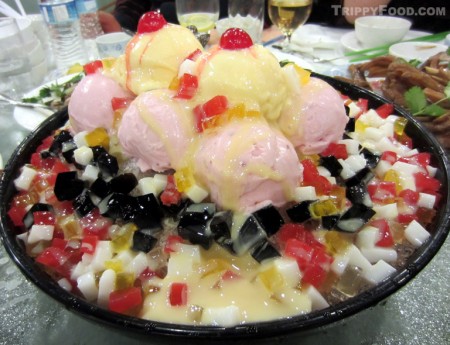 Despite our Roberto Duran pleas of “Mo mas!” and insistence from Chef Liang that we were done, a mammoth bowl was placed in the middle of the table that was as colorful as it was formidable. The behemoth Mixed Fruit Ice Cream Plate (menu item #D33) was a festive frozen concoction of Himalayan proportions; tiny cubes of fruit gelatin lay strewn across a bed of shaved ice with dark grass jelly and white coconut jelly providing contrast to the brightly-hued field. This was topped with 6 huge scoops of strawberry ice cream that played pyramid base to a couple of mammalian scoops of mango ice cream, each strategically topped with a maraschino cherry half; the whole playground was then drizzled with a coconut sauce. The grass and coconut jellies played off the other sweet ingredients well and although we couldn’t be faulted for trying, we had already hit a food wall, throwing in the towel and going down for the count.

A visit to Hop Woo is always an adventure and I think Linda and Anna may have walked away like kids after their first trip to the circus. With every visit I wonder how Chef Liang can possibly top the previous culinary experience, and yet he always manages to deliver the goods. If your curiosity gets the better of you, come with me and you’ll be in a world of pure imagination.

NOTE: This cost for this meal was provided by the restaurant. The content provided in this article was not influenced whatsoever by Hop Woo.